What is sin and its consequences?

I am looking for advice on how to explain the consequences of sin to people. How do I explain sin to a non-believer and that it is bad in a way that makes sense to them! I know we’re called to faithfully proclaim the good news of Jesus with the aim to persuade. How do I explain that sin provokes Gods wrath and He will punish us for our wickedness.

Imagine that you jumped off a one hundred-twenty floor skyscraper and you are rapidly falling to the concrete road below. As the seconds pass, you can sense that gravity is causing your fall to accelerate. You are going to smash the ground with an incredible force breaking just about every bone you have. You are going to die. Then at about the thirty-third floor, you realize that you made a mistake. As you fall past the twentieth floor you ask God to forgive you and as you pass the tenth floor God says, “I will forgive you.” Splat! Splat! Splat! 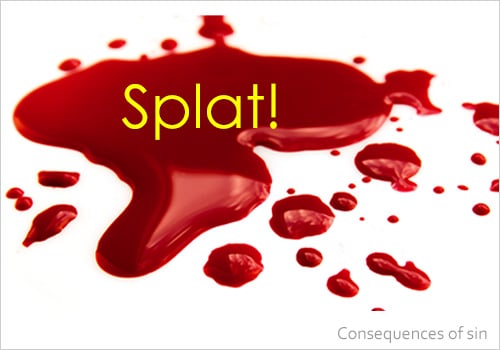 The illustration is a good definition of sin and its consequences. God tells us that sin is lawlessness. In 1 John 3:4 God says,

Let no one say when he is tempted, “I am being tempted  by God”; for God cannot be tempted  by evil, and He Himself does not tempt anyone. But each one is tempted when he is carried away and enticed by his own lust. Then when lust has conceived, it gives birth to sin; and when sin is accomplished, it brings forth death. James 1:13-15 (NASB)

What is sin? Here are two lists of sins. Neither one is exhaustive, but each one will give us some good examples of sin.

And just as they did not see fit to acknowledge God any longer,  God gave them over to a depraved mind, to do those things which are not proper, being filled with all unrighteousness, wickedness, greed, evil; full of envy, murder, strife, deceit, malice; they are gossips, slanderers, haters of God, insolent, arrogant, boastful, inventors of evil, disobedient to parents, without understanding, untrustworthy, unloving, unmerciful; 32 and although they know the ordinance of God, that those who practice such things are worthy of  death, they not only do the same, but also  give hearty approval to those who practice them. Romans 1:28-32 (NASB)

Now the deeds of the flesh are evident, which are: immorality, impurity, sensuality, idolatry, sorcery, enmities, strife, jealousy, outbursts of anger,  disputes, dissensions, factions, envying, drunkenness, carousing, and things like these, of which I forewarn you, just as I have forewarned you, that those who practice such things will not inherit the kingdom of God. Galatians 5:19-21 (NASB)

These are examples of sin. Now it is possible that someone might think that they do not sin, but listen to Romans 3:23,

What Are The Earthly Consequences of Sin?

. . . because that which is known about God is evident within them; for God made it evident to them. Romans 1:19 (NASB)

In Romans 1:20-22 God says the universe itself gives evidence that He exists, and those who reject the evidence are fools. How else can someone discover a God who is invisible?

For since the creation of the world His invisible attributes, His eternal power and divine nature, have been clearly seen, being understood through what has been made, so that they are without excuse. For even though they knew God, they did not  honor Him as God or give thanks, but they became  futile in their speculations, and their foolish heart was darkened. 22  Professing to be wise, they became fools . . . Romans 1:20-22 (NASB)

God tells us that those who completely reject Him are given over to their fleshly lusts, including their sexual urges.

Therefore God gave them over in the lusts of their hearts to impurity, so that their bodies would be dishonored among them.  Romans 1:24 (NASB)

This is judgment on those who reject God; later at the great White Judgment, they will be judged and sentenced to hell.

The Minor Prophets (Joel – Malachi) record announcements of God’s judgment on the entire nation of Israel and Judah because they committed sins and rejected God. The examples are too numerous to cite. Here is just one example,

Listen to the word of the Lord, O sons of Israel,
For the Lord has a case against the inhabitants of the land,
Because there is no faithfulness or kindness
Or knowledge of God in the land.
There is swearing, deception, murder, stealing and adultery.
They employ violence, so that bloodshed follows bloodshed.
Therefore the land mourns,
And everyone who lives in it languishes
Along with the beasts of the field and the birds of the sky,
And also the fish of the sea disappear.
Hosea 4:1-3 (NASB)

Notice that God announces that the reason for the bloodshed, violence, misery in the land and famine is because they have rejected Him and are committing sin. God knows how to make non-Christians and Christians miserable when we sin and reject Him.

What Are The Eternal Consequences of Sin?

The consequences or wages of sin is what happened when the person hit the concrete road in the opening  illustration after falling one hundred-twenty feet. Splat! Splat! Splat! In the spiritual sense, every person who rejects God’s forgiveness will also go splat! Splat occurs when such a person rejects Christ. They will go to hell or the lake of fire where they will suffer forever. That is what we mean by splat!

How can one escape the consequences or wages of sin? Romans 6:23 told us that we can only escape through Jesus Christ. Four chapters later we discover how Jesus can forgive our sins and rescue us from eternal condemnation.

. . . if you confess with your mouth Jesus as Lord, and  believe in your heart that God raised Him from the dead, you will be saved; for with the heart a person believes, resulting in righteousness, and with the mouth he confesses resulting in salvation. For the Scripture says, “Whoever believes in Him will not be disappointed.” Romans 10:9-11 (NASB)

The phrase “for with the heart a person believes” means that we can escape eternal judgment if we believe Jesus Christ died and was resurrected from the dead. John 8:24, 58 and 10:33 reveals that Jesus was God. 1 Corinthians 15:3-4 tells us,

We have defined sin, discovered the consequences of sin and found out how to escape those consequences. We have also discovered that we do not need to go splat after we die.  We can escape certain spiritual death. Now realize that you have already jumped off that one hundred-twenty floor skyscraper and you are falling if you are not a Christian. What will you do?

Searching For God
Heaven, Paradise, Sheol, Hell & Hades
Is salvation by grace through faith alone?
How can I be at peace with God?