Paul and Silas revisited the places in Asia Minor where Paul had preached on his first journey (cf. map), while Barnabas took John Mark and sailed to Cyprus. Paul and Silas visited Derbe, Lystra, and Antioch in Pisidia. From there Paul and Silas traveled to Troas, where Paul received a vision of a man from Macedonia calling to them. Crossing into Europe, they passed through several towns along the Egnatian Way and traveled to the cities of Athens and Corinth in southern Greece. Then sailing to Ephesus and Caesarea, they visited the church in Jerusalem before returning to Antioch of Syria. 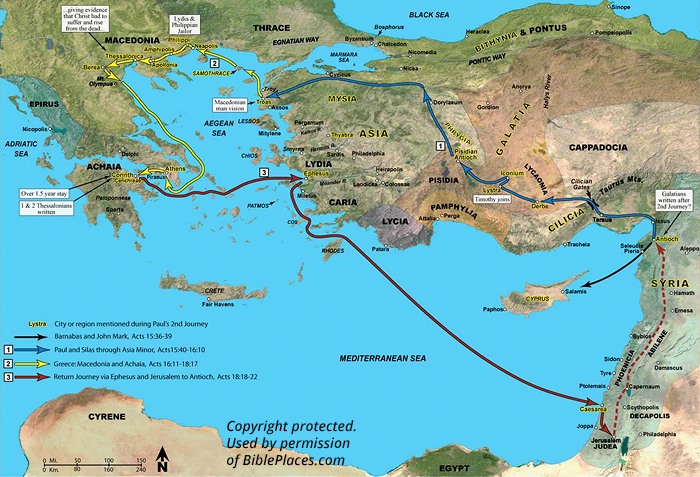 The following is the itinerary of Paul and Barnabas. The timeline indicates that they spent about three months revisiting the churches in Asia Minor or the region of Galatia.

One of the most significant conversions that occurred during this trip was in Philippi. Acts 16:14 reports that Lydia, a seller of purple fabrics, believed in Jesus Christ and became a Christian. Another significant event occurred  when the Bereans examined Scripture to determine if the apostle Paul was telling the truth about Christ. In Acts 17:22-32 Paul shared Christ with the men in Athens. In Acts 18:1-17 some Corinthians became Christians.