What does it mean that the Bible is inspired? – Inspiration of Scripture

What does it mean that the Bible is inspired?

The concept of inspiration does not mean that the Bible is exciting to read or that someone was unusually creative but that God wrote the Bible. 2 Timothy 3:16 says that all Scripture is inspired.

All Scripture is inspired by God and profitable for teaching, for reproof, for correction, for training in righteousness . . . 2 Timothy 3:16 (NASB)

The Greek word translated as inspired is theopneustos. This is a compound word composed of theos, which means God, and pveo, which means to breathe.  That is, it means “God breathed.” When people speak words, we exhale air through the vocal cords. The message is simply that God has spoken to us in the Scripture of the Bible. 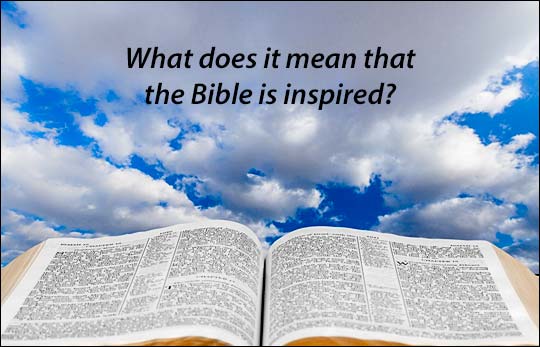 Method of Inspiration of Scripture

2 Peter 1:21 helps us understand why the Bible is inspired by telling us how God wrote it.

Examples of Inspiration of Scripture

The Spirit then entered me and made me stand on my feet, and He spoke with me and said to me, “Go, shut yourself up in your house. As for you, son of man, they will put ropes on you and bind you with them so that you cannot go out among them. Moreover, I will make your tongue stick to the roof of your mouth so that you will be mute and cannot be a man who rebukes them, for they are a rebellious house. But when I speak to you, I will open your mouth and you will say to them, ‘Thus says the Lord GOD.’ He who hears, let him hear; and he who refuses, let him refuse; for they are a rebellious house.” Ezekiel 3:24-27 (NASB)

In Micah 3:8 we are told that the prophet Micah was directed by the Holy Spirit.

On the other hand I am filled with power —
With the Spirit of the LORD —
And with justice and courage
To make known to Jacob his rebellious act,
Even to Israel his sin.
Micah 3:8 (NASB)

Another Old Testament passage to read is Zechariah 7:12. In the New Testament Acts 4:25 reveals the dual authorship of Scripture. In this verse we are told that David and the Holy Spirit wrote Psalm 2:1-2.

. . . who by the Holy Spirit, through the mouth of our father David Your servant, said,
“WHY DID THE GENTILES RAGE,
AND THE PEOPLES DEVISE FUTILE THINGS?” Acts 4:25 (NASB)

Acts 28:25-26 states that Isaiah and the Holy Spirit are the two authors.

In 1 Corinthians 7:40 Paul indicates that he had been guided by the Holy Spirit as he wrote.

What are “liberal,” “neoorthodox,” and “conservative” views of inspiration?
What Is The Bible? – Discipleship Series
How has God revealed Himself? – General and Specific Revelation
What books belong in the Bible? – Canon of Scripture
Does the Bible contain errors, discrepancies, contradictions or mistakes?
Why We Can Trust The Bible — inspiration and the canon of Scripture