Were all the sins of the world placed on Jesus at His baptism?

In order for the sins of Israel to be covered, the high priest laid his hands on the sacrificial lamb and transferred all their sins onto it. Then the lamb was taken into the desert. The people could see their sins being taken away. If this represented how Jesus was going to take away our sins, then when John the Baptist, acting as a high priest, baptized Jesus, he transferred all the sins of the world onto Jesus. Here we see that Jesus carried the offense (sin) and then He would have to pay the penalty of death. What happened to Jesus after John the Baptist transferred all the world's sins onto Jesus? Like the goat that carried the sins, He was led into the desert. We see that Jesus was led into the desert by the Holy Spirit. That is why Jesus could say during His ministry, ’your sins are forgiven’ as Jesus knew he was carrying their sins and Jesus knew HE was going to pay the penalty for all of us.

The baptism of Christ is recorded in Matthew 3:13-17; Mark 1:9-11 and Luke 3:21-22. The Matthew account gives us the most information about what happened at Jesus’ baptism. Some individuals believe that the sins of the world were transferred onto Jesus when John the Baptist baptized Him.

It has been proposed that John the Baptist laid his hands on Jesus and transferred all the sins of the world onto Jesus at His baptism. The theory states that Jesus is like the scapegoat on the Day of Atonement described in Leviticus 16 when the high priest transferred the sins of Israel onto the scapegoat. Then the scapegoat was released into the wilderness. This theory finds strength in the fact that Jesus went into the wilderness to be tested by the devil after His baptism. The theory then says Jesus died for the sins of the world on the cross.

Therefore, the question this article answers is, “Were all the sins of the world placed on Jesus at His baptism?” 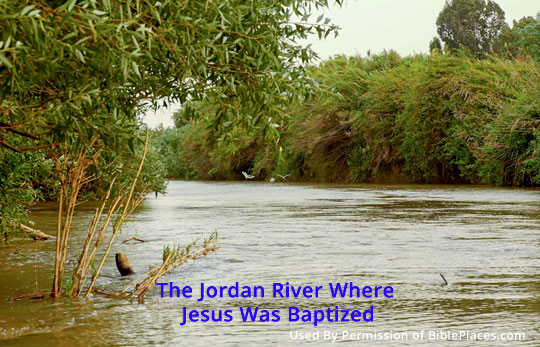 Matthew 3:13-17 tells us that John the Baptist tried to prevent Jesus from being baptized. But Jesus insisted saying that He needed to be baptized in order to fulfill all righteousness.

Then Jesus arrived from Galilee at the Jordan coming to John, to be baptized by him. But John tried to prevent Him, saying, “I have need to be baptized by You, and do You come to me?” But Jesus answering said to him, “Permit it at this time; for in this way it is fitting for us to fulfill all righteousness.” Then he permitted Him. After being baptized, Jesus came up immediately from the water; and behold, the heavens were opened, and he saw the Spirit of God descending as a dove and lighting on Him, and behold, a voice out of the heavens said, “This is My beloved Son, in whom I am well-pleased.” Matthew 3:13-17 (NASB)

Then John the Baptist baptized Christ. Notice that then we are told Jesus came up out of the water. Also, we are told that John the Baptist saw the Spirit of God descend like a dove onto Jesus and then everyone heard a voice from heaven announce, “This is My beloved Son, in whom I am well-pleased.” That is everything we are told about the baptism of Christ. Neither Mark 1:9-11 and Luke 3:21-22 add anything new.

What Happened During Jesus’ Baptism?

Now we are ready to answer the question “Were all the sins of the world placed on Jesus at His baptism?” There are five reasons why the answer to the question is no. That is, the theory is not supported by Scripture.

Third, the theory states that Jesus was a lamb, but on the Day of Atonement two goats were used. No lamb was used or sacrificed. The first goat was sacrificed before the high priest laid both of hands on the head of the second, live goat (Leviticus 16:21). In this theory their order of events involving Jesus is in the wrong sequential order.

Fourth, Leviticus 16:22 required that the live goat be released into the wilderness. It was never killed. Therefore, Jesus was not like the scapegoat. The scapegoat was not killed but Jesus was killed. He was crucified on the cross.

Fifth, 1 Peter 2:24 teaches that Christ bore our sins on the cross.

He Himself bore our sins in His body on the cross, so that we might die to sin and live to righteousness; for by His wounds you were healed. 1 Peter 2:24 (NASB)

The gospels indicate that while He hung on the cross He cried out, “My God, My God, why have you forsaken Me?”

About the ninth hour Jesus cried out with a loud voice, saying, “ ELI, ELI, LAMA SABACHTHANI?” that is, “MY GOD, MY GOD, WHY HAVE YOU FORSAKEN ME?” Matthew 27:46 (NASB)

We believe this occurred in response to the sins of the world being placed on Christ while He hung on the cross. The effect of the weight of the evil of the sins of the world upon Him was more than He had anticipated, and momentarily, God the Father, figuratively speaking, turned His back on Christ. Hebrews 9:28 also states that Christ bore our sins.

The theory is not biblically accurate. There are least five significant reasons why the sins of the world were not placed on Jesus at His baptism.

Jesus was baptized for several reasons. First, He fulfilled the promise God made to John that he could recognize the Messiah when the Holy Spirit descended upon the Messiah.

“I did not recognize Him, but He who sent me to baptize in water said to me, ‘He upon whom you see the Spirit descending and remaining upon Him, this is the One who baptizes in the Holy Spirit.’” John 1:33 (NASB)

The second reason Jesus had to be baptized is that it symbolized His coming death and resurrection. Jesus said later in His ministry that He had a baptism to undergo.

But I have a baptism to undergo, and how distressed I am until it is accomplished! Luke 12:50 (NASB)

Third, the baptism of Jesus also demonstrated the baptism that every Christian is to participate in as an identification of submission to Christ (Matthew 28:19-20). In a very real sense, He declared His submission to God the Father (Hebrews 10:5-9). His baptism was symbolic of our baptism which symbolizes that we are His disciple. We die to our self and rise to new life in Him.

Fourth, Jesus’ baptism is a complete identification with humanity (Isaiah 53:12).

Fifth, His baptism symbolized the beginning of His Messianic ministry (Matthew 3:17).

Why does the gospel of Mark begin with the baptism of Jesus?
Why was Jesus baptized and what was the importance of that?
Baptism of Jesus
What type of baptismal ceremony is right?
Was Cornelius saved during water baptism?
Were the sins of the world placed on Jesus or in Him at death?