Is the unforgivable sin denying that someone is doing the will of God?

Is the unforgivable sin denying that someone is doing the will of God? 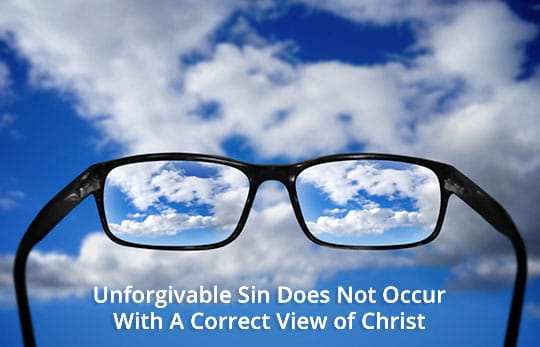 Matthew 12:24-32 provides the best explanation of the unforgivable sin. We must start with verses 22-24 where we are told that Jesus had just cast out a demon from a man. The people were amazed and wondered if Jesus was the Son of David or the Messiah. This panicked the Pharisees.  The summary of their private conversation is recorded for us. Their conversation reveals that they believe Jesus was healing people by the power of Beelzebul, another name for Satan.

Then a demon-oppressed man who was blind and mute was brought to him, and he healed him, so that the man spoke and saw. And all the people were amazed, and said, “Can this be the Son of David?” But when the Pharisees heard it, they said,“It is only by Beelzebul, the prince of demons, that this man casts out demons.” Matthew 12:22-24  (NASB)

Then we are told that Jesus knew what they were thinking even though they were talking privately. The essence of their discussion was that Jesus was not casting out demons by the Holy Spirit but by Satan. Then Jesus explained to the Pharisees and the crowd that He was not performing His miracles by the power of Satan (v. 25-30). Jesus’ question was, “Why would Satan work against himself?”

And knowing their thoughts Jesus said to them, “Any kingdom divided against itself is laid waste; and any city or house divided against itself will not stand. If Satan casts out Satan, he is divided against himself; how then will his kingdom stand? If I by Beelzebul cast out demons, by whom do your sons cast them out? For this reason they will be your judges. But if I cast out demons by the Spirit of God, then the kingdom of God has come upon you. Or how can anyone enter the strong man’s house and carry off his property, unless he first binds the strong man? And then he will plunder his house. He who is not with Me is against Me; and he who does not gather with Me scatters.” Matthew 12:25-30  (NASB)

The message was that if He was not performing His miracles by Satan then the only other power that could perform miracles is the Spirit of God. Then Jesus stated that the unforgivable sin was giving credit from the miracles performed by the Holy Spirit to Satan.

The reason that this sin is unforgivable is that if a person concludes that Jesus performed miracles by Satan and not the Holy Spirit, then how can a person ever believe that Jesus is God or the Messiah? John 20:30-31 states that the miracles performed by Christ are signs that He is God.

Therefore many other signs Jesus also performed in the presence of the disciples, which are not written in this book; but these have been written so that you may believe that Jesus is the Christ, the Son of God; and that believing you may have life in His name. John 20:30-31 (NASB)

Mark’s Explanation of The Unforgivable Sin

The gospel of Mark also says that anyone who concludes that Jesus’ miracles were not performed by the Holy Spirit (Luke 5:17) can never be forgiven. Why? Because they will never come to faith since they will have concluded that Jesus is not God.  Those who conclude that Jesus was able to perform miracles because He was demon-possessed have completely and finally rejected Jesus Christ. It is an eternal sin. Such a conclusion is a rejection that Jesus was God and our Savior from sin. It is eternal sin because they will never believe in Jesus as both Savior and Lord.

Truly I say to you, all sins shall be forgiven the sons of men, and whatever blasphemies they utter; but whoever blasphemes against the Holy Spirit never has forgiveness, but is guilty of an eternal sin — because they were saying, “He has an unclean spirit.” Mark 3:28-30 (NASB)

Luke’s Explanation of the Unforgivable Sin

The gospel of Luke provides a summary of the unforgivable sin.

We have discovered that the unforgivable sin is not speaking against others who are doing the “will” of God. The unforgivable sin can only be committed when someone who rejects Jesus Christ Jesus after coming to full knowledge of about Him. They have heard about the miracles and works He performed, and then concluded He is not God and reject Him. That is the sin that cannot be forgiven. For Scripture says salvation is only found in Christ.

And there is salvation in no one else; for there is no other name under heaven that has been given among men by which we must be saved. Acts 4:2 (NASB)

The unforgivable sin is the ultimate rejection of Christ. This sin can be committed today!

What is the unforgivable sin? — Blasphemy of The Spirit
How does one blaspheme against the Holy Spirit and what does it mean?
Is there a sin that God will not forgive? When does He forgive?