Is Satan a serpent, dragon, devil or a cherubim? — The Evil One

Is Satan a serpent, dragon, devil or a cherubim? — The Evil One

Satan is referred to in eight of the Old Testament books. He also appears in nineteen of the twenty-seven books of the New Testament. It is impressive that every writer of the New Testament refers to him. This study is concerned with the question, “Is Satan a serpent, dragon, devil or a cherubim? 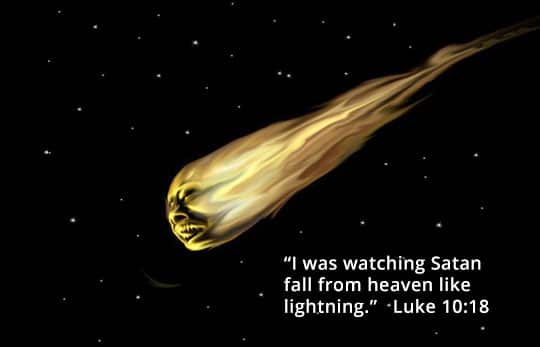 Satan Is A Cherub

Ezekiel 28:14 tells us that Satan was a cherub, one type of angel, and he used to dwell in heaven. In this verse heaven is referred to as “the holy mountain of God.”

You were the anointed cherub who covers,
And I placed you there.
You were on the holy mountain of God;
You walked in the midst of the stones of fire.
Ezekiel 28:14 (NASB)

Isaiah 14:12 adds that this cherub was called the “Star of the Morning” or the “Son of Dawn.” When he was cast out of heaven he fell to the earth. Then he planned to attack the peoples of the earth.

How you have fallen from heaven,
O star of the morning, son of the dawn!
You have been cut down to the earth,
You who have weakened the nations!
Isaiah 14:12 (NASB)

In Luke 10:18 Jesus states that He saw Satan fall from heaven.

And He said to them, “I was watching Satan fall from heaven like lightning. Luke 10:18 (NASB)

These three passages together teach us that Satan was a cherub in heaven and God cast him down to the earth. Today, he is at war against God and we are his victims.

Satan Is Called A Serpent

Genesis 3:1 refers to the serpent that tempted Eve.

Now the serpent was more crafty than any beast of the field which the LORD God had made. And he said to the woman, “Indeed, has God said, ‘You shall not eat from any tree of the garden’?” Genesis 3:1 (NASB)

Here we discover that the serpent talked to Eve. It becomes clear from Scripture that the animal was possessed by the cherub. In verse fourteen the animal was condemned to crawl on the ground for allowing the cherub to possess it.

The LORD God said to the serpent,
“Because you have done this,
Cursed are you more than all cattle,
And more than every beast of the field;
On your belly you will go,
And dust you will eat
All the days of your life . . .”
Genesis 3:14 (NASB)

2 Corinthians 11:3 refers to the same event.

But I am afraid that, as the serpent deceived Eve by his craftiness, your minds will be led astray from the simplicity and purity of devotion to Christ. 2 Corinthians 11:3 (NASB)

Now we are ready to answer the question. Revelation 12:7-9 reveals that Satan is also called a dragon, great dragon, the devil and “the serpent of old.”

Consequently, we understand that Satan is an angel, a cherub, and is also figuratively called the “the serpent of old” or “serpent.”

Where did Satan come from? – Creation and Fall of Satan
Is Satan an angel?
Did God know and plan For Satan to tempt Adam and Eve?
Angels – Good and Evil
Signs that Your Father is the Devil
Seventy Disciples Return With Joy