Is God impartial? Why does He allow some people more time to repent than others before He washes His hands of them? Some people know the truth about God and continue sinning, and in a short period of time lose their salvation. Yet, others know the truth and sin for years, even decades, and then find God's forgiveness. Doesn't God treat these people differently? 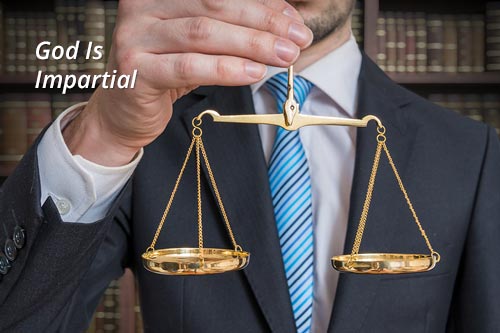 The answer is yes, because our God is holy and righteous (Revelation 15:4) and He is not like us (Numbers 23:19). These only describe two aspects of the character of God. We should grieve because we are not like Him. We are sinners (Romans 3:23) who seek our own desires and pleasures (Ecclesiastes 7:29).

God made men upright, but they have sought out many devices. Ecclesiastes 7:29 (NASB)

The Principle – God Is Impartial

Deuteronomy 10:17 gives us the principle that God is impartial.

For the LORD your God is the God of gods and the Lord of lords, the great, the mighty, and the awesome God who does not show partiality nor take a bribe. He executes justice for the orphan and the widow, and shows His love for the alien by giving him food and clothing. Deuteronomy 10.17 (NASB)

In our nation and other nations the powerful and wealthy are favored sometimes by the legal system, but that is not true of God. He treats everyone the same whether the person is a orphan, widow or an alien. He provides justice to all.

If you address as Father the One who impartially judges according to each one’s work, conduct yourselves in fear during the time of your stay on earth . . . 1 Peter 1:17 (NASB)

The Greek that is translated as impartially is aprosopolemptos. The word is “often used with reference to God’s judgment before which there is no respect of persons.”[1]  Ephesians 6:9; Colossians 3:25 teach us that God is not a respecter of persons. He is not influenced by our physical appearance, skills or success in life.

The Example – God Is Impartial

A great example that demonstrates God is impartial is found in James 2:1-7 where we are warned to not be biased or partial toward people. The key statement in the passage is as follows,

Listen, my beloved brethren: did not God choose the poor  of this world to be rich in faith and heirs of the kingdom which He  promised to those who love Him? But you have dishonored the poor man. Is it not the rich who oppress you and  personally  drag you into  court? Do they not blaspheme the fair name by which you have been called? James 2:5-7 (NASB)

Notice that God does not play favorites but we do. In Romans 2:3-5 we are told that God is not eager to punish us. In fact, God is tolerant and gives us time to repent. Those who do not repent store up wrath for themselves. Sometimes we experience His wrath in this life; if not, we will experience it after we die and the Judge of the Universe sentences us to the lLake of fire.

But do you suppose this, O man, when you pass judgment on those who practice such things and do the same yourself, that you will escape the judgment of God? Or do you think lightly of the riches of His kindness and tolerance and patience, not knowing that the kindness of God leads you to repentance? But because of your stubbornness and unrepentant heart  you are storing up wrath for yourself  in the day of wrath and revelation of the righteous judgment of God, Romans 2:3-5 (NASB)

This reveals that God is impartial; but He is also patient, not willing that any should perish,

The Lord is not slow about His promise, as some count slowness, but  is patient toward you, not wishing for any to perish but for all to come to repentance. 2 Peter 3:9 (NASB)

Therefore, when it appears to us that God is unjust in allowing others to escape punishment, we must remember that God is more tolerant and patient than we are. For example, He wanted the nation of Israel to repent after King Solomon’s reign, but they never did.  He sent some of the major and minor prophets and called Israel to repent over one hundred years. This reveals that God is patient and not eager to punish and what may appear as injustice is God being patient.

An example of immediate punishment occurs in Numbers 20 when Moses sinned (Numbers 20:9-11) and immediately God informed him that He would not enter the Promised Land after he had waited for 40 years (Numbers 20:12; Deuteronomy 3:25-26). God immediately punished Moses because he knew better and had a very close relationship with God. Moses did not escape punishment.

Those who believe that Christ died on a cross for their sins and returned to life should ask God to forgive their sins and turn their life over to Him. They will escape eternal punishment (John 3:16). Those who do not will not go to heaven. God is tolerant and patient because He gives every person a lifetime to make that decision.