Is anointing oil symbolic of the Holy Spirit?

Is anointing oil representative of the Holy Spirit?

In the Bible anointing with oil is symbolic of at least eight different important recognitions. The question that we are concerned with is, “Is anointing oil representative of the Holy Spirit?” What follows is a overview of the use of anointing in the Bible. 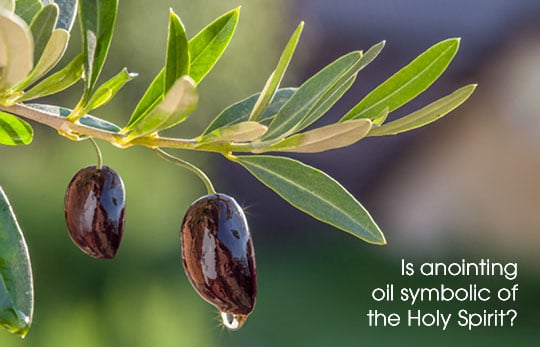 The first act of anointing that is described in Scripture is found in Genesis 28:18-19 when Jacob poured oil on a pillar.

So Jacob rose early in the morning, and took the stone that he had put under his head and set it up as a pillar and poured oil on its top. He called the name of that place Bethel . . . Genesis 28:18-19 (NASB)

Then in Genesis 31:13 while God is speaking to Jacob in a dream, God refers to this act as one of anointing.

I am the God of Bethel, where you anointed a pillar, where you made a vow to Me; now arise, leave this land, and return to the land of your birth. Genesis 31:13

The Hebrew translated as “anointed” is masah. It means “to sear or to wipe or to spread a liquid.” Deuteronomy 28:40 and Micah 6:15) indicates that olive oil was used in the act of anointing.

Later when Moses received instruction from the Lord, he was told to make “holy anointing oil” in Exodus 30:22-28. This oil was a mixture of oil and spices.

Moreover, the LORD spoke to Moses, saying, “Take also for yourself the finest of spices: of flowing myrrh five hundred shekels, and of fragrant cinnamon half as much, two hundred and fifty, and of fragrant cane two hundred and fifty, and of cassia five hundred, according to the shekel of the sanctuary, and of olive oil a hin. You shall make of these a holy anointing oil, a perfume mixture, the work of a perfumer; it shall be a holy anointing oil; With it you shall anoint the tent of meeting and the ark of the testimony, and the table and all its utensils, and the lampstand and its utensils, and the altar of incense, and the altar of burnt offering and all its utensils, and the laver and its stand.  Exodus 30:22-28 (NASB)

How Anointing Oil Was Used

The act of anointing usually occurred to set 1) a person or thing apart as holy and dedicated to the Lord, or 2) to confer authority on a person. What follows are eight examples of anointing.

You shall anoint Aaron and his sons, and consecrate them, that they may minister as priests to Me. Exodus 30:30 (NASB)

Anointing with oil was used in the act of consecrating men as priests in the Old Testament. We will discover later in 1 Samuel 16:13; Matthew 25:1-13 that the act of anointing symbolized the Holy Spirit. Therefore, it seems that the anointing of the priests symbolized His ministry through the priests.

Then Samuel took the horn of oil and anointed him in the midst of his brothers; and the Spirit of the LORD came mightily upon David from that day forward. And Samuel arose and went to Ramah. 1 Samuel 16:13 (NASB)

The act of anointing with oil also consecrated a man as God’s choice to be king over the nation of Israel. In 1 Samuel 16:13 we are told that the Holy Spirit came upon King David. That is, anointing implied the presence of the Holy Spirit in the life of the king.  In 1 Samuel 10:1, 6, 9 we discover that King Saul was anointed and the Holy Spirit was actively present in his life and changed his heart.

Why are the nations in an uproar
And the peoples devising a vain thing?
The kings of the earth take their stand
And the rulers take counsel together
Against the LORD and against His Anointed . . .
Psalm 2:1-2 (NASB)

The coming Messiah is also referred to as the Lord’s Anointed (Psalm 2:2). The verses that follow are about the coming Messiah (Psalm 2:4-7, 12). Acts 10:38 also reveals that this anointing included empowerment by the Holy Spirit.

Then the angel who was speaking with me returned and roused me, as a man who is awakened from his sleep. He said to me, “ What do you see?” And I said, “I see, and behold, a lampstand all of gold with its bowl on the top of it, and its seven lamps on it with seven spouts belonging to each of the lamps which are on the top of it; also two olive trees by it, one on the right side of the bowl and the other on its left side.” Then I said to the angel who was speaking with me saying, “What are these, my lord?”So the angel who was speaking with me answered and said to me, “Do you not know what these are?” And I said, “No, my lord.” Then he said to me, “This is the word of the LORD to Zerubbabel saying, ‘Not by might nor by power, but by My Spirit,’ says the LORD of hosts.” Zechariah 4:1-6 (NASB)

In Zechariah 4:1-7 we are reminded once again that olive oil or anointing oil symbolizes the Holy Spirit. In this passage the prophet Zechariah sees a seven armed, solid gold lampstand with a bowl on top. One olive tree is on the left side and one on the right side. Oil from the two trees is funneled into the bowl which then  provides oil to the seven branches which provide the light (Zechariah 4:12). Zechariah 4:6 tells us that this symbolizes the power of the Holy Spirit.

THE SPIRIT OF THE LORD IS UPON ME, BECAUSE HE ANOINTED ME TO PREACH THE GOSPEL TO THE POOR. Luke 4:18 (NASB)

Luke 4:18 records Jesus’ words after He read Isaiah 61:1-2. Here Jesus connects anointing with the empowerment of the Holy Spirit.

Now He who establishes us with you in Christ and anointed us is God, who also sealed us and gave us the Spirit in our hearts as a pledge. 2 Corinthians 1:21-22 (NASB)

Is anyone among you sick? Then he must call for the elders of the church and they are to pray over him, anointing him with oil in the name of the Lord . . .  James 5:14 (NASB)

Oil was often used for medical purposes as illustrated in Luke 10:34. In Luke 5:17 we are told the power of the Lord was present for Christ to heal. This is a reference to the power of the Spirit since Christ was indwelt by the Holy Spirit at both the beginning of and during His ministry (Luke 3:21-22; 4:1, 18; Acts 10:38). But in James 5:14 the elders are told to anoint the sick with oil and pray for them. This symbolizes the healing work of the Holy Spirit.

8. Anointing with oil can also symbolize the teaching work of the Spirit (1 John 2:27)

As for you, the anointing which you received from Him abides in you, and you have no need for anyone to teach you; but as His anointing teaches you about all things, and is true and is not a lie, and just as it has taught you, you abide in Him. 1 John 2:27 (NASB)

The eighth category of anointing in Scripture refers to the teaching ministry of the Holy Spirit in the life of a believer. Other passages teach the Holy Spirit helps Christians to minister to other believers in many ways.

As we have discovered, the act of anointing almost always symbolizes an act of the ministry of the Holy Spirit.