If I were left behind on Judgment Day, can I still be saved?

If I were to be left behind on Judgment Day, what would I have to do to show God that I believed and wanted to serve Him? Do I have to serve Him in the war against good and evil? Will I have to pass a certain test? Do I have to confront Him (i.e. “face him”) and be judged by Him?

There are at least two very serious events for non-Christians in God’s prophetic future. The first one is the rapture and the next one is judgment. There are other serious events, but these are probably the most important.

God is saying that we cannot do any good deeds that will gain His favor. He does not like our good deeds because He considers them to be filthy rags (Isaiah 64:6). So those who are left behind will not be able to gain God’s favor by good deeds. We need our sins forgiven in order to gain favor with God (Rom. 5:1). That is called being saved from our sins. That can only happen by believing in Jesus.

And there is salvation in no one else; for there is no other name under heaven that has been given among men, by which we must be saved. (NASB) Acts 4:12

The next major event in the prophetic timeline is the removal of all the saints from this world – the rapture. After that comes a terrible time of suffering called the tribulation. After the tribulation, Jesus Christ returns to earth. This is called the second coming of Christ – the Second Advent. 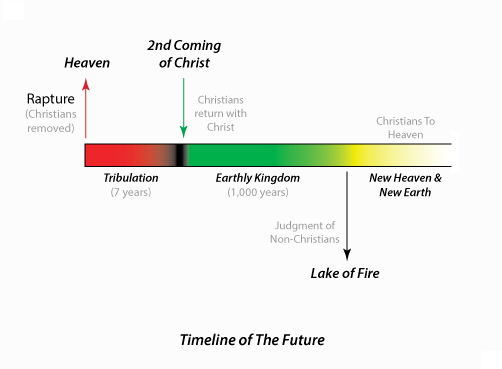 Jesus comes back to earth to set-up a 1,000 year kingdom on earth. Just before the kingdom is set-up, the bodies of all of the saints from all ages are raised (Rev. 20:4-5).

And I saw thrones, and they sat upon them, and judgment was given to them. And I saw the souls of those who had been beheaded because of the testimony of Jesus and because of the word of God, and those who had not worshiped the beast or his image, and had not received the mark upon their forehead and upon their hand; and they came to life and reigned with Christ for a thousand years. The rest of the dead did not come to life until the thousand years were completed. This is the first resurrection. (NASB) Rev. 20:4-5

All believers will then enter the kingdom and reign with Jesus. After the kingdom is over, Satan is allowed to lead a final rebellion against Christ and is defeated.

Then comes the Great White Throne judgment of all unbelievers of all ages after they are resurrected – the second resurrection. The works of unbelievers are then evaluated. God uses their sinful, self-centered works as the basis for sending them to hell or hades. God will send them to hell for at least three reasons: 1) unbelievers have rejected the evidence of God in nature (Rom. 1:18-21), 2) God’s standard of holiness and sin was placed into their mind (Rom. 2:14-16), and 3) they proved that they knew there was a moral standard of right and wrong because they judged others (Rom. 2:1-2). God will use all of this against them to show them they deserve hell.

And I saw a great white throne and Him who sat upon it, from whose presence earth and heaven fled away, and no place was found for them. And I saw the dead, the great and the small, standing before the throne, and books were opened; and another book was opened, which is the book of life; and the dead were judged from the things which were written in the books, according to their deeds. And the sea gave up the dead which were in it, and death and Hades gave up the dead which were in them; and they were judged, every one of them according to their deeds. And death and Hades were thrown into the lake of fire. This is the second death, the lake of fire. (NASB) Rev. 20:11-14

Notice that all believers were resurrected earlier in the chapter (Rev. 20:4-5) – the first resurrection. How they lived or what they did in this life was not judged. Why? The answer is that a Christian’s sins are forgiven at the moment he/she starts trusting Jesus for the forgiveness of his/her sins. The judgment at the end of time – there is no more time to do anything – is simply to prove to unbelievers that they deserve hell. Unbelievers will be evaluated. Their works will be judged and they will be sent to hell. Hell is then thrown into the Lake of Fire.

And inasmuch as it is appointed for men to die once and after this comes judgment . . . (NASB) Heb 9:27

There is no second chance after death. After we die, there is only heaven or a judgment which sends unbelievers to hell. The Roman Catholics believe there is a purgatory or an opportunity to pay for their sins and gain favor with God so that they enter heaven. But the Bible does not teach that. No one can find purgatory even mentioned in the Bible. God calls us to believe now and not wait

Today is the day of salvation. Now is the time to trust in Jesus.