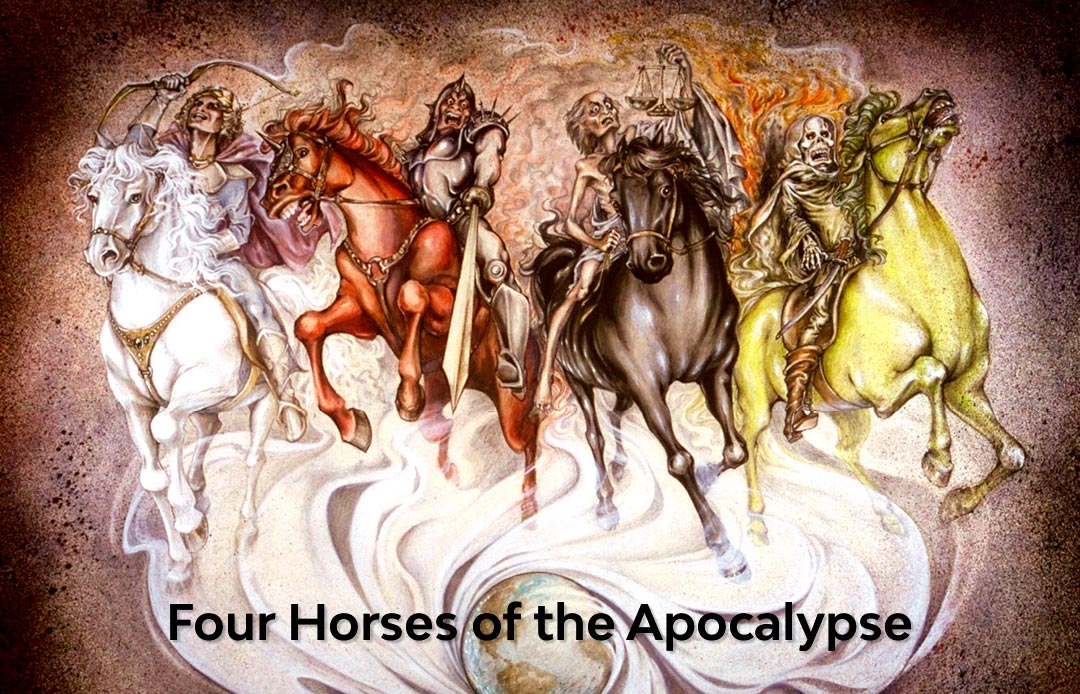 Some claim the four horsemen of the apocalypse can be found in the prophetic book of Ezekiel. A search of the book reveals that horses are mentioned sixteen times in twelve verses in the book (Ezekiel 17:15; 23:6, 12, 20, 23; 26:7, 10, 11; 27:14; 38:4, 15; 39:20), but never are they described as “four horses,” nor are they ever described as being of various colors. This is an important point as we will discover when we arrive at the book of Revelation. This means it is an error to claim the four horsemen of the apocalypse are described in the book of Ezekiel.

However, four horses are mentioned in the book of Zechariah (Zechariah 1:8-11). Zechariah 1:7 tells us that the prophet is writing and in verse 8 he says,

I saw at night, and behold, a man was riding on a red horse, and he was standing among the myrtle trees which were in the ravine, with red, sorrel and white horses behind him.”  Zechariah 1:8 (NASB)

Notice that the prophet does not mention the color of all four horses. He only mentions the color of three horses: red, sorrel, white. These horses appear again in Zechariah 6. It should be noted that “sorrel” refers to a mixture of red and white.

Now in Zechariah 6:1-6 four chariots are mentioned and each chariot is pulled by a group of horses, which are of different colors. The first horses are red (v. 2). The other horses are black, white, or dappled (v. 2-3). The Hebrew word for “dappled” refers to spotted. Then verse 5 explains these horses are the “four spirits of heaven.” Finally, verse 6 says that the black horses went north and the red horses went south. Verse 7 explains that the black and red horses patrolled the earth.

Four Horsemen of the Apocalypse — Revelation

Therefore, we should say the four horsemen of the apocalypse are found only in Revelation 6:1-8. The first horse, the white horse is described in verses 1-2.

Then I saw when the Lamb broke one of the seven seals, and I heard one of the four living creatures saying as with a voice of thunder, “Come.” I looked, and behold, a white horse, and he who sat on it had a bow; and a crown was given to him, and he went out conquering and to conquer. Revelation 6:1-2 (NASB)

Verse 2 explains the meaning of the color white. It represents “conquering.” That is, it symbolizes victory. It also symbolizes peace. This corresponds to the first 3.5 years of the seven-year-tribulation.

The red horse is the second horse and it is described in Revelation 6:3-4. The passage says,

When He broke the second seal, I heard the second living creature saying, “Come.” And another, a red horse, went out; and to him who sat on it, it was granted to take peace from the earth, and that men would slay one another; and a great sword was given to him. Revelation 6:3-4 (NASB)

Verse 4 explains the color red. It represents killing or blood. This is a description of what will happen during the last 3.5 years of the tribulation period.

The third horse is black. It is described in Revelation 6:5-6. The passage says,

When He broke the third seal, I heard the third living creature saying, “Come.” I looked, and behold, a black horse; and he who sat on it had a pair of scales in his hand. And I heard something like a voice in the center of the four living creatures saying, “A quart of wheat for a denarius, and three 1quarts of barley for a denarius; and do not damage the oil and the wine.” Revelation 6:5-6 (NASB)

Just as we have discovered in the previous verses, the following verse, verse 6, explains the meaning of the symbol. Black represents famine. This will also happen during the last 3.5 years of the tribulation period.

The fourth horse is ashen. It is described in Revelation 6:7-8. The passage says,

When the Lamb broke the fourth seal, I heard the voice of the fourth living creature saying, “Come.” I looked, and behold, an ashen horse; and he who sat on it had the name Death; and Hades was following with him. Authority was given to them over a fourth of the earth, to kill with sword and with famine and with pestilence and by the wild beasts of the earth. Revelation 6:7-8 (NASB)

Ashen symbolizes death. The color ashen is a pale greenish-gray, which represents decay. Revelation chapters 6-19 reveal that death will characterize the last half of the tribulation.

For information about what will happen in the tribulation visit the book of Revelation.

Book of Revelation
The Wake-Up Call
God’s Plan For The Future — What does the Bible say about the future?
God’s Timeline For The Future
What are the 7 seals, 7 trumpets, 7 signs and 7 bowls of Revelation? — The Tribulation
What will happen in heaven during the tribulation period?