Does Jesus Christ give the kingdom to God the Father?

Where will Jesus Christ be when He hands over the kingdom to God the Father?

1 Corinthians 15:23-24 answers the question, “Does Jesus Christ give the kingdom to God the Father?”

But each in his own order: Christ the first fruits, after that  those who are Christ’s at His coming, then comes the end, when He hands over the kingdom to the God and Father, when He has abolished all rule and all authority and power. 1 Corinthians 15:23-24  (NASB)

In these two verses the Holy Spirit provides a timeline starting with the resurrection of Christ and ending with Christ giving the kingdom to the Father. 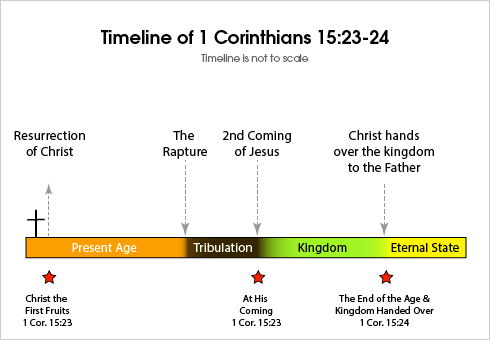 But now Christ  has been raised from the dead, the first fruits of those who are asleep. For since by a man came death, by a man also came the resurrection of the dead. 1 Corinthians 15:20 (NASB)

That is, Christ is the first fruits from among those who are dead. He was the first one to have been resurrected and go to heaven (Some had been brought to life only to die again such as Lazarus). Please note that the expression “who are asleep” refers to those are dead and awaiting resurrection. 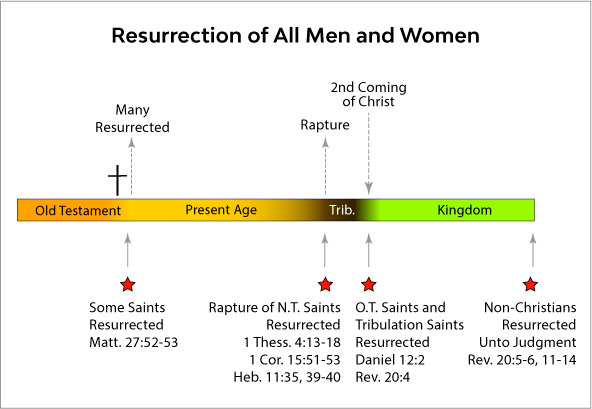 Christ was resurrected the third day after He died. He died on Friday, Nisan 14, A.D. 33 and returned to life on Sunday, Nisan 16, A.D. 33. Forty days later He ascended back to heaven (Acts 1:3, 9-11). Christ is the first fruits from among all Christians.

Those Who Are Christ’s At His Coming

The opening phrase of verse 23 reveals that the Holy Spirit is giving us a timeline for future resurrections when we are told “each in his own order.” Christ was resurrected first and next all Christians will wait for the second coming of Christ for it says, “after that those who are Christ’s at His coming.” When is Christ’s coming? There are two phases to Christ’s coming. The first phase is the rapture of all Christians prior to the tribulation as described in John 14:1-3; 1 Thessalonians 4:14-17 and 2 Thessalonians 2:1. The second phase is the second coming of Christ or the return of Christ (Matthew 24:3, 29-31;  Peter 1:16; 2 John 7; Revelation 19:11-21). The second coming of Christ will occur at the end of the Tribulation period.

Then Comes The End

Next we are told “then comes the end.” The Greek word that is translated as “end” is telos. The word refers to a period of time that ends. That is, “the end” refers to our current age. When Christ begins to reign over the world, “the end” is close.

The Kingdom Is Handed Over to the God and Father

“The end” is about 1,000 years away when Christ descends from heaven and defeats the nations of the world (Zechariah 14:1-5; Revelation 19:11-21).  Scripture teaches that next Christ will establish His kingdom and rule over the nations of the world subduing any rebellious nations and peoples (Joel 3:17-21; Zechariah 14:16-21; Revelation 19:11-21; 20:7-10). After the thousand year reign of Christ comes to an end, then Christ gives the kingdom to God the Father. Joel 3:1 and  Zechariah 2:10-12; 14:9-21 state that Messiah, the king, will be ruling in the city of Jerusalem. Therefore, He will apparently be ruling in Jerusalem when He hands the kingdom over to the Father. Then the Father destroys the universe and the old heavens and creates a new heaven and earth. The new heaven and earth is the eternal kingdom over which God the Father will rule.

Do not let your heart be troubled;  believe in God, believe also in Me. In My Father’s house are many dwelling places; if it were not so, I would have told you; for I go to prepare a place for you. If I go and prepare a place for you,  I will come again and receive you to Myself, that  where I am, there you may be also. John 14:1-3 (NASB)

Then the King will say to those on His right, “Come, you who are blessed of My Father, inherit the kingdom prepared for you from the foundation of the world.” Matthew 25:34 (NASB)

He says that God the Father prepared the kingdom before He created anything. In Psalm 2:6-7, 12 we are told that God the Father planned to have His Son, who is Jesus Christ, rule and reign as king in Zion, that is, in the city of Jerusalem. He is called “My King” Then after Christ rules as king for one thousand years, He gives the eternal kingdom to the Father. They will both reign but in different phases. Praise God for His wisdom and knowledge of God!  How unsearchable are His judgments and unfathomable His ways! (Romans 11:33).

Promise of Future Resurrection
Are the Old Testament saints resurrected at the rapture?
Why were people resurrected when Jesus died?
What are the 7 seals, 7 trumpets, 7 signs and 7 bowls of Revelation?
Prophecy of The Future