Does Job 42:11 teach that God approves of men wearing earrings?

I want to know where in the Bible does it specifically state that men cannot wear earrings? As a man I stopped wearing earrings because I was told the most high Elohim God did not approve of men wearing them. Yet throughout the Bible, you find passages like Job 42:11 which state Job was given golden earrings, and so were the Israelites. We are told that Aaron gathered all the earrings from all of their sons to build the false idol golden calf. Can men wear earrings?

Gold and silver rings appear throughout the Old Testament. They are used on various parts of the body and even on the tabernacle in the wilderness. The question we are concerned with is, “Does Job 42:11 teach that God approves of men wearing earrings?” Then we will explore if men today can wear earrings. 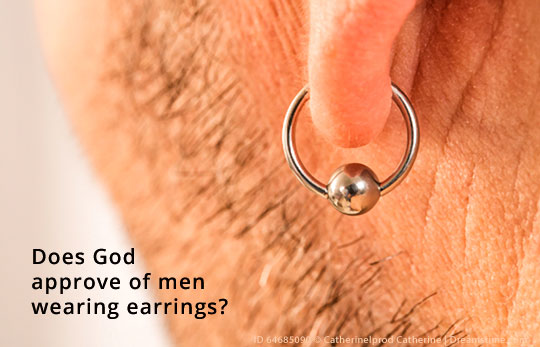 The book of Job reveals that we can suffer for a variety of reasons even though we have not committed sin. We discover in Job that he did not sin when he lost his children, homes and possessions. Most of the book of Job records the bad counseling  Job received from his three friends. They repeatedly accused him of committing sin and explained that was the reason for the disasters he experienced. In the last chapter, we are told that God rewarded him. In verse 11 we are told that Job’s friends and relatives gave him food, money and gifts.

Then came there unto him all his brethren, and all his sisters, and all they that had been of his acquaintance before, and did eat bread with him in his house: and they bemoaned him, and comforted him over all the evil that the LORD had brought upon him: every man also gave him a piece of money, and every one an earring of gold. Job 42:11 (NASB)

Notice that this verse tells us Job received “an earring of gold” from each of his friends. There are three Hebrews words that are translated as “ring” in the Old Testament. We will explain the two most important words, nezem and tabbaat. The third one, izqa, is translated as “signet ring” in Daniel 6:17. Then we provide the answer to our question.

Gold Rings In The Finger, Nose and Ear

The Hebrew word nezem appears 17 times in the Old Testament. It is translated in a variety of ways such as: gold rings for women (Genesis 24:22, 30), a nose ring for a women (Genesis 24:47) and earrings for Jacob’s wives (Genesis 35:4). In Exodus 32:2-3; 35:22 we are told that the Israelite wives, sons and daughters had earrings. Since the sons had earrings, most likely the husbands or adult men wore earrings also. Most likely this was a custom in Egypt that the Israelites adopted. In Judges 8:24-26 we find that the Ishmaelites gave up their gold rings (nezem), but we are not told what types of gold rings they were wearing. In Proverbs 11:22 nezem is used of gold rings in the snout of swine. In Proverbs 25:12 nezem is generally translated as earrings. Nezem is used of nose rings in Isaiah 3:21. But in both Job 42:11 and Hosea 2:13, nezem should be simply translated as a “ring or rings” as in modern Bible versions because that is the basic meaning of the word. The context must be considered to determine if the ring is for the finger, nose or earring.

The difference in meaning between nezem and tabbaat is that nezem refers to a luxury ring while tabbaat refers to an ornamental ring. Strictly speaking, nezem means “a closed metal circle as an adornment worn on the body.”[1]

A woman shall not wear man’s clothing, nor shall a man put on a woman’s clothing; for whoever does these things is an abomination to the LORD your God. Deuteronomy 22:5 (NASB)

The Hebrew that is translated as abomination in this verse is used in Leviticus 18:22 to describe God’s attitude toward homosexuality. Zephaniah 1:8 God warns men and women to not wear strange clothes. If they do, He will punish them for wearing foreign clothes.

Then it will come about on the day of the LORD’S sacrifice
That I will punish the princes, the king’s sons
And all who clothe themselves with foreign garments.
Zephaniah 1:8 (NASB)

What is foreign clothing? The Hebrew word that is translated as “foreign” can also mean “strange.” That is, the Israelites were not to wear the clothes of another culture. In 1 Peter 3:3-4 we discover the types of clothes women wore in the time of Christ.

Therefore, can men wear earrings? The answer depends upon the culture. If women normally wear earrings in the culture, then men are prohibited from wearing them. Historically, only women wore earrings in the Western cultures. But there has been a movement in recent years where men are increasingly wearing earrings and women are dressing like men. Women are wearing pants and other clothing designed for men’s wear.  Men are beginning to wear makeup and women’s underwear. Why is this occurring? One answer is that some women want to “empower” themselves by dressing like men. They are blurring the differences that God has established between men and women. Also, some men want to wear women’s underwear for sexual reasons. Such practices are an abomination to God (Deuteronomy 22:5) since He wants the distinction between men and women to be clearly obvious.

If you object, then examine Deuteronomy 22:5 and Zephaniah 1:8 yourself. Just be careful that you are not seeking to justify your desires.