Can men wear women’s clothes? What does Deuteronomy 22:5 mean?

Can men wear women's clothes? What does Deuteronomy 22:5 mean?

Deuteronomy 22:5 has two prohibitions wrapped into one verse.  The purpose of this Q&A is to determine the meaning of this verse. Here is the verse.

A woman shall not wear man’s clothing, nor shall a man put on a woman’s clothing; for whoever does these things is an abomination to the LORD your God. Deuteronomy 22:5 (NASB) 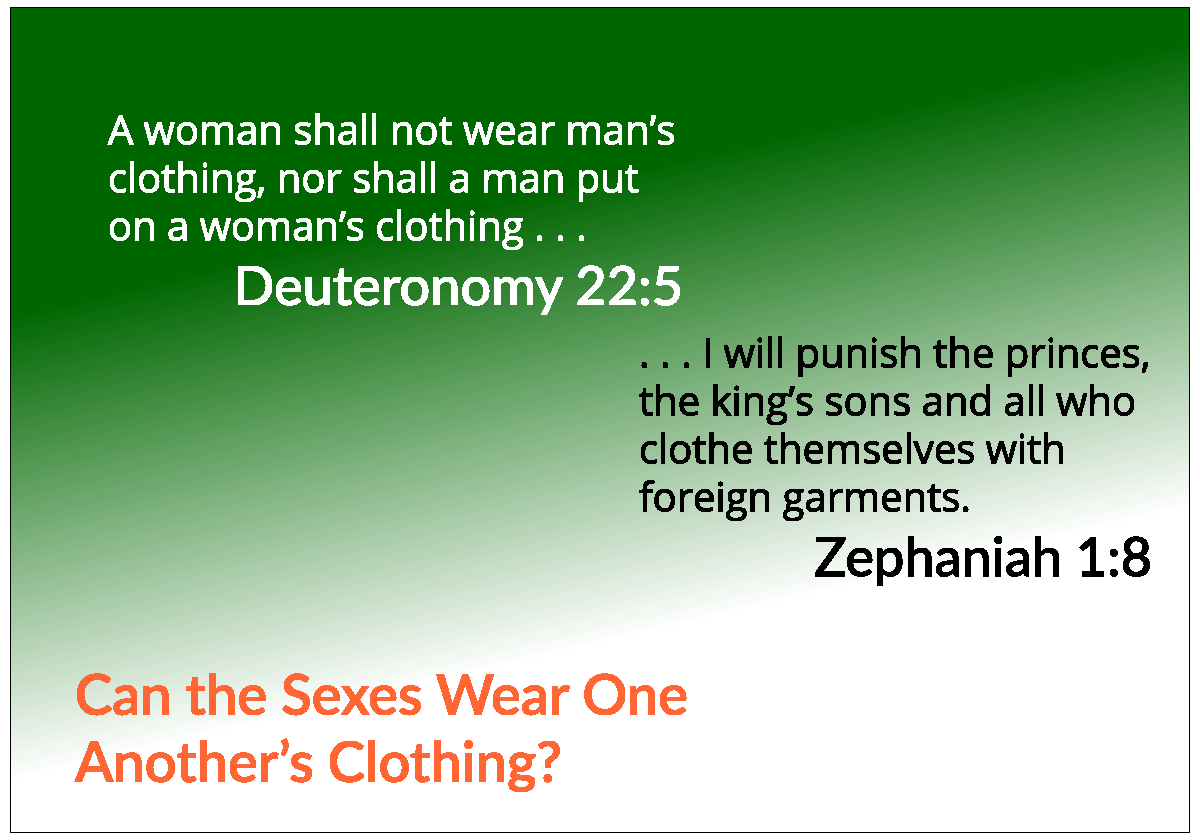 Women Shall Not Wear Men’s Clothing

The first part of the verse prohibits women from wearing men’s clothing and from using a wide variety of items normally associated with men. Unfortunately,  the English translations of the verse are inadequate. Notice that the Hebrew word that is translated as “clothing” in the first part of Deuteronomy 22:5 is כְלִי־ or keli. This Hebrew word means more than just clothing (see Exodus 22:6; Leviticus 11:32; 13:49).[1] Keli includes ornaments, weapons and other symbols that are uniquely characteristic of men.[2, 3] That is, God is prohibiting women from wearing men’s clothing and appearing as men. For example, women cannot wear men’s clothes, wear men’s hairdos or wear men’s watches, medallions or other male artifacts. God is referring to a habitual pattern of life.

Men Shall Not Wear Women’s Clothing

An Abomination To The LORD Your God

The last part of the verse is a warning that “whoever does these things is an abomination to the LORD your God.” This statement helps us understand that this command from the Lord our God seeks to maintain the sanctity of the distinction between the sexes which was established by the creation of man and woman (Genesis 1:27).[4]

Deuteronomy 22:5 prohibits men from dressing like women and women from dressing like men. God warns us to maintain the distinctions of the sexes that He created. This means that men must not wear long hair and women must not wear short hair like a men (Is it wrong for Christians to cut their hair?). Women are to dress like women and men are to dress like men. This does not mean that man cannot wear some article of clothing temporarily, such as wearing a woman’s coat to stay warm or vice versa. This does not mean that it is wrong for a woman to be bald if she loses her hair due to chemotherapy.

5. Ibid. Keil and Delitzch. Note:  Keil and Delitzch state, “The immediate design of this prohibition was not to prevent licentiousness, or to oppose idolatrous practices . . . but to maintain the sanctity of that distinction of the sexes which was established by the creation of man and woman . . .”