Can I be forgiven for taking God’s name in vain?

Can I be forgiven for taking God's name in vain?

There is great confusion about the third commandment which commands us to not take the Lord’s name in vain. Some teach that there are many different ways to violate this commandment and they provide long lists of rules that they believe need to be kept in order to avoid violating the commandment. But the commandment is simple and a long list of rules is not needed because the scriptures do not give us a long list. The scripture simply gives us a principle to follow. That makes it easier for us to keep the commandment. 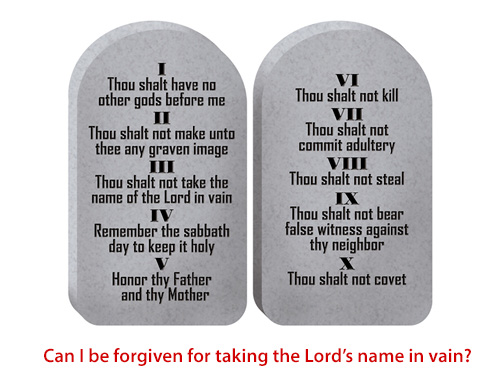 Meaning of the Third Command

You shall not take the name of the LORD your God in vain, for the LORD will not hold him guiltless who takes His name in vain. Exodus 20:7 (NASB)

How To Take God’s Name In Vain

The scriptures give us some examples of how we can take God’s name in vain or we should say rob God of His glory. Leviticus 19:12 is the first example,

And you shall not swear by My name falsely, nor shall you profane the name of your God: I am the LORD. Leviticus 19:12 (NASB)

A second example occurs in Leviticus 24:11–16. In this passage we are told that a son of an Israelite woman “blasphemed the Name and cursed.” The rest of the passage reveals that cursing and blaspheming described the offense. These are not two sins but just one. The curse involved brings dishonor to God. It should be noted that we are not told what the son said.

A third example reveals that we can violate the third command when we question God’s existence or sin.

That I not be full and deny You and say, “Who is the LORD?”
Or that I not be in want and steal,
And profane the name of my God. Proverbs 30:9 (NASB)

In each example we see that a violation of the third commandment occurs when God is dishonored. That is, when God is declared to be “nothing or empty.” Other key passages about swearing in God’s name are Deuteronomy 5:11; Psalm 50:14–16 and Hebrews 6:16-7.

But if the person is a Christian and in anger brought dishonor to God by a word or some sin, then that sin has already been forgiven since the person is already a Christians. Romans 8:1 teaches us that there is no more condemnation for Christians. Yet, that sin needs to be confessed in order to repair the relationship with God. 1 John 1:9 teaches us to repent and 1 John 2:1 reveals that Christ protects us. Therefore, if Christians take the name of the Lord in vain, they are not in danger of going to hell or the lake of fire since all of their sins were forgiven when they became a Christian. Yet, they need to confess the sin in order to restore their relationship with God.

Searching For God
What is the difference between the Ten Commandments and the Law of Moses?
What Old Testament laws can we ignore?
The Shadow Is Replaced
Why do we not keep the Sabbath?
Do we have to keep the ten commandments given in the Old Testament?