Are the incidents in Exodus 17 and Numbers 20 two separate events?

Is the water from the rock story the same incident in Exodus 17 and Numbers 20 or are they two separate incidents?

The two events of Exodus 17:1-7 and Numbers 20:1-13 occurred in two different regions and two different times. Here are the passages.

The book of Exodus records the events leading to the exodus and then one year after the exodus.  For example, in Exodus 12:2 God told Moses that the Hebrew calendar would start with the celebration of the Passover Lamb.

This month shall be the beginning of months for you; it is to be the first month of the year to you. Exodus 12:2  (NASB)

Now it came about in the first month of the second year, on the first day of the month, that the tabernacle was erected. Exodus 40:17 (NASB)

During that one year the Israelites crossed the Red Sea as they fled from the Egyptian army (Exodus 14). Exodus 15 recorded Moses’ song. Exodus 16 reveals that God feeds the Israelites manna in the wilderness. Then after they moved to the Wilderness of Sin, God performed a miracle through Moses and provided them with water from a rock. Many events occurred after that, including Moses receiving the law. Directions were received for building the tabernacle and completing the tabernacle. All of this took one entire year after the Israelites left the land of Egypt. That is the message of Exodus 40:17.

But the events recorded in Numbers start one month later.

Then the LORD spoke to Moses in the wilderness of Sinai, in the tent of meeting, on the first of the second month, in the second year after they had come out of the land of Egypt. Numbers 1:1 (NASB)

The book of Deuteronomy picks up the history in the fortieth year after the exodus.

And it came about in the fortieth year, on the first day of the eleventh month, that Moses spoke to the children of Israel.  Deuteronomy 1:3 (NASB)

So Exodus records the first year after the exodus. Numbers records the years of wanderings and Deuteronomy records the last year. The book of Leviticus gives us the sacrificial laws. 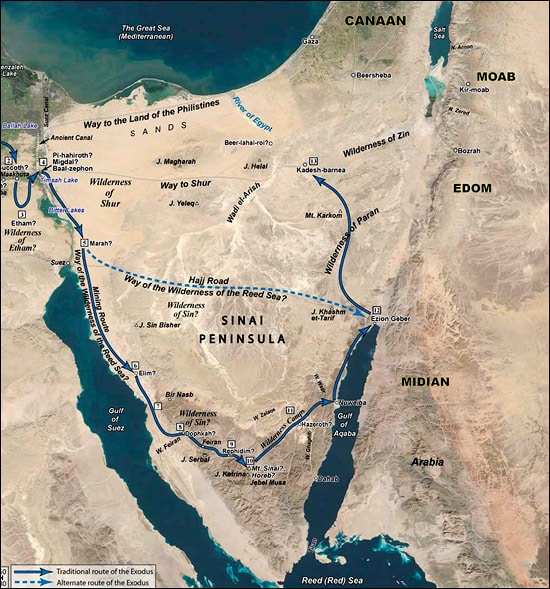 The details of the two events are also different. In the first one, God told Moses to strike the rock. In the second one, God told him to speak to the rock. The rock was a symbol of Christ (1 Corinthians 10:1-4). Figuratively speaking, Jesus had already been struck. The next time God did not want Him struck figuratively again, but to be spoken to. Another interesting fact is that Miriam was alive at the time of the exodus; but just before the second event, Miraim died (Num. 20:1). The first event occurred in the wilderness of Sin and the second occurred in the wilderness of Zin.

But the LORD said to Moses and Aaron, “Because you have not believed Me, to treat Me as holy in the sight of the sons of Israel, therefore you shall not bring this assembly into the land which I have given them.” Numbers 20:12 (NASB)

God’s comment that Moses “did not believe Me” is explained in Deuteronomy.

. . . because you broke faith with Me in the midst of the sons of Israel at the waters of Meribah-kadesh, in the wilderness of Zin . . . Deuteronomy 32:51 (NASB)

The Hebrew word for “broke faith” has the idea of “unfaithful, not loyal, and deceitful.” He was not faithful. In a sense, God was depending on him and he “let God down.” Moses’ sin occurred in his heart before he hit the rock. He was unfaithful.

There are times in our lives when we have been unfaithful. So why did God punish Moses so severely? Because his relationship with God was like no other man’s. He is described as a humble man and a great prophet. God granted him a special relationship and in return expected Moses to be faithful. What a lesson for us! God calls us to be faithful in all that we do. Let’s ask God to make us faithful men and women. A special relationship with God calls for faithfulness. Let’s ask the Holy Spirit to help us be faithful.

How did God help the Isrealites during the escape from Egypt?