How did God help the Israelites during the escape from Egypt?

How did God help the Israelites during the escape from Egypt?

For I will go through the land of Egypt . . . and will strike down all the first-born in the land of Egypt, both man and beast; and against all the gods of Egypt I will execute judgments–I am the LORD. (NASB) Exodus 12:12

Now I know that the LORD is greater than all the gods; indeed, it was proven when they dealt proudly against the people. (NASB) Exodus 18:11

Pharaoh’s reaction to each plague is not surprising. They did not affect him directly – just other people. But finally when the last plague came and after God took his son, Pharaoh gave in and let the Israelites go. He had had enough.

And the angel of God, who had been going before the camp of Israel, moved and went behind them; and the pillar of cloud moved from before them and stood behind them. (NASB) Exodus 14:19

After awhile, Pharaoh changed his mind and in anger went after the Israelites with the Egyptian army to bring them back. When the Israelites saw the Egyptian chariots coming, they became fearful. It is amazing that when trouble comes we forget what God has done for us. So Moses encouraged them saying that God would protect them. Then the angel of God – the pillar of cloud – moved between the Egyptian army and the Israelites. When morning came Moses stretched out his hand over the sea – he did not strike a rock – and the sea separated. 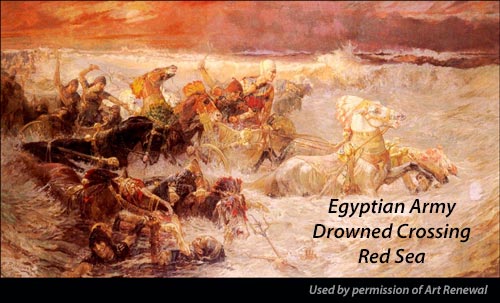 How did God help the Israelites? He performed miracles. He answers our prayers and grants requests that otherwise we would not have. But like the Israelites we often forget His miracles. But that does not change the truth – God is good and we can trust Him!