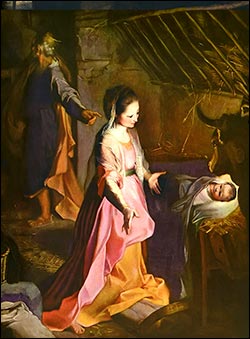 The first Christmas night was dark, lonely, and strange. It was not anything like other nights. There was no Santa Claus, church choirs, bright colored lights, hot apple cider, festive meals, mincemeat pie, or raspberry chocolate candy. The night was not laced with wonderful hopes and expectations about presents under tree, or stories about little elves at the North Pole. The city was simply occupied with travelers, and the citizens of the town. The shops were closed and the day had come to an end. There was no Christmas music in the background or happy faces around the fire. The night was just like any other night with hugs and kisses and expressions of love as little ones went to bed. Yet, the night was lonely and strange for one very young couple.

The couple had just arrived in town and their expectations were high. She was probably nervous and already in pain because she was ready to give birth to a baby. The inn keeper in Bethlehem had done his best to give them a place to stay. He let them stay with the animals. Christmas was not about the mother, the mother’s new husband, nor the manger in which the baby lay. Christmas was not about hopes for the future, or peace in the world. It was only about the baby. Christmas was only about the King who lay in that manager. It was not about the shepherds in the field, or the kings who would come two years later. Christmas was not about the star which would one day move ahead of the kings to lead them to the baby. No! Christmas was about only one thing – a baby – a divine king – a baby named Jesus. The baby was God in human form. He was born of a young virgin, Mary, according to Isaiah 7:14. According to Matthew 1:22-23, she did not have sex with her husband until after Jesus was born. Christmas was about a supernatural event – God becoming a human through a virgin. Both were strange and unusual events. Christmas is about a supernatural being – God in human flesh – the baby Jesus. Today, Christmas is still about that baby – nothing more!

Gift To The World

The prophet Isaiah predicted the following almost 650 years before Jesus was born,

For a child will be born to us, a son will be given to us; And the government will rest on His shoulders; And His name will be called Wonderful Counselor, Mighty God, Eternal Father, Prince of Peace. There will be no end to the increase of His government or of peace, On the throne of David and over his kingdom, To establish it and to uphold it with justice and righteousness From then on and forevermore. Isaiah 9:6-7 (NASB)

Isaiah predicted that a baby would be born as a gift to the world. This is unusual wording for the Old Testament. In other passages babies are “begotten” – not given. That is, babies are the product of husbands and wives coming together, but not this baby. Isaiah tells us that this baby will be “given” and not “made.” He would not be conceived in the normal way. The gospel of Luke records these wonderful words,

The angel said to her, “Do not be afraid, Mary; for you have found favor with God. And behold, you will conceive in your womb and bear a son, and you shall name Him Jesus. He will be great and will be called the Son of the Most High; and the Lord God will give Him the throne of His father David; and He will reign over the house of Jacob forever, and His kingdom will have no end.” Luke 1:30-33 (NASB)

This “Christmas Gift” to the world was our “Mighty God” and our “Eternal Father” (Isaiah 9:6). I was amazed when our first baby was born. My wife and I were excited and amazed all at the same time. There was nothing like that baby. She was so soft and so very small. You could hold her in two hands. If you touched her skin it was softer than cotton. If you stroked her skin, your finger left an imprint. She was beautiful, fun, and so very dependent. Unbelievable! Baby Jesus was just like that with His soft skin. Yet, He was our all-powerful Mighty God.

Before He was born in the human realm, He existed as the Eternal God. This baby which had just been born in water and blood had existed before His mother existed – before she was born. He was the Eternal God. This baby had planned His own birth into this world. He had selected His own parents. The angels who gave the great news to Joseph, Mary, and the shepherds out in the field had been sent by Him. This baby was no ordinary baby. He was the eternal living God. In the New Testament, we are told that He has “life in Himself” (John 5:26). To say that the baby was eternal means that He self-existed before all of us, and He will exist after us. Eternal is eternal. That is why He will be the Prince of Peace forever and ever.

Some thirty-three years later Jesus was an adult and finally revealed Himself as the true “Christmas Gift” by dying on a wooden cross for the sins of the entire world. He planned His own birth. He did not come just to live here, or to have a fun time. No! He came into the world to tell us about God (John 14:9), to teach us the truth, and to heal many as a sign that He was God. The Apostle John says,

. . . many other signs Jesus also performed in the presence of the disciples, which are not written in this book; but these have been written so that you may believe that Jesus is the Christ, the Son of God; and that believing you may have life in His name. John 20:30-31 (NASB)

For by grace you have been saved through faith; and that not of yourselves, it is the gift of God; not as a result of works, so that no one may boast. Ephesians 2:8-9 (NASB)

The gift of forgiveness is given when we believe that Jesus is God and want Him to forgive our sins. We want to encourage you to click on the words at the link called “Do You Believe?” It is the ultimate Christmas story and explains what it means to believe in Jesus. He offers peace (John 14:27), joy (John 15:11), and eternal life (John 10:28).  The first “Christmas Gift” was an expression of God’s great, awesome, incredible, and wonderful love.

For God so loved the world, that He gave His only begotten Son, that whoever believes in Him shall not perish, but have eternal life.  John 3:16 (NASB)

The first “Christmas Gift” is God saying, “I was born into your world to die for you!”