From the beginning of the Sermon of the Mount, Jesus has been telling us what a true Christian is like. He has described the inward attitude of a true Christian. He corrected the false teachings of the Jewish leaders who had changed the meaning of scripture to accommodate their self-centeredness. God was not really the authority of their lives. Does this sound like some today? He showed them that they really did not love their neighbor. Now Jesus is going to show them they really do not love God.

Beware of practicing your righteousness before men to be noticed by them; otherwise you have no reward with your Father who is in heaven. . . . Matthew 6:1-4 (NASB)

Looking In The Mirror

It is amazing how often we find ourselves talking with a person who appears to want us to know he/she is either a child of missionaries, a missionary, a son or daughter of a pastor, a deacon or elder of the church, the adult Sunday School teacher or participating in a ministry at the jail. But they are not alone. All of us want others to think well of us. Sometimes the church is just like the work place. There are those who want to run the church and want others to know it. It is not uncommon for Christians to hint that they are doing something spiritual. There are some who want to look good by avoiding failure. They are afraid to be involved for fear of making a mistake and “looking bad.”

Earlier in the Sermon on the Mount, Jesus encouraged us to let others see our life – our righteousness,

Let your light shine before men in such a way that they may see your good works, and glorify your Father who is in heaven. Matthew 5:16 (NASB)

Some teachers have forgotten that the real teacher is the Holy Spirit,

. . . not in words taught by human wisdom, but in those taught by the Spirit, combining spiritual thoughts with spiritual words. 1 Corinthians 2:13 (NASB)

The teacher must yield himself to the Holy Spirit for anyone to learn; and if anyone does learn, it is not the teacher who did a “great job” – it is the Holy Spirit. The same is true for anyone else who serves in the church. It is God who is bringing the fruit in His ministry. It is easy to forget that . . . If we look in the mirror, we do not see God. When is the last time you were upset that someone in the church did not recognize the work that God was doing through you?

All of us at sometime have been like the Jewish leaders. These leaders displayed their “righteousness.” They wanted everyone to know how spiritual they were. So Jesus warns His audience not to “practice their righteousness” before men so that they could receive praise. The Greek word Jesus uses is the present active imperative of prosecho. It means to “be continually guarding against.” It has the idea of continually watching yourself. Jesus also uses a fascinating Greek word when He says “to be noticed.” The word is theaomai. It means “to be viewed by onlookers.” They were showing their “righteousness” to the crowd. Jesus paints a picture where the religious leaders are like professional sports players and the people are spectators watching them play the game of “righteousness.”

These Jewish leaders were displaying their righteousness “in front” of others in order to be seen. In order to be recognized as saints – as a godly men. 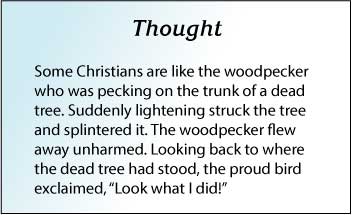 Jesus gives us several examples of their “godly” behavior. His first one is about the giving of alms.

When therefore you give alms, do not sound a trumpet before you, as the hypocrites do in the synagogues and in the streets, that they may be honored by men. Truly I say to you, they have their reward in full. But when you give alms, do not let your left hand know what your right hand is doing that your alms may be in secret; and your Father who sees in secret will repay you. Matthew 6:2-4 (NASB)

Alms involved the giving of money to the poor and needy. There were three types of alms. The first type was money given to the “public dish” or to beggars. These alms were collected daily and distributed. Apparently, they were collected in the streets door-to-door. The second type of alms was the “Public Poor Box” which was given to the poor of the city. They were collected in the synagogue on the Sabbath and distributed the next Sabbath eve. The third alms were the unharvested corners of the grain fields, the sheaves left in the fields, the remaining gleanings and the poor’s tenth.

The religious leaders believed that giving alms gained a person righteousness. One Jewish leader said, “This money goes for alms . . . that I may obtain the world to come.” The Hebrew word corresponding to the Greek word for alms means “righteousness.” In fact, the leaders had translated Psalm 17:15 as follows:

As for me, I shall behold Thy face because of alms.

The correct translation is,

As for me, I shall behold Thy face in righteousness. Psalm 17:15 (NASB)

The religious leaders believed their good deeds of alms gave them righteousness. What a tragedy! They were seeking heaven with God and seeking glory with men at the same time. Jesus says, “Don’t be like them!” They wanted to be noticed by men when did their righteousness. They would have a trumpet sound when they gave alms so that others would know they were practicing “righteousness.”

How are you doing, beloved? Does your left hand know? Or, is your right hand eagerly displaying your good deeds? Does everyone know you are the president of the Women’s Ministry or the deacon who does everything?

God wants your pursuit of righteousness to be a heart that hungers to be like Him. Then out of the overflow of your pursuit to be like Him, others will catch a glimpse of Jesus in you. Jesus wants us to be careful that our praise gives God the glory for the work He does in our life. Then, “your Father who sees in secret will repay you . . .”

Sermon on the Mount