Who created sin? How did sin enter the world?

Who created sin? How did it enter the world?

The fact that God exists is obvious in the world around us, in the mysteries of our human bodies, the existence of 1.6 million galaxies surrounding us, and in the moral law written in our minds. That is the message of Romans 1-2. But many ignore the fact that God exists. As a result, the world ignores the fact that there is a divine moral standard. One must ignore God before one can feel comfortable ignoring His divine moral law. God is holy and we are not. We sin! 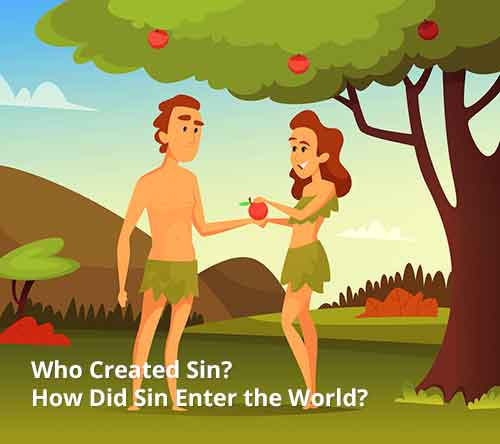 Adam Brought Sin Into The World

Before talking about sin, we need to define sin. 1 John 3:4 states that “sin is lawlessness.” Sin is any violation of God’s laws or ordinances. Romans 1:28-32 and Galatians 5:19-21 give us lists of sins. However, the lists are not all inclusive. The first sin on earth occurred when Adam disobeyed God’s command in Genesis 3. The command that Adam disobeyed was given in Genesis 2:16-17.

And the Lord God commanded the man, saying, “You may surely eat of every tree of the garden, but of the tree of the knowledge of good and evil you shall not eat, for in the day that you eat  of it you  shall surely die.” Genesis 2:16-17 (NASB)

Therefore, just as through one man sin entered into the world, and  death through sin, and  so death spread to all men, because all sinned. Romans 5:12 (NASB)

Who brought sin into our world? The answer is Adam. The Greek word for the phrase “came” in Romans 5:12 is eiserchomi. The word means “go into” or “to come into” with the focus on the initial act. That is, when Adam disobeyed, sin entered or came into the world. It did not exist in the world until he disobeyed. His single act of disobedience was an act of sin; at that moment sin was a reality in a previously sinless world (Romans 8:20-22). Sin did not exist on earth before Adam’s teeth sunk into the fruit of the tree. How did sin enter our earth? The answer is that sin became a reality in the world when Adam disobeyed God. In that sense, Adam was the originator of sin.

James 1:14-15 says that sin is the result of our actions. We cause sin to occur.

But each one is tempted when he is carried away and enticed by his own lust. Then  hen lust has conceived, it gives birth to sin; and when sin is accomplished, it brings forth death.  James 1:14-15 (NASB)

God Did Not Create Sin

Sin is something we all commit in the sense that sin is an act of either willful or unintentional disobedience. We do this every day when we choose to disobey God’s absolute moral standard. God did not create sin. God tells us  in the Bible that He cannot sin nor can He be tempted with sin. Listen to the book of James.

Let no one say when he is tempted, “I am being tempted by God”; for God cannot be tempted by evil, and He Himself does not tempt anyone. But each one is tempted when he is carried away and enticed by his own lust. Then when lust has conceived, it gives birth to sin; and when sin is accomplished, it brings forth death.” James 1:13-15 (NASB)

God cannot be tempted and He does not cause others to sin. Since He does not create sin, then how did sin come into existence? It occurred with the first act of Adam’s disobedience. It is like the little boy who knew that pulling a girl’s hair would hurt. He did it because he wanted to. That is a good description of sin. We know that God does not want us to disobey, but we sin anyway. We repeat multiple sins (Romans 5:20). Sin increases because we sin!

The first sin occurred when Satan chose to sin. He was created as a holy being, and so were Adam and Eve. Satan committed sin in the spiritual realm and Adam created or committed the first sin in this universe. It is amazing to realize that these holy beings decided to sin. Just because a being is holy does not mean it cannot sin. God permitted the angels and humans to sin. That was the situation before sin occurred. Once humans sinned, we became slaves of sin (John 8:34; Romans 6:17-18) and no longer had the ability to choose to do good.  God did not prevent them. He allowed it. God wants a relationship with us, but He wants us to desire it. He will not force us. Sin is a choice. It is a decision. Satan knew this fact very well. That is why he tried to cause Jesus to sin in the wilderness.

Then Jesus was led up by the Spirit into the wilderness to be tempted by the devil. And after He had fasted forty days and forty nights, He then became hungry. And the tempter came and said to Him, “If You are the Son of God, command that these stones become bread.” Matthew 4:1-3 (NASB)

Satan tried to cause Jesus to sin. He knew that a holy being could sin, but He did not realize that Jesus could not sin. Jesus did not sin (Hebrews 4:15). God cannot change. He has always been holy and He will always be holy (Hebrews 13:8).

Sin still exists in heaven today. Satan was permitted to enter heaven and visit God (Job 1-2). But some day God and the angels of heaven will deny him access and cast him to the earth. Some day he will live forever in the Lake of Fire. In the new heaven and new earth there will be no sin (Revelation 21:27; 22:3). Satan will not be there.

Why would holy beings commit sin? We do not know except that they wanted to disobey God. I am glad that God does not change. I am glad that God is love, holy, just, righteous, all-powerful, and all-knowing. Just imagine what life and eternity would be like if God changed and sinned, or if God turned hateful or became weak and Satan was stronger. But God cannot change because He is infinite and self-existing. He is what He is. We can praise our unchangeable God and thank Him. Thank you, God, for loving us and forgiving us when we trust Jesus to forgive us. Please read “Searching For God” if you want to know more about how you can have your sins forgiven.

Are we born spiritually dead?
What is the unforgivable sin?
Sin and Salvation