What was Jesus’ physical appearance?

What was Jesus' physical appearance?

The Bible never describes Jesus’ physical appearance while He walked on this planet. Some individuals believe that Exodus 24:10; Daniel 7:9; 10:5-6 or Revelation 1:14-15; 4:2-3 describe Jesus’ physical, earthly appearance. However, a careful and close examination of these passages reveals that Exodus 24:10; Daniel 7:9 and Revelation 4:2-3 describe the appearance of God the Father in heaven. Daniel 10:5-6 and Revelation 1:14-15 describe a vision of Christ in heaven, but not His physical appearance on earth when He had taken on the human form of a male body. 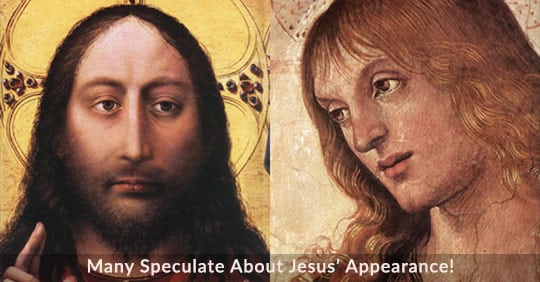 Jesus Was Not Handsome

The only passage in the Bible that refers to Jesus’ physical appearance while He was on this planet is Isaiah 53:2.

For He grew up before Him like a tender shoot,
And like a root out of parched ground;
He has no stately form or majesty
That we should look upon Him,
Nor appearance that we should be attracted to Him.
Isaiah 53:2 (NASB)

The passage tells us that Jesus “had no stately form or majesty” and no “appearance that we should be attracted to Him.” In short, Jesus was not a handsome man.

Jesus Was a Male

This reveals that Jesus spoke a language. He was visible to the naked eye and He was not  just a spirit, but He had a physical body.

Many speculate that Jesus’ skin color was olive colored, white, black or brown, but the Bible never describes Jesus’ skin color while He had the form of a human man living on earth. Jesus was born to a Jewish mother. The skin color of Jews today varies in shades of white to olive.  The Bible does not record His height, weight, hair color, eye color or physical build.   In short, we do not know what Jesus looked like while living as a man on earth since the Bible does not tell us, and there are no historical records that describe His physical appearance.

Many speculate about the appearance of Jesus Christ, but the Bible never gives us a description of Him. However, Christians will see Him one day and finally understand what He looks like.

Beloved, now we are children of God, and  it has not appeared as yet what we will be. We know that when He appears, we will be like Him, because we will see Him just as He is. And everyone who has this hope fixed on Him purifies himself, just as He is pure. 1 John 3:2-3 (NASB)

Some day we will see Him as He appears. We can rejoice that we do not know what He looked like when He walked among us because His appearance when He walked on earth is not important. God tells us that He does not look at the outward appearance but at the heart. What is your heart like? Are you confused with anger and a preoccupation with the external or with the spiritual condition of your heart? Let’s forget about the external appearance of Christ. What is important about Jesus is that He is our God, our Savior from sin, and His resurrection proves He is our God (Romans 1:4).

Jesus Our God
Who Is Jesus?
Is there proof that Jesus married a black woman?
Are there any biblical references to Jesus' skin color?