What did God mean by “He is tired of carrying them” in Isaiah 1:14?

What does God mean by carrying them?

The question we are concerned with is, “What does God mean by the phrase “carrying them” in Isaiah 1:14?”

I hate your New Moon Festivals
and all others as well.
They are a heavy burden
I am tired of carrying. Isaiah 1:14 (CEV)

In order to determine the meaning we must examine the context of the passage and the specific word “carrying.” 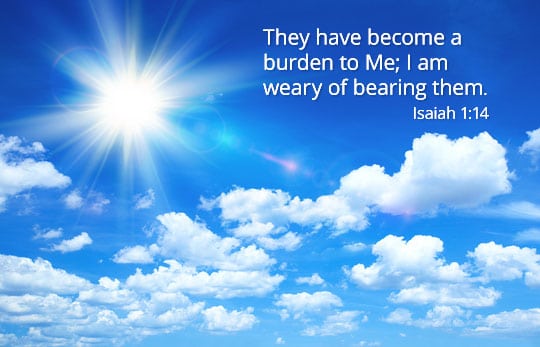 Beginning in Isaiah 1:2, the prophet Isaiah shares the vision that was given to him by God. The vision was directed to everyone of God’s creatures in the heavens and on the earth. In the vision God tells Judah that they had revolted against Him. In verse 3, He said that an oxen knows its owner and a donkey know its master, but Israel did not know their owner or master!

An ox knows its owner,
And a donkey its master’s manger,
But Israel does not know,
My people do not understand. Isaiah 1:3 (NASB)

Then God declared that the nation was sinful and weighed down with sins. God continued to describe their sinful condition. In verses 9-10 God said that they were as sinful Sodom and Gomorrah. Yet verse 11 reveals they went through the ritual of worshipping God. They acted as if they were spiritual men and women, but in truth they were wicked.

In verses 11-13 God declared that He did not care for their many sacrifices, burnt offerings and worship in the courts of His temple. Then in verse 13 He said,

Bring your worthless offerings no longer,
Incense is an abomination to Me.
New moon and sabbath, the calling of assemblies —
I cannot endure iniquity and the solemn assembly. Isaiah 1:13 (NASB)

Then God said, “I hate your new moon festivals and your feasts.” He hated their ritual. Their sacrifices and feasts were meaningless. Today some Christians have twisted the meaning of Scripture to accommodate their own personal pleasure. Some Bible studies have become more about a time of “fellowship” than about serious Bible study and a desire to please God. Evangelism has become optional and turned into friendship time where we can go to breakfast or lunch. Often the gospel is never presented because Christians become more interested in keeping the relationship. Some professing Christians attend church when it is convenient, and stay home to watch the Super Bowl. Some church attenders are just like those in Sodom and Gomorrah. Sex is their god and they enjoy watching porn! In fact, it is estimated that almost sixty-six percent of men and thirty-three percent of women who attend church watch pornography. Many are like the people of Judah. They are “weighed down with iniquity” (verse 4).

Therefore, God said, “They are a heavy burden.” The Hebrew word for “burden” is torah. This Hebrew word has the idea of a very heavy or stressful burden. That is, God had been patiently waiting for them to repent and stop sinning. Romans 2:4-6 reminds us that God is patient and waits for us to stop our sinning before disciplining us.

Or do you think lightly of the riches of His kindness and tolerance and patience, not knowing that the kindness of God leads you to repentance? But because of your stubbornness and unrepentant heart you are storing up wrath for yourself in the day of wrath and revelation of the righteous judgment of God, who WILL RENDER TO EACH PERSON ACCORDING TO HIS DEEDS . . . Romans 2:4-6 (NASB)

At the end of verse 14, God finally declares, “I am tired of carrying” (CEV). The NASB is somewhat clearer with, “I am weary of bearing them.”

I hate your new moon festivals and your appointed feasts,
They have become a burden to Me;
I am weary of bearing them. Isaiah 1:14 (NASB)

The Hebrew word for “bearing” is nasa. The word literally refers to “carrying a heavy burden.” That is, God was tired of patiently waiting for them to repent. They were a burden to Him because of their unrepentant sin. Therefore, He was weary of “bearing” them or as in the English language we would say of “putting up with them.” Then in verses 15-20 God calls them to repent.

Our world is either in the same condition or it is moving in the same direction as Judah moved. Jesus warned His apostles that in the last days before His second coming, the world would be like the people in the days of Noah and in the days of Sodom and Gomorrah.

While there is nothing wrong with drinking, marrying, selling, planting or building, Jesus’ point is that the people will be given to doing these things! Those things would become more important than Him. Who is more important to you?

Unless You Repent You will Perish