Should women cover their heads when praying or preaching? 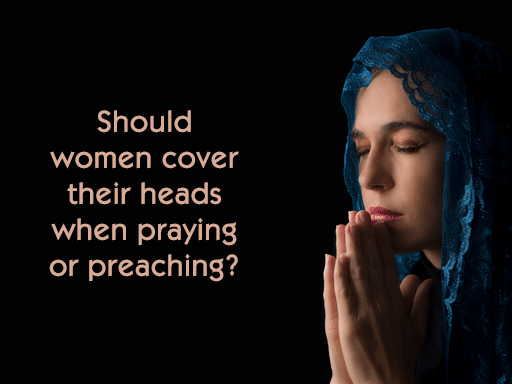 Meaning of the Words “Head” and “Uncovered”

1 Corinthians 11:4-6 appears to some to teach that women should wear a scarf or something else on their heads. However, the question is where?

Every man who has something on his head while praying or prophesying disgraces his head. But every woman who has her head uncovered while praying or prophesying disgraces her head, for she is one and the same as the woman whose head is shaved. For if a woman does not cover her head, let her also have her hair cut off; but if it is disgraceful for a woman to have her hair cut off or her head shaved, let her cover her head. 1 Corinthians 11:4-6 (NASB)

The key to understanding 1 Corinthians 11:4-6 is the phrase “her head” and the word “uncovered.” Some teach that the phrase “her head” refers to the woman’s husband. That is, if she has a husband, he is the head of his wife or her authority. But that is not the English equivalent of the Greek word used here. The Greek word for “head” is kephale. It is the normal Greek word for the anatomical head that is supported by a person’s neck. Five times the word is used to refer to the chief cornerstone and only one time does it refer to someone’s hair. Otherwise, the word is used 69 times to refer to the anatomical “head” or “heads” in the New Testament. That is, “her head” does not refer to her husband but to her own physical head. Paul is discussing a woman covering her physical head.

The Greek word in verse 5 for the English word “uncovered” is the Greek word akatakyptos. It just means “not covered.” The Holy Spirit is saying that if a woman’s head is uncovered, she dishonors herself. Now is Paul referring to a cloth covering on her head or some other type of head covering? There are several views as to why a woman is dishonored.

Did the Apostle Paul Refer To a Cultural Situation?

One view says that since 1 Corinthians was written in A.D. 55, the Holy Spirit is referring to a common practice in the Corinthian culture where prostitutes had uncovered heads.[1] So it was a scandalous offense to have an uncovered head.[2] Yet, Conzelmann reports,

The ancient material leads to no certain answer. The Jewish custom, to be sure, can be unequivocally ascertained, and corresponds to Paul’s regulation: a Jewess may appear in public only with her head covered. On the other hand, the Greek practice in regard to headgear and hairstyle cannot be unequivocally stated for the simple reason that the fashion varies.[3]

Recent research is in agreement with his conclusion. That is, there is no clear ancient custom or practice of women that will help us. Therefore, the reason a woman is disgraced when her head is uncovered must be determined from Paul’s teaching in this passage and not from an ancient cultural practice.

What Is The Woman’s Real Head Covering?

It is clear from 1 Corinthians 11:5 that Paul is concerned about women whose heads are bald or shaved since he says, “but if it is disgraceful for a woman to have her hair cut off or her head shaved.” It is also important to notice that in verse 6 the Greek word that is translated as “cut off” is keiro which means “to shear or cut off.” In Acts 8:32 the Greek word is used of a “shearer” of a lamb. A shearer completely removes all of the lamb’s “hair.” Also, in verse 6 the Greek word for”shaved” is xurao. The word comes from xuron which means a “razor.” In ancient times a razor was used to trim beards. By comparing keiro with xyrao we discover that Paul is referring to a woman’s hair that is either completely cut off, as one shears sheep or hair that has been shortened by a razor.

Her long hair is her glory. Therefore, Paul’s reference to uncovered heads must refer to hair that is very short. This is supported by the Greek word for “long hair” in verse 15 which is komao. This word refers to hair that is long as opposed to short. This means that Paul is encouraging the Greek women to show submission by wearing their hair long and her long hair is her covering.[4, 5, 6] She does not need to wear a cloth veil. This means a woman should not have her hair cut short as men typically wear their hair.

Paul’s discussion continues until verse 16. In this last verse he makes an important statement that this is a universal and divine principle that all of the churches are to follow.

But if one is inclined to be contentious, we have no other practice, nor have the churches of God. 1 Corinthians 11:16 (NASB)

If anyone wants to be contentious, they are arguing against this common practice among the churches. The fact that Paul is not addressing a cultural situation in Corinth is evident when he says, “we have no such practice, nor have the churches of God.”[7] All of the other churches are following this custom or habit.

Therefore, women should wear long hair while praying or prophesying. But Paul never tells us if he is referring to praying or prophesying in the church or outside the church.  We should notice that both 1 Corinthians 14:34 and 1 Timothy 2:12, teach that women are not to teach in the church or oversee men. If we combine these instructions, we conclude that women are not to teach in the church when it meets for corporate worship but they may pray. Since the gift of prophecy is not the gift of teaching, we conclude that  women cannot speak forth for the Lord in the church (1 Timothy 2:12; 3:2). A woman’s teaching or prophesying should be with women and children.   It should be noted that prophesying is no longer speaking new revelation as God’s revelation of Himself to man has been completed and the canon is closed.

7.  The word for “practice [NASB]” is the Greek word συνηθεια or “habit or custom.” Arndt, W. F. A Greek-English Lexicon, University of Chicago Press, 1973.

Role of Women In The Church
Rise of Women Pastors
What does the Bible say about women teaching men?