Is it wrong to own a Masonic Lodge Bible? It is an embossed KJV Bible.

My King James Bible is embossed with the Masonic emblem and filled with free mason symbolisms. Is it wrong to own a Masonic Lodge Bible?

If you own a King James Bible that is embossed with the Masonic emblem and it contains free mason symbolisms, you are free to own it and keep it in your home, unless it troubles your conscience. The following will explain the reasons why. 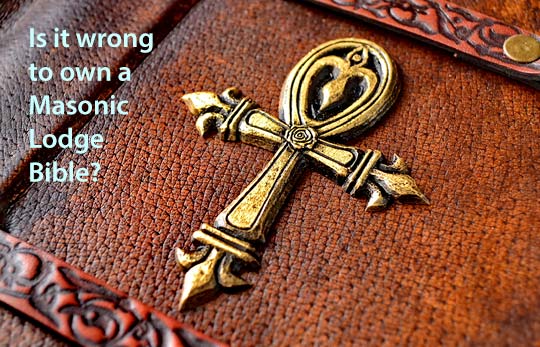 Whatever You Do, Do for the Glory of God

Freemasonry is a cult and its core teachings are not Christian. All false religions and false teachings are demonic in origin (1 Timothy 4:1). The guiding principle for situations where the demonic is involved is given to us in 1 Corinthians 10:31.

In whatever we do, we are to give glory to God through our actions. This verse is the conclusion to 1 Corinthians 10 which is concerned with eating or drinking anything that was sacrificed to idols (1 Corinthians 10:19-21, 25-28).

There are No Other Gods, but Demons are Real

Starting in verse 14 of this chapter, the apostle Paul warns Christians to flee idolatry. Paul establishes this important principle before proceeding with his discussion in verses 14-31. Beginning in verse 19-20 the apostle tells us that anything that is sacrificed to an idol is nothing. It is not a god.

No, but I say that the things which the Gentiles sacrifice, they sacrifice to demons and not to God . . . 1 Corinthians 10:20 (NASB)

All Things, Except Sin, are Lawful for Christians

In verses 23-28 the apostle tells us that Christians are free to drink or eat anything that is sacrificed to idols. Verse 23 is the principle and verses 24-29 give us the example.

All things are lawful, but not all things edify. Let no one seek his own good, but that of his neighbor. Eat anything that is sold in the meat market without asking questions for conscience’s sake; FOR THE EARTH IS THE LORD’S, AND ALL IT CONTAINS. If one of the unbelievers invites you and you want to go, eat anything that is set before you without asking questions for conscience’ sake. But if anyone says to you, “This is meat sacrificed to idols,” do not eat it, for the sake of the one who informed you, and for conscience’ sake; I mean not your own conscience, but the other man’s . . .  1 Corinthians 10:23-29  (NASB)

Since God has given us the principle that all things are lawful for Christians unless it involves sin, it is okay to own an embossed Masonic Lodge Bible. Yes, the Masonic Lodge Bible contains false teaching, the doctrines of demons. But you are free to own one as long as you ignore any footnotes and teachings in the margin of the Bible.

Finally, if your conscience troubles you because you own the Masonic Lodge Bible, then you need to throw it away. In Romans 14:23 the apostle Paul said, “But he who doubts is condemned if he eats, because his eating is not from faith; and whatever is not from faith is sin.” He refers to our freedom to eat whatever we desire as long as our conscience is not troubled. While owning a Bible is not eating, the same principle applies for he says, “. . . he who doubts is condemned . . .” Therefore, if owning the Bible disturbed your conscience, then do not keep it.