How many Arks of the Covenant were made? — Is there one in heaven too?

The Ark of the Covenant is first mentioned in the book of Exodus. Its description and construction is first described in Exodus 25:8-16 and then again in Exodus 37:1-9 when Bezalel was commissioned to make the ark. Our question is, “How many Arks of the Covenant were made?” Was there an ark made of wood and then a second one made of gold? 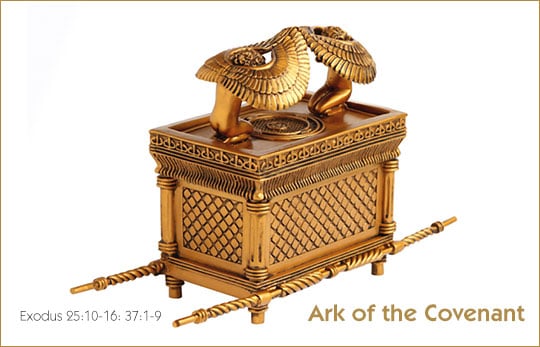 Design Given For The Ark of the Covenant

The design for the Ark of the Covenant was first given to Moses while he was on Mount Sinai. In fact, Exodus 25:8-9, 40 states that God showed Moses a pattern for the tabernacle and all of the furniture in the tabernacle.

And let them make me a sanctuary, that I may dwell in their midst. Exactly as I show you concerning the pattern of the tabernacle, and of all its furniture, so you shall make it . . . And see that you make them after the pattern for them, which is being shown you on the mountain. Exodus 25:8-9, 40 (ESV)

But what did Moses see? Where did this pattern exist? Hebrews 8:5 answers that question by telling us that the tabernacle Moses was told to build is like something that exists in heaven.

They serve a copy and shadow of the heavenly things. For when Moses was about to erect the tent, he was instructed by God, saying, “See that you make everything according to the pattern that was shown you on the mountain.” Hebrews 8:5 (ESV)

Hebrews 9:23 further tells us that the tabernacle is a copy of something in heaven.

Our fathers had the tabernacle of testimony in the wilderness, just as He who spoke to Moses directed him to make it according to the pattern which he had seen. Acts 7:44 (ESV)

These verses teach that Exodus 25:8-16, 40 refers to the instructions that God gave Moses for building the Ark of the Covenant. Exodus 25:10-16 does not describe the actual building of the Ark.

Bezalel To Build The Ark of the Covenant

Exodus 37:1-9 describes the actual building of the Ark of the Covenant. We are told that a man named Bezalel made the ark. The pattern that he followed matches exactly the one given to Moses in Exodus 25:10-22. In that passage we are told that God directed Moses to build the Ark of the Covenant from acacia wood (Exodus 25:10) and then overlay it with gold and add gold molding (Exodus 25:11). It was to have four gold rings and attach them to the four feet. The two poles were to be overlaid with gold. The contents of the ark are described in Exodus 25:17-22.

Now this is important since Exodus 25:22 says that God promised to meet them at the Mercy Seat between the two cherubim.

There I will meet with you; and from above the mercy seat, from between the two cherubim which are upon the ark of the testimony, I will speak to you about all that I will give you in commandment for the sons of Israel. Exodus 25:22 (NASB)

There God would speak to them. Dr. J. Vernon McGee writes this about the Mercy Seat,

The word translated as “propitiation” is in the Greek the same word for the mercy seat. Christ is the mercy-seat today for the world. This phase of His work is enlarged upon in Hebrews 9:24-28, where Christ is seen as the sacrifice which taketh away the sins of the world.[1]

Today, Jesus has replaced the Mercy Seat and, consequently, the Ark of the Covenant. Jesus is God and no other! Is He your God and Savior?

Why did the man who touched the Ark of God die?
What do the other parts of the Tabernacle represent?
Smoke of His Glory
Picture of Jesus (Hebrews 9:6-10)