Did Moses write the terms of the covenant while God wrote the Ten Commandments?

In reference to Exodus 34-37, did Moses write the terms of the covenant (at God's request) while God wrote the laws (10 Commandments)? Are the covenant and the Ten Commandments two different things?

Then Moses turned and went down from the mountain with the two tablets of the testimony in his hand, tablets which were written on both sides; they were written on one side and the other. And the tablets were God’s work, and the writing was God’s writing engraved on the tablets. (NASB) Exodus 32:15-16

The passage in Exodus 32 goes on to tell us that Moses threw the Ten Commandments to the ground when he saw the sin of the Israelites. The tablets broke. 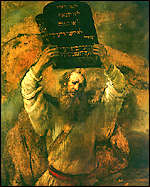 So Moses went back up Mount Sinai to receive another copy. Exodus 34:27 describes Moses’ return to get the second copy of the Ten Commandments. Here we are told that God told Moses to carve out the tablets and write the words.

Then the LORD said to Moses, “Write down these words, for in accordance with these words I have made a covenant with you and with Israel.” So he was there with the LORD forty days and forty nights; he did not eat bread or drink water. And he wrote on the tablets the words of the covenant, the Ten Commandments. (NASB) Exodus 34:27-28

Now the LORD said to Moses, “Cut out for yourself two stone tablets like the former ones, and I will write on the tablets the words that were on the former tablets which you shattered. (NASB) Exodus 34:1

The covenant was also written by Moses and God, but the covenant included more than just the Ten Commandments. It included all of the details about animal sacrifices, the tabernacle, the priesthood, and the many regulations.

This is called the Old Covenant or the first covenant. It is also called The Law.

When Jesus came and died for the sins of every man and woman in the world, He replaced The Law or the Old Covenant with a New Covenant. All of the ceremonial laws have been deleted. The Old Covenant no longer applies today. But the moral aspects of the law remain. The purpose of the Law is to help us see that we sin and to show us that we need Jesus Christ’s forgiveness. Today, God calls us to be holy. This is not something we can achieve on our own. It is only possible when Jesus Christ forgives our sins. This happens when we believe in Jesus Christ. To learn more, visit Searching for God.