Did Jonathan shoot one or three arrows to give a signal to David?

Did Jonathan shoot one or three arrows to give a signal to David?

I Samuel 20 contains a very interesting mystery. In 1 Samuel 20:19-22 we are told that Jonathan had planned to shoot arrows. But 1 Samuel 20:35-38 states that Jonathan shot only one arrow. What follows is an explanation as to what happened. So, did Jonathan shoot one or three arrows to give a signal to David? 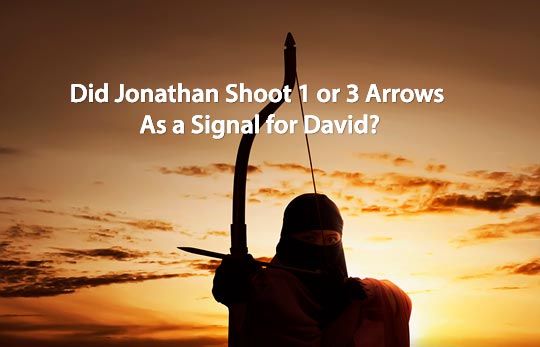 1 Samuel 20 captures a lengthy discussion that occurred between Jonathan and David. In verse 9, Jonathan promised David that if he learned “that evil has been decided by my father,” he would tell David. Then an agreement was made as to how Jonathan would communicate what he learned. That agreement is described in 1 Samuel 20:19-22.

Then Jonathan said to him, “Tomorrow is the new moon, and you will be missed because your seat will be empty. When you have stayed for three days, you shall go down quickly and come to the place where you hid yourself on that eventful day, and you shall remain by the stone Ezel. I will shoot three arrows to the side, as though I shot at a target. And behold, I will send the lad, saying, ‘Go, find the arrows.’ If I specifically say to the lad, ‘Behold, the arrows are on this side of you, get them,’ then come; for there is safety for you and no harm, as the LORD lives. But if I say to the youth, ‘Behold, the arrows are beyond you,’ go, for the LORD has sent you away. As for the agreement of which you and I have spoken, behold, the LORD is between you and me forever.” 1 Samuel 20:19-22 (NASB)

Did Jonathan Shoot One or Three Arrows?

Now it came about in the morning that Jonathan went out into the field for the appointment with David, and a little lad was with him. He said to his lad, “Run, find now the arrows which I am about to shoot.” As the lad was running, he shot an arrow past him. When the lad reached the place of the arrow which Jonathan had shot, Jonathan called after the lad and said, “Is not the arrow beyond you?” And Jonathan called after the lad, “Hurry, be quick, do not stay!” And Jonathan’s lad picked up the arrow and came to his master. 1 Samuel 20:35-38 (NASB)

Here we are told that Jonathan shot only one arrow and then told his lad, “Is not the arrow beyond you?” That was the signal to David that he was in danger. Saul wanted to kill him.

This creates a question. Did Jonathan shoot one or three arrows to give a signal to David? There are several issues raised by this question. First, Jonathan may have changed his plan if the first arrow shot landed accurately. What happened does not mean that the Bible contains an error. It may be that Jonathan felt threatened since his father, Saul, tried to kill him (1 Samuel 20:30-33). So, he may have changed his plan or felt rushed to send the signal.

Second, it is very important to notice that verse 36 says Johnathan had brought three arrows to the field. He may have shot all three, but only what happened when the last one was shot is recorded. The first two may have landed off to the side to appear as normal target shooting, but the last one would have looked like a mistake in his accuracy. It may be that Scripture only recorded the important shot that was the agreed upon signal.

Third, there are some variations in the Hebrew manuscripts that say the lad picked up the “arrows” in verse 38. If so, that would mean Jonathan did not change his mind.

So, what is the correct view? The answer is not certain. It would appear that the first view is the most reasonable answer since Jonathan himself was in danger just before he was to shoot the arrows.

It is important to remember that God the Holy Spirit wrote all of Scripture (2 Peter 1:20-21).  Every book of the Bible has two authors: the human author, and the Holy Spirit. Numbers 23:19 says that God does not lie,

Therefore, seeming inconsistencies such as this one are not a negative reflection on God or the accuracy of the Bible. Every supposed contradiction on Scripture has been demonstrated to have a logical solution. We praise God that He is truthful and so is the book that He wrote.  Colossians 1:5 calls the Bible the Word of Truth.

Difficult Bible Passages
Does the Bible contain errors, discrepancies, contradictions or mistakes?
David and Jonathan — Same sex relationship in the Bible?
Ecclesiastes 12:7 — What is the meaning of the spirit returns to God?
Did Jesus quote the book of Enoch in Matthew 22:29-30?
What is the meaning of 1 Timothy 2:15? — Women Saved In Childbearing
When was Publius Quirinius governor of Syria? – Census in Luke 2:2
Does Judges 5:30 say men are blessed if they have two wives?
How do you explain the command “You shall not kill” versus Exodus 22:18?
Who killed Goliath? — David or Elhanan