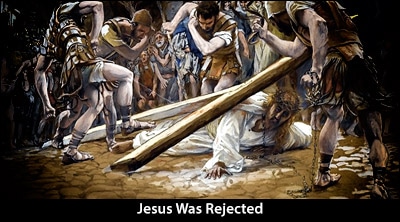 He was despised and rejected by men, a man of sorrows, and familiar with suffering . . .  Isaiah 53:3 (NIV)

Therefore the chief priests and the Pharisees convened a council, and were saying, “What are we doing? For this man is performing many signs. If we let Him go on like this, all men will believe in Him, and the Romans will come and take away both our place and our nation.” . . . He did not say this on his own, but as high priest that year he prophesied that Jesus would die for the Jewish nation, and not only for that nation but also for the scattered children of God, to bring them together and make them one. So from that day on they plotted to take his life.  John 11:47-53 (NIV)

He came to that which was his own, but his own did not receive him. Yet to all who received him, to those who believed in his name, he gave the right to become children of God . . . John 1:11-12  (NIV)

The prophecy of Isaiah 53:3 states that the Messiah would be rejected by men, and the gospels reveal that Jesus was rejected by both the religious leaders and crowds. He was repeatedly accused of using demonic power to cast out demons by the jealous religious leaders and the crowds were influenced. The national leaders had plotted Jesus’ death and, eventually, Christ was crucified.