Resurrection of Christ Was Prophesied 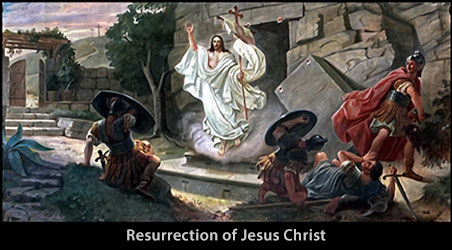 And he said to them, “Do not be amazed; you are looking for Jesus the Nazarene, who has been crucified. He has risen; He is not here; behold, here is the place where they laid Him. But go, tell His disciples and Peter, ‘He is going ahead of you to Galilee; there you will see Him, just as He told you.’” Mark 16:6-7  (NASB)

For David says of Him, “I SAW THE LORD ALWAYS IN MY PRESENCE; FOR HE IS AT MY RIGHT HAND, SO THAT I WILL NOT BE SHAKEN. THEREFORE MY HEART WAS GLAD AND MY TONGUE EXULTED; MOREOVER MY FLESH ALSO WILL LIVE IN HOPE; BECAUSE YOU WILL NOT ABANDON MY SOUL TO HADES, NOR ALLOW YOUR HOLY ONE TO UNDERGO DECAY.”  Acts 2:25-27 (NASB)

As for the fact that He raised Him up from the dead, no longer to return to decay, He has spoken in this way: “I WILL GIVE YOU THE HOLY and SURE blessings OF DAVID.” Therefore He also says in another Psalm, “YOU WILL NOT ALLOW YOUR HOLY ONE TO UNDERGO DECAY.” For David, after he had served the purpose of God in his own generation, fell asleep, and was laid among his fathers and underwent decay; but He whom God raised did not undergo decay. Therefore let it be known to you, brethren, that through Him forgiveness of sins is proclaimed to you, and through Him everyone who believes is freed from all things, from which you could not be freed through the Law of Moses.  Acts 13:34-39 (NASB)

The resurrection of Christ was prophesied in Psalm 16:10. The prophecy stated that the Messiah would not remain in the grave but would be resurrected. Both the gospel, secular and Jewish records clearly state that Christ was resurrected, either directly or indirectly.

“On the eve of Passover they hanged Yeshu of Nazareth (i.e Jesus) . . .” Babylonia Sanhedrin 43a.

The Toledoth Jesu states that Jesus’ tomb was empty and that it occurred by theft. They did not want to reveal that Christ was resurrected. The Bible does not ignore the Jewish accusation but explains why they said this.

And when they had assembled with the elders and counseled together, they gave a large sum of money to the soldiers, and said, “You are to say, ‘His disciples came by night and stole Him away while we were asleep.'” Matthew 28:12-13  (NASB)

“. . . in reference to the nails of the cross which were driven into His hands and feet. And. . . they cast lots for His clothes, and after they crucified Him distributed it among them. And that these things did happen, you can ascertain from the Acts of Pontius Pilate.’ First Apology 35.

“Now, there was about this time Jesus, a wise man, if it be lawful to call him a man. For he was a doer of surprising feats – a teacher of such men as receive the truth with pleasure. He drew over to him both many of the Jews and many of the Gentiles. He was [the] Christ; and when Pilate, at the suggestion of the principal men amongst us, had condemned him to the cross, those that loved him at the first did not forsake him, for he appeared to them alive again the third day . . .” Antiquities of the Jews 18.3.3.

The angel said to the women, “Do not be afraid; for I know that you are looking for Jesus who has been crucified. He is not here, for He has risen, just as He said. Come, see the place where He was lying. Go quickly and tell His disciples that He has risen from the dead; and behold, He is going ahead of you into Galilee, there you will see Him; behold, I have told you.” Matthew 28:5-7  (NASB)

And he said to them, “Do not be amazed; you are looking for Jesus the Nazarene, who has been crucified. He has risen; He is not here; behold, here is the place where they laid Him. Mark 16:6  (NASB)

But on the first day of the week, at early dawn, they came to the tomb bringing the spices which they had prepared. 2 And they found the stone rolled away from the tomb, 3 but when they entered, they did not find the body of the Lord Jesus. Luke 24:1-3  (NASB)

Now on the first day of the week Mary Magdalene came early to the tomb, while it was still dark, and saw the stone already taken away from the tomb. 2 So she ran and came to Simon Peter and to the other disciple whom Jesus loved, and said to them, “They have taken away the Lord out of the tomb, and we do not know where they have laid Him.” John 20:1-2  (NASB)

When they had carried out all that was written concerning Him, they took Him down from the cross and laid Him in a tomb. But God raised Him from the dead; and for many days He appeared to those who came up with Him from Galilee to Jerusalem, the very ones who are now His witnesses to the people. And we preach to you the good news of the promise made to the fathers, that God has fulfilled this promise to our children in that He raised up Jesus, as it is also written in the second Psalm, ‘You are My Son; today i have begotten You.’”  Acts 13:29-33  (NASB)

This last statement in Acts 13:33 quotes the prophecy in Psalm 2:7.