When Will the End of the World Occur? 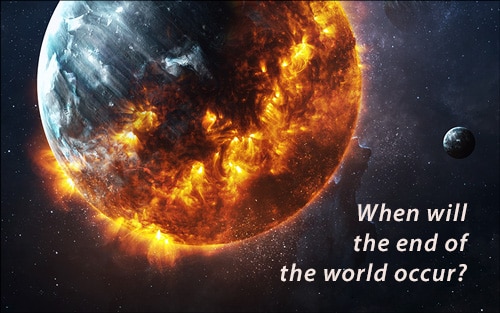 A couple of years ago, it was disappointing to read the headline, “End of the world 2018: Will the Rapture occur on April 23?” Once again someone who claimed to be a Christian declared that the rapture would occur on April 23, 2018 and the world was coming to an end.  Harold Camping declared that the rapture would occur on May 21, 2011. When the day passed and the event did not occur, he admitted his error and revised his date. He said that he had made a mistake and the real date was October 21, 2011. Ronald Weinland predicted that Christ would return on September 29, 2011 and when the rapture did not occur on that date, he revised the date to May 27, 2012. That date came and went and the world still exists to this day. (Now David Meade had declared that the rapture would occur on April 23, 2018, and Mathieu Jean-Marc Joseph Rodriguez said it would happen on June 24, 2018, but they were not correct either.) The purpose of this article is to answer the question, “When will the end of the world occur?”

These future theorists read a passage of the Bible and since they do not have breadth of knowledge and an accurate understanding of the Bible, they make predictions that are contradicted by the Bible. In recent years these theorists have pointed us to spectacular signs in connection with passages in the Bible that supposedly prove the rapture is near and the end of the world is imminent. We have heard that the planet called Nibiru would crash into Earth.[1] Some have claimed that “codes in the Bible suggest the end of the world is imminent.”[2] Some of the theorists add blood moons and other celestial alignments that are to support their conclusions. Then these theorists add passages from the book of Revelation and make calculations that give us future dates for the expected rapture.

One theory suggests the end times dates back to astrological constellations appearing on November 23, matching the book of Revelation 12:1-2. The passage signals the start of the Rapture and the second coming of Jesus Christ.

The passage 12:1–2 reads: “And a great sign appeared in heaven: a woman clothed with the sun, with the moon under her feet, and on her head a crown of 12 stars. She was pregnant and was crying out in birth pains and the agony of giving birth.”

It is thought that Virgo is the woman from the passage. On April 23, the sun and moon will be in Virgo, as will Jupiter, which represents the Messiah.[3]

Sadly, the author of this theory did not realize that Revelation 12:1-2 does not refer to a unique once-in-a-century sign involving Virgo, Leo and Serpens-Ophiuchus and the Planet X, which NASA has debunked as not existing.[4] He did not understand that the woman in Revelation 12:1 refers to the nation of Israel.

Genesis 37:9-11 is the key passage to understanding Revelation 12:1. This passage describes the second dream of Joseph. In the dream Joseph sees a sun, moon and eleven stars. He sees only eleven stars because the dream is about his father, mother and eleven brothers bowing down to him. Since Joseph is the twelfth son, he is the twelfth star. Joseph’s father is Jacob or Israel. The twelve stars are the twelve sons of Jacob or the twelve tribes of Israel. It should be noted that it is common in the book of Revelation to refer to the twelve tribes (Revelation 7:4-8; 21:12). That is, Revelation 12:1 refers to the nation of Israel and not some celestial alignment or configuration of constellations. The child in Revelation 12:2 is the Messiah, Jesus Christ. Israel is pictured as longing and waiting for His coming. Therefore, the theorists have completely misunderstood the prophecy of Revelation 12:1-2. The symbols are already defined in the Bible. They are not time clues to the future.

Overview of the Future

Therefore, when will the rapture and the end of the world occur? The answer is given to us by Jesus in Matthew 24. In Matthew 24 Jesus provides signs of His return or His second coming. The first time He came, died and returned to life as proof that He was our Savior and God (Romans 1:4; 4:25). When His disciples asked about the signs of His coming, Jesus said He gave them a list of signs (Matthew 24:3-28).

In verses 4-14, Jesus described events that would occur prior to and during the first part of the period of time called the Tribulation. The signs include famines, earthquakes, Christians will be hated and persecuted, false prophets will arise, evil will grow and yet the gospel will spread throughout the world. All of these signs are currently taking place.

In verse 15, Jesus describes an event that will occur in the middle of the Tribulation.

Therefore when you see the abomination of desolation which was spoken of through Daniel the prophet, standing in the holy place (let the reader understand), then those who are in Judea must flee to the mountains. Matthew 24:15-16 (NASB)

This sign is important since Jesus refers back to Daniel 9:27. In Daniel 9:27 we read this,

And he will make a firm covenant with the many for one week, but in the middle of the week he will put a stop to sacrifice and grain offering; and on the wing of abominations will come one who makes desolate, even until a complete destruction, one that is decreed, is poured out on the one who makes desolate.” Daniel 9:27 (NASB)

In this passage the prophet Daniel reveals that at some time in the future a peace treaty or “a firm covenant” will finally occur in the Middle East and there will be peace in the Middle East for Israel. The period of peace will be promised for seven years. However, the peace will only last for three and one half years. The peace will be broken when the abomination of desolation breaks the peace. 2 Thessalonians 2:3-4 says that the abomination will occur when a man sits in the temple in Jerusalem and declares himself to be God. This man is the antichrist who is described in Revelation 13:1-10. This means that a Jewish temple will exist in the city of Jerusalem.

In Matthew 24:16-28, the last part of the Tribulation is described. In verse 21 Jesus calls the last three and one half years “great tribulation.” Jesus describes this time as a horrible time.

In verses 29-31 Jesus describes His return or second coming, which will be followed by judgment. 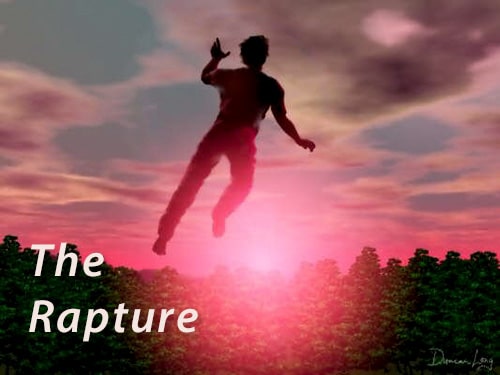 Time of the Future Rapture

For the Lord Himself will descend from heaven with a shout, with the voice of the archangel and with the trumpet of God, and the dead in Christ will rise first. Then we who are alive and remain will be caught up together with them in the clouds to meet the Lord in the air, and so we shall always be with the Lord. Therefore comfort one another with these words. 1 Thessalonians 4:16-18 (NASB)

Here we discover that at the second coming of Christ, Jesus will descend from heaven. Those Christians who have already died will be resurrected first and then all living Christians will be “caught up” into the air to be with Jesus. The Greek word that is translated as “caught up” is harpazo. The Greek word means “to snatch away.” That is, Christians will be removed from the earth. Jesus referred to this event in John 14:3 when He said, “I will come again and receive you to Myself.”

Because you have kept the word of My perseverance, I also will keep you from the hour of testing, that hour which is about to come upon the whole world, to test those who dwell on the earth. Revelation 3:10 (NASB)

The same promise is given in 1 Thessalonians 1:10,

. . . and to wait for His Son from heaven, whom He raised from the dead, that is Jesus, who rescues us from the wrath to come. 1 Thessalonians 1:10 (NASB)

The fourth reason is that God protected the Israelites during the plagues that the nation of Egypt suffered through. If God did that for His chosen people, why would He not do that for His church?

Therefore, we discover that the prophets and Christ Himself tell us that Christians will be raptured and escape the Tribulation. The Rapture occurs first and then horrors are unleashed on the world before the universe is destroyed.

Are you worried about where you will spend eternity? You should only be concerned if God has not forgiven your sins and you are not going to heaven. We urge you to read Searching For God and discover how to go to heaven.

When will the End of the World Occur?