On March 3, 2008 billionaire Oprah Winfrey conducted the first global webcast session in a series devoted to the promotion of Eckhart Tolle’s New Age enlightenment book called A New Earth. According to Oprah about 700,000 people connected to the webcast representing 170 countries from around the world[1]. It was a technology first – the first global webcast ever offered. Unfortunately, it was also the first of a ten internet class series promoting Eckhart Tolle’s version of New Age religion. 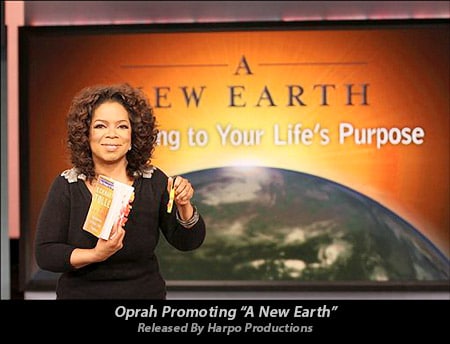 Background of A New Earth

During the first webcast of A New Earth, Eckhart Tolle stated that his earlier book, The Power of Now, was the product of multiple visits to San Francisco, California. He said that he felt a strong urge to travel to the west coast of North America even though he did not know why. When he arrived, he felt a “strong stream” and produced the book over numerous writing sessions. He described the effect of the strong steam as a force. Later he added that “rather than wanting to write the book, the book wanted to be written.”[2] Consequently, the book was born. Eckhart stated that his latest book, A New Earth, was written in the same manner. He described the writing process as “a flow.” On some days “the flow” was strong. On other days “the flow” was less or none at all. He adds,

Eckhart Tolle commented that he had to move to the west coast to write because that was where the energy field was. He could not rely only on his thinking. Maybe the most significant comment from Tolle was that the book was not channeled, but his words were inspired. We must ask the question, “Inspired by what?”

Teachings of A New Earth

During Oprah’s first satellite seminar, Mr. Tolle told the audience that we must be still in order to determine our purpose in life.

We must practice moments of stillness so that we are not continuously absorbed with incessant mental noise that we call thinking, most of which is unnecessary and repetitive . . . this is necessary in order to get to where the answers are . . . potentially.[4]

Eckhart Tolle is an advocate of Hindu philosophy with modern day wrappings.

First, like Maharishi, Tolle’s religion is a form of Hinduism. His teaching comes from the Upanishads, the concluding portions of the Vedas (the oldest Hindu scriptures). The Upanishads contain the essence of Vedic teaching and are the foundation of present day Hinduism.

Consequently, we should not be surprised at some of his teachings. What does Tolle believe? Here are a few examples from his books.

My holiness is my salvation. Who you are requires no belief. Heaven is not a location but an inner realm of consciousness. The man on the cross is an archatypel [sic] image; he is every man and woman. My mind is part of God’s, I am very holy, my holiness is my salvation and my salvation comes from me. There is no sin. Do not make the pathetic error of clinging to the Old Rugged Cross. The only message of the crucifixion is that you can overcome the cross.[6]

Eckhart Tolle frequently quotes the Bible to support his religious beliefs. In fact, he says that the title of his book A New Earth is taken from Revelation 21:1.[7] Yet, he distorts the meaning of the passages he quotes and rejects the truths that God has given us in the Bible. Compare these statements from God to Eckhart Tolle’s statements above.

For this reason I endure all things for the sake of those who are chosen, so that they also may obtain the salvation which is in Christ Jesus and with it eternal glory. (NASB) 2 Tim. 2:10

For the word of the cross is foolishness to those who are perishing, but to us who are being saved it is the power of God. (NASB) 1 Cor. 1:18

. . . and He Himself bore our sins in His body on the cross, so that we might die to sin and live to righteousness; for by His wounds you were healed. (NASB) 1 Pet. 2:24

Even though Oprah was raised in a Baptist Church as a child, she has departed from the faith. During one of her television programs she made the following statement to her audience,

Oprah openly states that she has left her Baptist Church heritage and has found meaning in life. Her ten week course on enlightenment is nothing but New Age religion with a different wrapping and bow.

Oprah believes that there are many ways to God. Jesus is not the only way. During one of her telecasts she openly argued with her audience about this very point.[9] She has rejected God’s warning that Jesus is the only way,

And there is salvation in no one else; for there is no other name under heaven that has been given among men by which we must be saved. (NASB) Acts 4:12

She is not offering enlightenment for the soul but bondage to demonic doctrines. She is promoting a false teacher with her vast fortune and popularity. This is a warning about Oprah Winfrey and her teaching. She is a false teacher since she is helping Eckhart Tolle spread his New Age religion. She is also promoting New Age author Marianne Williamson’s A Course in Miracles – a year long course that is intended to retrain the thinking of its students as to what they believe about God. She is the queen of the gurus.

The spiritual war is raging and Satan has a billionaire supporting his anti-Christ teachings. God warned us that this would occur.

But the Spirit explicitly says that in later times some will fall away from the faith, paying attention to deceitful spirits and doctrines of demons . . . (NASB) 1 Tim. 4:1

God has warned us to flee such individuals and their teachings. We have been warned to flee the doctrines of demons or the occult.

For many deceivers have gone out into the world, those who do not acknowledge Jesus Christ as coming in the flesh. This is the deceiver and the antichrist. (NASB) 2 John 7

Do not be deceived, my beloved brethren. Every good thing given and every perfect gift is from above, coming down from the Father of lights, with whom there is no variation or shifting shadow. (NASB) James 1:16-17

We are born wicked and sinful. Only God is holy. We need our sins forgiven and Jesus Christ suffered the penalty that you and I deserve because we sinned. Instead, a holy being – Jesus Christ – died for us and by believing in Him we can live in heaven forever. Heaven is not your It is not your consciousness or my It is not our consciousness. Jesus said that it is a real place (John 14:2). Jesus Christ is the one and only God who exists. Those who believe in Him can enter heaven someday. Belief is all that He asks. That is a difficult thing to ask for to many people!

Jesus is the one and only God – there is no other. You are not God. No one else is God, and neither is your consciousness! Jesus is the only way. He is the only true Lord, the only real Savior of the world, and the ultimate and only majestic God of the universe. If you’d like to learn more, visit the page Searching for God.