Need Faith To Gain Wealth? – Error of the Prosperity Gospel

Africa is rapidly exploding with the acceptance of the prosperity gospel that teaches God wants every follower of Jesus to be wealthy. While the message is old and familiar to many in the United States and around the world, the words of this “gospel” are new and fresh in the ears of many in Africa. The July 2007 issue of Christianity Today captures the African movement with these words,

Pastor Michael Okonokwo rises from his gold-coated throne before 4,000 onlookers in Lagos, Nigeria. “Hallelujah!” bellows the self-proclaimed “father of fathers, pastor of pastors,” wearing a glittery green gown. The crowd stands and roars.

A 62-year-old former banker and graduate of the Morris Cerullo School of Ministry in San Diego, California, Okonokwo touts a seminar called “Financial Intelligence”; if you’ve missed it, he encourages you to buy the tapes. Okonokwo describes the “intelligence” he preaches in his book Controlling Wealth God’s Way: “[M]any are ignorant of the fact that God has already made provision for his children to be wealthy here on earth. When I say wealthy, I mean very, very rich . . . Break loose! It is not a sin to desire to be wealthy.” [1] 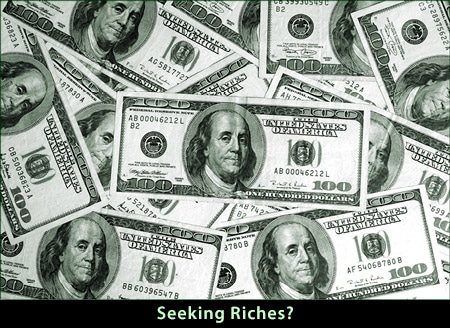 Pastor Okonokwo is part of the faith movement within Christianity. He teaches that if one has enough faith in Jesus, that person can own anything that he or she desires.

The faith movement is a distortion of Jesus’ message. But one would not know that from the preachers and teachers involved in the movement. They convince the biblically untaught that if they are not wealthy, they are not spiritual enough. In the United States on the Trinity Broadcasting Network (TBN) program some years ago, Fredrick Price made this statement about faith, wealth and Jesus,

The faith movement within Christianity is extremely popular, since it promises wealth to people who have enough faith to give large sums of money. But according to the advocates of the faith movement, there is a catch to getting all the wealth that God intends for you. Oral Roberts has stated,

The seed of giving is the seed of faith. And the seed has to be planted before we can speak to our mountain of need to be removed![3]

According to Oral Roberts, the seed is money. One must give some money before one can speak to one’s need. That is, before one can ask God to make him or her wealthy, one has to give first. The more one gives, the more one gets. Many faith preachers encourage their listeners to give to their ministries so that they can get started becoming wealthy.

African preachers of the faith movement have learned to mimic the American faith movement preachers very well. For example, African pastor Rev. Felix Omobude encouraged his listeners on one occasion to open themselves up to blessing and wealth by giving N25,000 (about $200).

Local schoolteachers earn only $150 per month, so the amount is significant. Yet, more than 300 people swarm Omobude, who rubs oil from a bowl on their palms. Within minutes, the church nets a tax-free $60,000. Similar scenes unfold every day in countless venues throughout sub-Saharan Africa, where prosperity-tinged Pentecostalism is growing faster . . . than all religious groups, including Islam . . . They make up more than a fourth of Nigeria’s population, more than a third of South Africa’s, and a whopping 56 percent of Kenya’s.[4]

According to the faith movement, we need faith to be wealthy, and we are to give large sums before we can receive a lot. Is Pastor Okonokwo correct when he declares that it is okay to desire and seek to be wealthy? Those who preach that it is God’s will for every Christian to seek to be wealthy or desire wealth have either ignored the following statement from Jesus or do not understand what He said.

Then He said to them, “Beware, and be on your guard against every form of greed; for not even when one has an abundance does his life consist of his possessions.” (NASB) Luke 12:15

Jesus warns us about our desire for the things of this world, including wealth. The Greek word that Jesus used for “greed” is plexonexias. It refers “to a strong desire to acquire more and more material possessions.” But the phrase “every form of greed” indicates that every desire to obtain more wealth is a concern. Ecclesiastes warns us that our eyes never stop wanting more.

All things are wearisome; man is not able to tell it. The eye is not satisfied with seeing, nor is the ear filled with hearing . . (NASB) Eccl. 1:8

Our longing for more things of this world never ceases and the same is true about money. That is the message of Ecclesiastes. So then, how does one know when one’s desire is legitimate and not just a desire for more? To want more and more can be simply nothing more than greed. Therefore, Jesus warned us that life is more than possessions and wealth. This is a truth that we often forget, since life is so full of getting and spending that we can lose our focus.

The gospel of Matthew records these words from Jesus,

Jesus says that we are not to store up earthly treasure or wealth. Why? Because there is a great risk that it will capture your heart and pull you away from Him. Wealth has kept many men and women from God. Wealth keeps men and women from believing in God (Luke 18:25), and wealth can hinder believers from growing in their spiritual walk with Him (2 Tim. 3:2, 4).

Pastor Michael Okonokwo’s encouragement that it is okay to desire wealth is a stunning unbiblical statement. It ignores Jesus’ warnings. It also ignores the apostle Paul’s encouragement to be content with what we have,

If we have food and covering, with these we shall be content. But those who want to get rich fall into temptation and a snare and many foolish and harmful desires which plunge men into ruin and destruction. For the love of money is a root of all sorts of evil, and some by longing for it have wandered away from the faith and pierced themselves with many griefs. (NASB) 1 Tim. 6:8-10

Paul also warns us that we should not desire to become wealthy. The desire for wealth is dangerous. Unfortunately, the faith movement is strongly focused on getting more wealth.

The faith movement within Christianity is unbiblical. According to the preachers and teachers within the faith movement, prosperity is a divine right of every believer. The movement subtly refocuses Christians away from Jesus and onto something else – money. Faith sounds spiritual, and it becomes a tool to get more wealth. Oh, one must also give away large sums of it first.

For, I think, God has exhibited us apostles last of all, as men condemned to death; because we have become a spectacle to the world, both to angels and to men . . . To this present hour we are both hungry and thirsty, and are poorly clothed, and are roughly treated, and are homeless; and we toil, working with our own hands; when we are reviled, we bless; when we are persecuted, we endure; when we are slandered, we try to conciliate; we have become as the scum of the world, the dregs of all things, even until now. (NASB) 1 Cor. 4:9, 11-13

The apostles were men of great faith. Paul was even bitten by a snake, but he did not suffer from the bite (Acts 28:1-6). If the faith movement is correct, why wasn’t the apostle very wealthy?

The answer is simple. The faith movement is a distortion of the message of Jesus and the apostles. Our focus in life should not be the accumulation of wealth, but to know Jesus Christ. The passion of Paul’s heart was to know Jesus and nothing more – not even money.

More than that, I count all things to be loss in view of the surpassing value of knowing Christ Jesus my Lord, for whom I have suffered the loss of all things, and count them but rubbish so that I may gain Christ . . .”(NASB) Phil. 3:8

Jesus told us that our priority, our focus, our passion is to be on God.

But seek first His kingdom and His righteousness, and all these things will be added to you. (NASB) Matt. 6:33

Then God will determine what He gives us. To some believers He gives wealth and to other believers such as the apostle He did not give wealth. God has only promised to meet our daily needs. Our focus is to be Jesus and nothing more! What is your focus?