Israel Knohl, an expert in Talmudic and biblical language at Jerusalem’s Hebrew University, when referring to “Gabriel’s Revelation” said,

“This should shake our basic view of Christianity,” he said as he sat in his office of the Shalom Hartman Institute in Jerusalem where he is a senior fellow in addition to being the Yehezkel Kaufman Professor of Biblical Studies at Hebrew University. “Resurrection after three days becomes a motif developed before Jesus, which runs contrary to nearly all scholarship. What happens in the New Testament was adopted by Jesus and his followers based on an earlier messiah story.”[1]

Dr. Timothy Gray, a professor of Biblical Studies at the Augustine Institute in Denver, has disagreed and has responded in the Catholic News Agency (CNA) with,

[There is] No evidence of a suffering messiah in the Jewish tradition, therefore the Church invented these things . . . Now we find out there is evidence, and instead we find the historical portrait of the Gospels is more probable than we thought, the response is “well, see, this disproves Christianity.”[2]

“Gabriel’s Revelation” appears on a stone tablet that is three feet tall and contains 87 lines of Hebrew. The words are written with ink across two columns, as those in the Torah. The stone is broken and consequently some of the text is missing. Some of the writing is also faded.[3] The stone tablet was probably found near the Dead Sea in Jordan according to some scholars.[4]

Some critics hail the discovery of the stone tablet as a new find. But the stone is not really a new discovery. It was found about a decade ago and bought from a Jordanian antiquities dealer by an Israeli-Swiss collector who kept it in his Zurich home. When an Israeli scholar examined it closely a few years ago and wrote a paper on it last year, interest began to rise.

The text on the stone appears to be apocalyptic in nature.

The text appears to mention the archangels Gabriel and Michael, and there are frequent references to “YHWH of Hosts.” The phrase “my servant David” also appears, as does a fascinating reference to “the Prince of Princes.” And . . a frustrating line that begins with the words… “In three days.” Echoes of many biblical books and extra-biblical texts appear in the document, as well as other features wholly unparalleled in known literature within the tradition.”[5]

. . . this new text seems to predict that in three days the evil will be defeated by the righteous. They read as follows: “By three days you shall know that thus said the Lord of Hosts, the God of Israel, the evil has been broken by righteousness” (Lines 19–21). 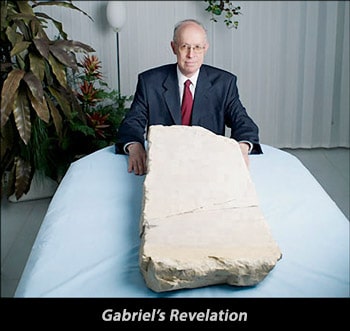 Knohl argues the tablet is about the death of a leader of the Jews who will be resurrected in three days, and that it reflects a wider belief in a suffering, dying, and resurrected messiah. He believes that this has implications for the Christian view of the life and death of Jesus.

“His mission is that he has to be put to death by the Romans to suffer so his blood will be the sign for redemption to come,” Knohl said. “This is the sign of the son of Joseph. This is the conscious view of Jesus himself. This gives the Last Supper an absolutely different meaning. To shed blood is not for the sins of people but to bring redemption to Israel.”[8]

Another scholar who has studied the tablet, Moshe Bar-Asher, president of the Israeli Academy of Hebrew Language, said Knohl’s interpretation is not certain.

“There is one problem,” Bar-Asher said. “In crucial places of the text there is lack of text. I understand Knohl’s tendency to find there keys to the pre-Christian period, but in two to three crucial lines of text there are a lot of missing words.”[9]

Line 80 of the text is the most important. It should be noted that line 80 is not very clear and the brackets indicate that the author guessed about the correct wording. Ben Witherington, an early-Christianity expert at Asbury Theological Seminary in Wilmore, Ky, makes the following statement,

Long story short– this stone certainly does not demonstrate that the Gospel passion stories are created on the basis of this stone text, which appears to be a Dead Sea text. For one thing the text is hard to read at crucial junctures, and it is not absolutely clear it is talking about a risen messiah.[10]

A Few Things To Consider

Here are some important things to consider:

Uncertain Date. A fundamental point that is being forgotten in much of the discussion is that the dating of the stone varies from the late first century B.C. or early first century A.D.[11] This means it is presumptuous to claim that the words were written on the stone before Jesus was born. They could have also been written after Jesus died and returned to life. The writing could simply be someone’s incorrect motivation to affirm the events surrounding Jesus’ death and return to life.

Unclear Text. It is important to note that key portions of the writing on the stone are unintelligible. The scholars are divided as to the meaning because some of the words are not distinct or many of the words are missing.

Regarding Mr. Knohl’s thesis, Mr. Bar-Asher is also respectful but cautious. “There is one problem,” he said. “In crucial places of the text there is lack of text. I understand Knohl’s tendency to find there keys to the pre-Christian period, but in two to three crucial lines of text there are a lot of missing words.”[12]

So, the actual reading is contested or contestable, and in the most interesting spot–as is oddly so typical.[13]

That is unfortunate because it means the discussion about “Gabriel’s Revelation” is seriously flawed. Twentieth century scholars are at an enormous disadvantage in attempting to understand the writing on the stone tablet since some look with biased motives.

The Ancient Messiah. The truth is that numerous books and articles have been published which cite ancient scrolls that supposedly claim there were messiahs before Jesus. Some authors attempt to prove that Jesus was just another one in a series and, therefore, was not unique. Such reasoning misses the fact that the Jewish people were looking for the promised Messiah. One can hardly read the New Testament without realizing that the Jews were looking for the promised Messiah. This is obvious in John 1:20-21, where John the Baptist was asked if he was the Christ or the Messiah.

Later in John 6:14 the people asked about the Messiah or “the prophet” again.

Therefore when the people saw the sign which He had performed, they said, “This is truly the Prophet who is to come into the world.” (NASB) John 6:14

The reference to “the prophet” refers back to Moses’ prediction in Deuteronomy 18:15 that a prophet would come in the future. The Jews believed that this prophet was the Messiah. The same question appears again in John 7:40. In Acts 17:3 and 18:5 he is called “the Christ.” The word Christ means messiah in the Greek.

The True Messiah. There were and have been numerous individuals who have claimed to be messiahs. But there is only one who qualifies, and he is Jesus of Nazareth. The ancient prophet Daniel predicted in the 500 B.C. era that the true prophet – Messiah the Prince – would be cut-off after Nisan 10, A.D. 33. That date is the first day of the week in which Jesus died. So it does not matter who claimed to be Messiah. Only one individual qualifies to be the Messiah, and He is Jesus. It does not matter if others claim to be the Messiah. They do not qualify if they did not die during that week. God has not left us afloat on the sea of uncertainty.

Did some Jews read Isaiah 53 and Psalm 16:10 and understand that the Messiah would die and then return to life? If so, they correctly understood the ancient prophecies. We should not be surprised if we find references to “suffering messiahs” in the ancient literature if in fact we happen to find any.

The following passage sums it all up,

For the word of the cross is foolishness to those who are perishing, but to us who are being saved it is the power of God. For it is written,

“I WILL DESTROY THE WISDOM OF THE WISE, AND THE CLEVERNESS OF THE CLEVER I WILL SET ASIDE.”

Where is the wise man? Where is the scribe? Where is the debater of this age? Has not God made foolish the wisdom of the world? For since in the wisdom of God the world through its wisdom did not come to know God, God was well-pleased through the foolishness of the message preached to save those who believe. For indeed Jews ask for signs and Greeks search for wisdom; but we preach Christ crucified, to Jews a stumbling block and to Gentiles foolishness, but to those who are the called, both Jews and Greeks, Christ the power of God and the wisdom of God. (NASB) 1 Cor. 1:18-24