Empty of Empties — Truth About Life

Have you ever stopped long enough to think about life? What about your life? For some the closest they ever come is counting their birthdays. Someone once said,

Birthdays are good for you. Statistics show that people who live the longest have the most birthdays!

Some argue that life begins at conception, and others have argued that life starts with the first breath. Someone has humorously said that life begins when the last kid leaves home and the dog dies. We may laugh at these comments, but Henry David Thoreau brings us back to reality when he says,

Most men in this world live out their lives in quiet desperation. 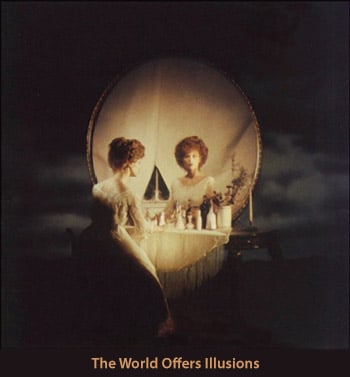 What is Life All About?

The book of Ecclesiastes was written by Solomon. Solomon also wrote the book of Proverbs, and the Song of Solomon. He was wiser than any man who lived before him or after him (1 Kings 3:12). Yet later in life, he drifted away from the Lord and his heart was not completely devoted to God because of the many beautiful wives and concubines that he had (1 Kings 11:1-4). I believe that Solomon wrote the book of Ecclesiastes after he returned to the Lord. I believe that Ecclesiastes captures what he found during the period of time that his heart was not completely devoted to the Lord.

The second verse of Ecclesiastes is a summary of the findings of the book,

The Hebrew word that is translated as “vanity” has the sense of “vapor, wind, breath, vanity, emptiness, and worthlessness.” The word occurs twenty-two times in Ecclesiastes. The theme of the book is that life is empty or meaningless. Life is like a soap bubble. Eventually, the bubble pops and there is nothing. The theme could also be described as, “Vapor of vapors,” “meaninglessness of meaninglessness,” and “Oh, how utterly empty.” One commentator said, “Oh, how utterly senseless.” That is Solomon’s theme.

What is Solomon’s proof? He starts explaining in verse 2.

What advantage does man have in all his work which he does under the sun?”(NASB) Ecclesiastes 1:3

What advantage do we have in all the work that we do throughout our life? The implication, “None!” The Hebrew word translated as “advantage” has the idea of “profit” or “gain.” The phrase “under the sun” occurs 29 times in Ecclesiastes and it refers to our short, vulnerable life here on planet earth. If we put it all together, Solomon is telling us that there is no lasting and meaningful profit or gain as the result of a person’s hard labor in this life. Life does not provide us with any real, credible dividends. We work hard. We earn a salary. The money comes and the money goes. No matter how much we have, we always want more! Shakespeare wrote,

Life is a tale told by an idiot, full of sound and fury., signifying nothing.”[1]

Work in this life results in nothing. We just do not realize it. For those who because of their riches or their fame believe that wealth and honor are an accomplishment, consider that Solomon had both. He had it all and yet he recognized the truth that life is empty.

A generation goes and a generation comes,
But the earth remains forever. (NASB) Ecclesiastes 1:4

The next verse is not any better,

Also, the sun rises and the sun sets;
And hastening to its place it rises there again. (NASB) Ecclesiastes 1:5

Also, the wind comes and goes, but it always returns.

Blowing toward the south,
Then turning toward the north,
The wind continues swirling along;
And on its circular courses the wind returns. (NASB) Ecclesiastes 1:6

The wind may blow here and blow there, but it eventually returns. The water in the rivers does the same. It flows into the sea, evaporates, becomes a cloud, blows over the land, comes down as rain, and does it all over again.

The sun comes, the winds come, the rain comes, and they all disappear. They always return, but we do not. We come and we go. That is life. There is no advantage in all our labor, toil, sweat, and hard work. We come and we go, and cannot take anything with us when we die. It is over!

The rest of scripture agrees with Solomon. This is not just Solomon’s odd and incorrect perception of life. Notice Psalm 144:4.

Here we are told that we are like “breath,” and our days are like a shadow. A shadow is not the real person. A shadow is just a shadow. It is not the person. Life is empty, and we do not usually stop long enough to notice. We only think that we are accomplishing something meaningful in this life. Consider another psalm,

Behold, You have made my days as handbreadths,
And my lifetime as nothing in Your sight;
Surely every man at his best is a mere breath. Selah.
Surely every man walks about as a phantom;
Surely they make an uproar for nothing;
He amasses riches and does not know who will gather them. (NASB) Psalm 39:5-6

Life is a phantom and in spite of all our efforts, we accomplish nothing that is lasting and meaningful. We come and we go, and that is it. Herman Hesse wrote,

Life passes like a flash of lightning
Whose blaze barely lasts long enough to use
While the earth and sky stand still forever.

That is us! We are a blip in time, but not the earth, the sun, the wind, or the rain. They are always here, but not us!

We are just clueless. We do nor stop long enough to realize that life is monotonous and meaningless.

All things are wearisome;
Man is not able to tell it.
The eye is not satisfied with seeing,
Nor is the ear filled with hearing. (NASB) Ecclesiastes 1:8

We are so busy “panting” throughout the day, day after day, week after week, month after month, and year after year, that we never realize that life is just weary. We clean the house one day and eventually have to do it again. We pull the weeds and they come back. We repair the car and have to do it again. We cook meals every day, every week, every month, and every year. Some day we will die and the monotony will be over. Life is a soap bubble and then it goes “pop.” There is nothing left.

Are you an inventor? Do you think that you have offered something new or done something that is beneficial? Solomon has these words for anyone who thinks that he or she has a great contribution to the human race.

Is there anything of which one might say,
“See this, it is new”?
Already it has existed for ages
Which were before us. (NASB) Ecclesiastes 1:9-10

The word that Solomon uses for “new” has the idea of something that is uniquely new. That is, a creative thought that does not depend upon anything from the past. Unfortunately, all of man’s ideas leverage or depend upon some past discovery. We build upon the thoughts and ideas of others in our creative acts. We build on one another’s theories, concepts, and suggestions. We cannot create anything new as God does. We only think that we have some great concept to offer the human race.

For those looking for fame, eventually the world will forget about you after some years have elapsed.

There is no remembrance of earlier things;
And also of the later things which will occur,
There will be for them no remembrance
Among those who will come later still. (NASB) Ecclesiastes 1:11

We only think that we can accomplish something significant that lasts after we have gone, after we have disappeared. Given enough time, we will be forgotten.

Life Is A Big Fat Zero

The universe is indifferent. Why are we here upon this puny heap spinning in infinite space? I have not the slightest idea. Nor, I think that anyone else does either.

He is correct if one is a non-Christian, but for one who believes in Jesus Christ and yields himself or herself to Him, life can have meaning.

For the Christian, God has promised that our labor is not in vain if it is done for Him.

Therefore, my beloved brethren, be steadfast, immovable, always abounding in the work of the Lord, knowing that your toil is not in vain in the Lord. (NASB) 1 Corinthians 15:58

God has encouraged us not to love the world.

We only think that this world has something to offer. But there is nothing here. We cannot keep it. We should not seek fame and fortune, nor should we fear death. There is nothing in this world that is worth keeping. The song “This World is Not My Home” has captured this reality for one who believes in Jesus Christ,

This world is not my home, I’m just passing through.
My treasures are laid up somewhere beyond the blue.
The angels beckon me from Heaven’s open door
And I can’t feel at home in this world anymore.

O Lord you know I have no friend like you
If Heaven’s not my home, then Lord what will I do?
The angels beckon me from Heaven’s open door
And I can’t feel at home in this world anymore.
They’re all expecting me and that’s one thing I know.
My Savior pardoned me and now I onward go.
I know He’ll take me through, though I am weak and poor.

What is the conclusion? It is provided for us by Solomon at the end of Ecclesiastes.

The conclusion, when all has been heard, is: fear God and keep His commandments, because this applies to every person.”(NASB) Ecclesiastes 12:13

The conclusion is that the only meaningful thing in life is to fear or honor God and obey Him. His first command is to believe in Jesus Christ,

This is His commandment, that we believe in the name of His Son Jesus Christ, and love one another, just as He commanded us. (NASB) 1 John 3:23

Is this true of you? Do you believe that Jesus is your God and the One who can forgive your sins? If this is true of you, then you will be willing to obey Him and then all your labor under the sun will “not be in vain.”