The Kingdom of God is in Your Midst 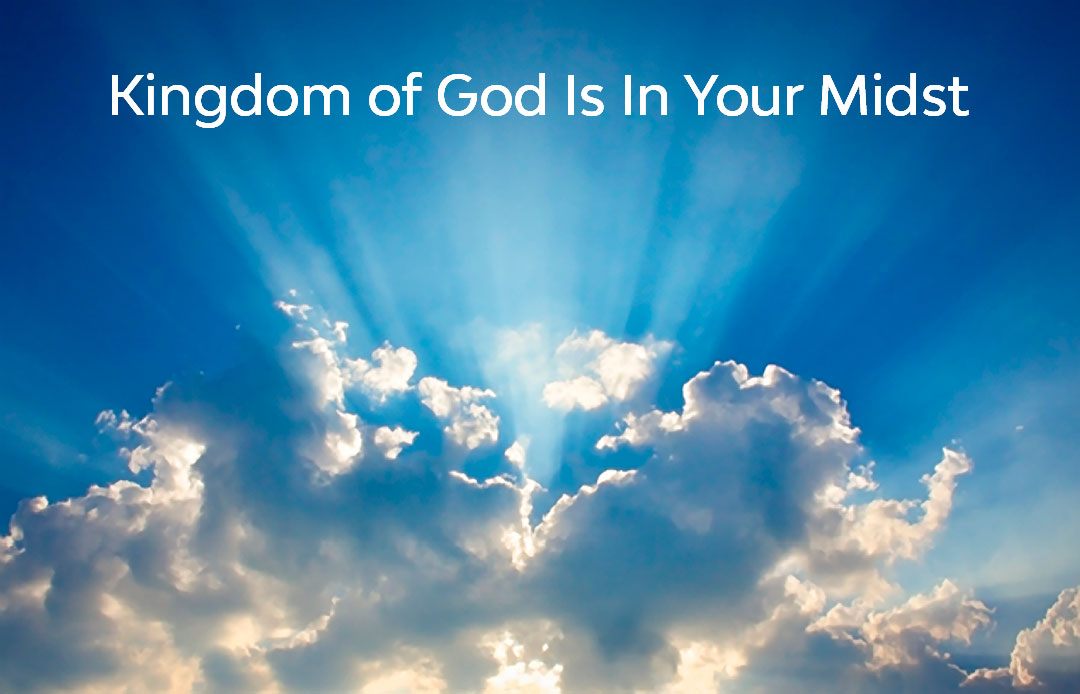 Luke 17:20-21 states that one day when Jesus was asked when the kingdom was coming, He replied with, “The kingdom of God is in your midst.” This important answer has confused many people. Anyone who has read the Bible from Genesis through Revelation has learned that the word “kingdom” occurs many times. Unless the reader is aware that the word “kingdom” has two different meanings, great misunderstandings will occur. A careful study of the word translated as “kingdom” reveals there are actually two different “kingdoms” mentioned in Scripture.

Those who are familiar with the English language are aware that the word “bill” has different meanings. The word “bill” can refer to the beak of a duck, the muzzle of a platypus, the point of an anchor, a dollar bill, a legal document, a list of charges for services rendered, and the front part of a baseball cap, to name a few. In the Bible, the term “kingdom” can refer to God’s universal kingdom or His spiritual kingdom. Therefore, in order to understand Jesus’ statement that “The kingdom of God is in your midst,” we will begin with an explanation of the two meanings of “kingdom.” We will follow with the study in Luke 17:20-21.

Psalm 10:16 is the first passage I want to introduce about the universal kingdom of God.

The LORD is King forever and ever;
Nations have perished from His land.
Psalm 10:16 (NASB)

It tells us that the Lord our God is king forever. Not only is our God eternal, but He is also the eternal, sovereign King of everything that He has created. Consequently, it is clear that His dominion includes all the nations of the earth. His kingdom includes every person in every nation on earth. His kingdom also includes everything in the invisible world, such as the angels and whatever else may be in heaven. Since we are also told that He is “King forever and ever,” we are to understand that His kingdom existed before the nations and it will exist after the nations are destroyed (2 Peter 3:10-13; Revelation 20:11).

To make known to the sons of men Your mighty acts
And the glory of the majesty of Your kingdom.
Your kingdom is an everlasting kingdom,
And Your dominion endures throughout all generations.
Psalm 145:12-13 (NASB)

The universal kingdom will include God’s spiritual kingdom which includes all believers who are on earth and in heaven (Isaiah 65 and Revelation 21-22). The universal kingdom will also include all the unbelievers on earth and those living in hell, which is also called the lake of fire. They are not part of the spiritual kingdom and they will continue to exist in suffering forever because they rejected Christ and rebelled against God (Daniel 12:2; Revelation 20:10, 14-15).

God’s spiritual kingdom is also mentioned in the Old Testament. One of the most obvious passages is 2 Kings 2:1, where the prophet Elijah was taken to heaven. He never suffered the pain of physical death.

And it came about when the LORD was about to take up Elijah by a whirlwind to heaven, that Elijah went with Elisha from Gilgal. 2 Kings 2.1 (NASB)

David was referring to meeting his dead son in heaven some day.

Maybe the most significant passages about Old Testament believers is found in Hebrews 12:1 where we are told there is a cloud of witnesses in heaven surrounding us. When the writer of Hebrews says this, he was referring to the saints who had already died in the Old Testament, which he had already named in Hebrews 11. The invisible spiritual kingdom is the place where the saints or believers of all the ages currently exist.

Both Matthew 24:29-31 and Revelation 19:11-20:6 teach that at the second coming of Christ, the kingdoms of the world will be defeated and a millennial or one-thousand year kingdom will be established. Jesus will be the King ruling over this kingdom. This kingdom is not a new kingdom. It is a continuation of the spiritual kingdom, only then in a visible form. Initially, the citizens of this kingdom will only be believers. That is Jesus’ teaching in Matthew 25:31-46.

Matthew 25 records different parables and teachings by Christ about this millennial kingdom, but verses 31-46 describe the Goat and Sheep Judgment which will occur between the second coming of Christ and the millennial kingdom starts. This judgment must not be confused with the White Throne Judgment described in Revelation 20:11. The Goat and Sheep Judgment determines who enters the millennial kingdom when it first begins. Jesus teaches us that only believers will enter this spiritual kingdom (verses 31-34). Also, notice that Matthew 25:34 says the Father planned this kingdom before the foundation of the world. Verse 32 says that all the surviving people from the Battle of Armageddon of the nations of the world will stand before the Father. Then He will separate the sheep, or believers, from the goats, or unbelievers (v. 32-33). Then in verse 34 we are told the Father only allows the believers into His kingdom. This is the visible form of the spiritual kingdom.

Then the King will say to those on His right, “Come, you who are blessed of My Father, inherit the kingdom prepared for you from the foundation of the world.” Matthew 25:34 (NASB)

1 Corinthians 15:22-24 teaches that at the end of the millennial kingdom Christ will hand this visible form of the spiritual kingdom over to the Father. Then it will take on another form—an eternal and final form or the new heaven and the new earth (Revelation 21:1). In theology this is also called the eternal state (Revelation 21-22).

Questions About The Millennial Kingdom

Now for a short overview of the visible spiritual kingdom, also called the millennial kingdom. Throughout the Old Testament, God repeatedly prophesied of a future kingdom that would exist forever (Genesis 49:10; Numbers 24:17; 2 Samuel 7:16-17; Micah 5:2). Maybe the clearest Old Testament prophecy about this future kingdom is found in 2 Samuel 7:12-16. It states that God promised to give King David a kingdom that would exist forever. The prophecy says that at some point in the future one of king David’s descendants, the Messiah (Jesus Christ) will rule as king forever. This kingdom is a continuation of the Father’s invisible spiritual kingdom, but it will exist in a different form in the future for one thousand years (Revelation 20:4). This visible form of the spiritual kingdom will completely dominate the world after the second coming of Christ and will exist on this fallen earth for one thousand years (Revelation 20:4-6).

Since Jesus has urged us to pray that the Father’s kingdom would come in Matthew 6:10, it is obvious that He was not referring to the existing universal kingdom or the invisible form of the existing spiritual kingdom. Jesus was referring to something new and future. The second question is, “Why will the future millennial kingdom be a continuation of the current invisible spiritual kingdom?” First, Christ will rule as king during the millennial kingdom and it will contain holy angels and the saints of all the ages (Daniel 12:1, 13; Matthew 25:31-46; 1 Corinthians 6:3; 2 Timothy 2:12; Revelation 20:6). Second, the millennial kingdom over which Jesus will rule will not include the evil angels, or any of the unbelievers that are still living at the end of the tribulation. These unbelievers will be sent to hell and never dwell in the kingdom. Third, Isaiah 65:17-25 describes this kingdom as a wonderful place where people will live long, still births will not exist, safety, abundance, and peace will exist among the animal kingdom (Isaiah 65:17-25).

Eternal Form of the Spiritual Kingdom

Pharisees Ask About The Kingdom

We have provided much background information about the spiritual kingdom because our study in Luke 17:20-21 is about this kingdom. It is important for a proper understanding of this passage. Luke 17:20-21 reads as follows,

Before this event occurred, Jesus had just healed ten lepers (Luke 17:11-19). Of the ten lepers who were healed, only one believed in Jesus (Luke 17:19). We pointed out in the last study that when Jesus told the leper, “Your faith has made you well,” the Greek word Jesus used for “well” was sozo, which means “to save.” That is, the one leper who returned to thank Jesus had become a believer in Him. Only one leper was saved from his sins. He had been physically healed and spiritually saved.

Now having been questioned by the Pharisees as to when the kingdom of God was coming . . . Luke 17:20 (NASB)

Kingdom Is In Your Midst

The Greek word that Jesus used for the word “observed” is parateresis. The word referred to astronomical observation. Therefore, it had the sense of “closely watching.” This means Jesus said the coming of the kingdom of God could not be determined by carefully watching for external signs. There would not be astronomical signs.

Therefore, we must ask, “About what kingdom was Jesus speaking?” Jesus’ reply seems to contradict the fact that Jesus will teach later that signs will occur before the second coming of Christ, which will occur just before the visible spiritual kingdom. Why did Jesus say this? The answer is that He referred to the invisible kingdom of God when He answered the Pharisees. The invisible kingdom already existed. There are two reasons why this is the correct conclusion.

The first reason is that when Jesus said the kingdom of God was “in your midst,” He literally said, “in you.” He used two Greek words, “entos su.” The Greek word su means you. The Greek word entos is sometimes translated as “within,” such as in the passage in Matthew 23:26. But a more accurate sense of the word is “within a time period,”[1] or “among you.”[2] Howard Marhsall states,

Jesus is speaking of the presence of the kingdom of God among men . . .[3]

That is, the correct understanding is that Jesus was not referring to the kingdom of God being inside the Pharisees. It was among them. There were individual men and women who were believers, who would go to heaven. In that sense the kingdom was among them.

Because of these two reasons, we understand that the kingdom Jesus was speaking about was the invisible spiritual kingdom. There are no signs that will occur that the kingdom is arriving since it already exists. It has existed since the time of Adam and Eve.

The Pharisees did not understand that the kingdom they were looking for was actually a spiritual kingdom that could only be entered into by a work of the Holy Spirit. That was Jesus’ message to Nicodemus (John 3:4-6). The Holy Spirit had to change their hearts.

Jesus had already illustrated that their hearts needed to be changed in the parable of the Sower of the Seed. Here is Luke 8:12 and 15.

Those beside the road are those who have heard; then the devil comes and takes away the word from their heart, so that they will not believe and be saved . . . But the seed in the good soil, these are the ones who have heard the word in an honest and good heart, and hold it fast, and bear fruit with perseverance. Luke 8:12, 15 (NASB)

Jesus’ point was that with the heart (the mind) a person believes in Christ and is saved. So, the devil works to prevent people from believing in Him. For with the heart, a person believes and is saved. So, Jesus informed them that the kingdom was already present among them. They did not know the kingdom was already present because of their unbelieving hearts.

Did you know that the invisible spiritual kingdom is already present and you can enter it by believing in Jesus? Jesus has said that He did not come to save the righteous but sinners.

I have not come to call the righteous but sinners to repentance. Luke 5:32 (NASB)

Of Him all the prophets bear witness that through His name everyone who believes in Him receives forgiveness of sins. Acts 10:43

Life of Christ
Ten Lepers Healed, Only One Was Saved