Healing of the Blind Man

This study is about an unusual healing. Most of us would call it a miracle. I am sure that the man who gained his eyesight called it a miracle. I wonder how he felt. Do you think that he thought he was just another miracle among so many that Jesus had performed? I wonder! Or, did he feel that Jesus cared about him? In some churches and para-church organizations, people are often just a number when the ministry has the wrong focus. When a ministry is concerned about how many people were contacted, witnessed to, or counseled, people become just a number – just cold facts. We will soon discover that Jesus did not treat this man as a number or a contact that the disciples recorded in their statistics. Jesus could have healed entire crowds of people all at one time, but He did not do that. Instead, He dealt with each person individually. He spent time with them. His compassion was evident. Come! See Jesus! See Jesus heal a blind man who was visually all alone in a world of those who see.

Mark 8:22-26 is the text for our study. Jesus and the disciples have entered the city of Bethsaida. Bethsaida was located on the northeast shore of the Sea of Galilee. Jesus and the disciples had just finished feeding about 4,000 men somewhere along the coast before they returned to the west side of the Sea of Galilee. Then after an encounter with the Pharisees during which they asked Him for a sign to prove that He was the Messiah, Jesus returned to the east side to visit Bethsaida.

And they came to Bethsaida. And they brought a blind man to Jesus and implored Him to touch him. Mark 8:22 (NASB)

Verse 22 reveals that some unidentified group of people brought a blind man to Jesus in the city. Their request was simple – touch him – heal him. The Greek text tells us that they were exhorting or encouraging Him to heal. They must have been afraid that Jesus would not heal the man. Was Jesus busy healing others? Was Jesus eating His lunch, walking or talking with the disciples? Was there a reason they were urging Him to heal the blind man?

Did you notice that the names of the people are not recorded? The Holy Spirit did not record their names. Maybe it is a subtle reminder that we should not seek credit for the wonderful events that occur in ministry. The glory should go to the Lord and not to ourselves. All that is recorded is that these unnamed people had compassion for their friend and not themselves. Do you ever help others in order to receive the praise of others?

Finally, Jesus responded to their compassion for their friend. He reached out and grasped the blind man’s hand. The people who brought the blind man must have been relieved and maybe even smiled at each other. They had been successful.

Taking the blind man by the hand, He brought him out of the village; and after spitting on his eyes and laying His hands on him, He asked him, “Do you see anything?” Mark 8:23 (NASB)

As I read this passage, I rejoice that Jesus did not ask someone else to take care of this blind man. Jesus did not ask for money to be collected before or after the healing. He did not ask for someone from the local Gospel Rescue Mission or some other local ministry to take care of the man. Jesus did not ask him if he had faith for the healing. Jesus was not uninvolved nor did he make up some excuse why He could not help. How often we are quick to give money for a worthy cause and never get involved ourselves. Sometimes our hearts are missing the compassion for others that God wants us to have. No, Jesus took His own hand, reached out and touched the blind man. The man may have been dirty or diseased. Was his faced disfigured from an accident resulting in his blindness? Yet, Jesus touched him.

Then Jesus took the man outside the village, leading him by his hand. Why did Jesus go outside the town? Most likely Jesus wanted to get away from the crowd or some critics inside the town. Then Jesus spit on the man’s eyes. I wonder if the blind man reacted when the warm spit landed on his eyes? A blind man would not see the spit coming nor would he see Jesus reaching out to touch him, unless Jesus warned the man in advance. Then Jesus touched his eyes. The Greek text reveals that Jesus repeatedly asked him, “Do you see anything?” Evidently, the man did not respond the first time and maybe not the second or third time.

Finally, he did respond,

His response reveals that he was not born bind. He would not have known what trees looked like if he had been born blind. He once was able to see. Sometime during his life he became blind through disease, an accident, or a genetic disorder. How many years had he been blind? We do not know. But he must have been anxious to have his eyesight restored.

Then Jesus laid His hands on the man’s eyes again.

Then again He laid His hands on his eyes; and he looked intently and was restored, and began to see everything clearly. And He sent him to his home, saying, “Do not even enter the village.” Mark 8:25-26 (NASB) 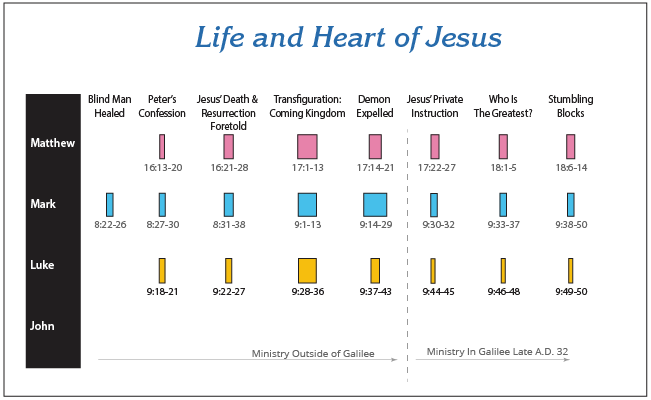 The first word indicates that Jesus enabled the man to mentally see and the second time Jesus repaired his physical eyes. Maybe the man’s brain was damaged and could not process the visual electrical responses from his eyes. If so, Jesus repaired both in succession – his mind and then his physical eyes. This would have been an important event since Mark’s next account is about Peter’s perception or great confession about Jesus Christ. In Mark 8:27-38 we will discover that Jesus will be asking Peter, “Who do you say that I am?” Peter’s perception will be tested. Mark may have wanted to include this account in preparation for what follows. One may see clearly in this world but not see very clearly in reference to spiritual matters. I wonder if the blind man had good spiritual perception? Did he have good perception about Jesus Christ? Did he finally realize that Jesus was his God and Savior? 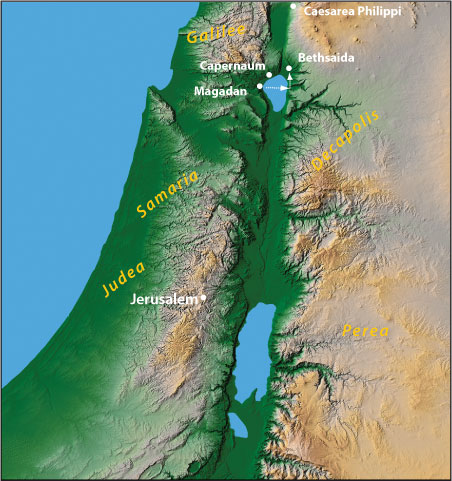 We are like a blind man in a spiritual wilderness without anyone to guide us. We can not see spiritual truth without God’s guidance. We are helpless. If you do not believe in Jesus Christ, you are spiritually blind and need God to guide you to the truth. But if you believe in Jesus – trusting Him for the forgiveness of your sins, you can praise God that you are no longer spiritually blind. Everyone of us needs Jesus’ touch each day in order to understand spiritual truth. I may think I see clearly, but I need the Holy Spirit to help me to spiritually see or understand clearly. 1 Corinthians 2:12-14 tells us that we need the Holy Spirit to teach us. This is a constant need. I need to confess my sins to God directly on a regular basis in order for this to occur.

Before we end our study we need to ask, “Why did Jesus touch the man’s eyes?” He did not need to touch the man. On some occasions He healed people who were a long distance away. So why touch the man’s eyes? Have you ever noticed how often Jesus touched people? He touched children, lepers, the blind, a deaf-mute and others. I have discovered that most people respond positively to a casual touch on the shoulder. Touch communicates concern and compassion. I believe that Jesus touched intentionally in order to communicate His compassion for people. He cared about their physical health and comfort. He cared about each one personally. He loved people, and so He touched them. No one was unimportant to Him.

Sometimes we ignore people. Sometimes we are just too unloving and treat them as numbers in our statistics.

A businessman and his wife were busy to the point of exhaustion. They were committed to each other, their family, their church, their work, their friends. Needing a break, they escaped for a few days of relaxation at an oceanfront hotel. One night a violent storm lashed the beach and sent massive breakers thundering against the shore. The man lay in his bed listening and thinking about his own stormy life of never-ending demands and pressures.

The wind finally died down and shortly before daybreak the man slipped out of bed and took a walk along the beach to see what damage had been done. As he strolled, he saw that the beach was covered with starfish that had been thrown ashore and helplessly stranded by the great waves. Once the morning sun burned through the clouds, the starfish would dry out and die.

Suddenly the man saw an interesting sight. A young boy who had also noticed the plight of the starfish was picking them up, one at a time, and flinging them back into the ocean.

“Why are you doing that?” the man asked the lad as he got close enough to be heard. “Can’t you see that one person will never make a difference – you’ll never be able to get all those starfish back into the water. There are just too many.”

“Yes, that’s true,” the boy sighed as he bent over and picked up another and tossed it back into the water. Then as he watched it sink, he looked at the man, and smiled, and said, “But it sure made a difference to that one.”[1]

The following lyrics of “He Touched Me” are a great reminder of Jesus’ great compassion for all of us.

Shackled by a heavy burden,
‘Neath a load of guilt and shame.
Then the hand of Jesus touched me,
And now I am no longer the same.

Since I met the Blessed Saviour,
Since He cleansed and made me whole,
I will never cease to praise Him!
I’ll shout it while eternity rolls.

He touched me and made me whole.[2]

May God bless you as you show compassion to others and tell others that Jesus Christ died for them in order to forgive their sins. Now that is the spiritual touch . . .

2. William J. Gaither, He Touched Me.