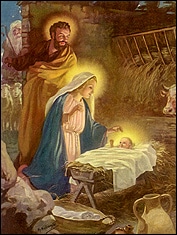 Jesus was not a special baby to the owner of the feed trough in which He was sleeping on the night He was born. There was no room at the inn in Bethlehem. When His parents came looking for a place to stay where His mother could give birth, the owner did not offer the use of his home. In fact, history says that Jesus and His parents were allowed to stay in a cave where the landlord’s animals slept and ate. A cave! Did Jesus notice the odors? Was it clean? We do not know, but it was all that was offered. These teenage parents did their best for Jesus. They used the animals’ feeding trough for His bed and probably used straw for His mattress. No! – the owner was not thinking about Jesus or His parents as being anyone special. To him they were just some travelers looking for a place to sleep.

He did not know Jesus’ parents had been visited by the angel Gabriel (Matthew 1:18-25; Luke 1:26-56) or that the angel had told His parents to name Him Jesus. Surely, the owner did not know Jesus’ name was to be Emmanuel – God with us (Matthew 1:23)! This landlord probably would have wanted to know that Joseph was not Jesus’ actual father. Did he know they were from Nazareth in Galilee or that His parents were descendants of King David? It is obvious that he did not know that this child’s birth would be announced by angels and that a star was going to appear when He was born, otherwise, he would have responded differently. He did not know that shepherds would come to visit the Savior for whom he and so many had long waited. He did not know that the real reason Jesus’ parents had come to Bethlehem was not just to register for Quirinius’ census but for Jesus to be born in Bethlehem as the prophets had predicted.

AND YOU, BETHLEHEM, LAND OF JUDAH, ARE BY NO MEANS LEAST AMONG THE LEADERS OF JUDAH; FOR OUT OF YOU SHALL COME FORTH A RULER, WHO WILL SHEPHERD MY PEOPLE ISRAEL.’ Matthew 2:6 (NASB)

The owner probably would not have believed that He was born of the Holy Spirit (Luke 1:35) or that His mother was a virgin as predicted by the prophet Isaiah.

Therefore the Lord Himself will give you a sign: Behold, a virgin will be with child and bear a son, and she will call His name Immanuel. Isaiah 7:14 (NASB)

After the visit of the shepherds, did the owner have a change of heart? History never mentions his name, but history does mention the baby’s name – Jesus. The angel had said He was the “Savior, who is Christ the Lord” (Luke 2:11).

The landlord did not know there were some men, wise men or magi, who knew about Jesus’ birth. Otherwise, he would have eagerly offered the royal rooms to Jesus and His parents. The magi had seen His miracle star in the sky – an unusual star that pointed to Jesus. They came from the east to visit Him about two years after His birth. The landlord could have visited Jesus easily, but these magi had to travel a great distance. Apparently the star could no longer be seen when they arrived in Jerusalem, but their question was not about the star.

Now after Jesus was born in Bethlehem of Judea in the days of Herod the king, behold, magi from the east arrived in Jerusalem, saying, “Where is He who has been born King of the Jews? For we saw His star in the east, and have come to worship Him.” And when Herod the king heard it, he was troubled, and all Jerusalem with him. Matthew 2:1-3 (NASB)

They came looking for “He who has been born King of the Jews.”

How did these men know the “King of the Jews” was born? Why did they connect the star with the birth of Jesus? The answer to these questions is given by the fact that they came from the east, a place where many Jews had gone into exile some 600 years earlier. They came from Persia or from Babylon. Their names are of Iranian origin. These men had come from a background of involvement in astrology and the occult. They were priests by birth and their forefathers had possessed great political power in Babylon, Media, and Persia. Their forefathers knew of a Jew by the name of Daniel. He had served the great Nebuchadnezzar and other kings in that region. Daniel had predicted that Messiah the Prince would die in 33 A.D., and if Messiah was to die, he would need to be born first. If Daniel’s predictions were to come true, this was the period of time for fulfillment. One hundred years earlier would have been too early, and sometime after 33 A.D. would be too late for fulfillment. No one else in history could qualify as the Messiah. Messiah had to die in 33 A.D. This was the time; and so when they saw this unusual star, they responded as smart men who must have known Daniel’s prophecy. They concluded Messiah the prince was to be born. So they came looking for the “King of the Jews.”

These were wealthy, powerful men. They would not have traveled that distance alone. More than likely there were many magi, not just three, and they would have been traveling in oriental pomp and with a cavalry escort for protection against thieves and a Roman military. Jerusalem and Herod with his army of Roman soldiers would not have been afraid of just three lonely rich men. Jerusalem would have had tens of thousands if not hundreds of thousands of people. Three men would not have worried anyone unless they came with a military escort.

Herod’s response was to ask the Jewish priests and scribes where the Messiah was to be born. Herod discovered the Jewish Messiah was to be born in Bethlehem, about 5 miles south of Jerusalem. When Herod told them where they could find the “King of the Jews,” he asked them to come back and tell him where they located him. He was worried. He must have been worried about a competitor, another king, and the reaction of these men.

And gathering together all the chief priests and scribes of the people, he began to inquire of them where the Christ was to be born. And they said to him, “In Bethlehem of Judea, for so it has been written by the prophet, ‘AND YOU, BETHLEHEM, LAND OF JUDAH, ARE BY NO MEANS LEAST AMONG THE LEADERS OF JUDAH; FOR OUT OF YOU SHALL COME FORTH A RULER, WHO WILL SHEPHERD MY PEOPLE ISRAEL.'” Then Herod secretly called the magi, and ascertained from them the time the star appeared. And he sent them to Bethlehem, and said, “Go and make careful search for the Child; and when you have found Him, report to me, that I too may come and worship Him.” And having heard the king, they went their way; and lo, the star, which they had seen in the east, went on before them, until it came and stood over where the Child was. And when they saw the star, they rejoiced exceedingly with great joy. Matthew 2:4-10 (NASB)

After they left, the magi saw the star again. It moved in the sky. These were experienced astronomers. This was not a bright Jupiter or an alignment of celestial bodies. This thing moved. No star moves forward as a guide. This was not even a meteor. Meteors did not move to a location and stop as a pointer. This was an unbelievable event. That is why they followed.

The Prince of Peace

When they arrived, Jesus and His parents were no longer in the cave and Jesus was no longer in the feeding trough. Where was the owner? We do not know and neither scripture or history tells us. But these famous, wealthy, powerful men came to worship – men that scripture remembers and whom legends have been written about.

And they came into the house and saw the Child with Mary His mother; and they fell down and worshiped Him; and opening their treasures they presented to Him gifts of gold and frankincense and myrrh. Matthew 2:11 (NASB)

They brought three gifts. This is why legend says there were only three men, but as explained earlier this is not likely. These men came for one purpose. They came to worship – to worship the one Daniel called “Messiah the Prince” (Daniel 9:25), and the one Isaiah called the “Prince of Peace.”

For a child will be born to us, a son will be given to us; And the government will rest on His shoulders; And His name will be called Wonderful Counselor, Mighty God, Eternal Father, Prince of Peace. Isaiah 9:6 (NASB)

Jesus was the fulfillment of prophecy. The visit of the wise men is the most significant proof of the miraculous birth of Christ. It is proof that Jesus was the fulfillment of true, actual prophecy. We have seen two types of men – the owner of the feeding trough who apparently did not care and men who traveled a long distance to find a baby and then bowed down on their knees to Him. These men bowed down to a King, to the Messiah, to the Savior of the world, to God. They worshiped Him. God calls each of us to come and bow down this Christmas to not just any baby but to our God. Christmas is about the birth of a man who was also God. God calls us to come and bow down – to the Prince of Peace – to the Savior of the world!

Christmas Story - Biblical Accounts
Mary, The Favored One!
The Ancient Messiah
The Gift – The Virgin Birth of Christ
The Gift – The Son of God
Where Did Jesus Come From?
Our Shepherd-King
Did You Forget God the Father At Christmas?