Historian William H. Prescott gave the following account of an incident in the career of General Francisco Pizarro, Spanish invader of Peru. At a crisis moment Pizarro drew his sword and traced a line with it on the sand from East to West. Then, turning toward the South, “Friends and comrades,” he said, “on that side are toil, hunger, nakedness, the drenching storm, desertion, and death; on this side ease and pleasure. There lies Peru with its riches; here, Panama and its poverty. Choose, each man, what best becomes a brave Castilian. For my part, I go to the South. Most decisions in life are easy to make.” Pizarro called them to both glory and poverty. Decisions between life and discomfort, pain or poverty are often hard to make. 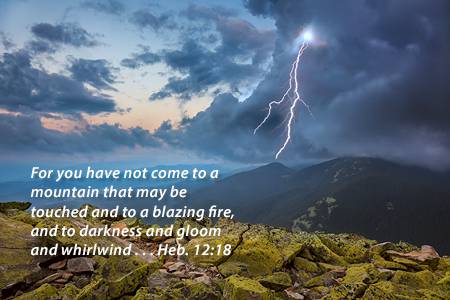 The call of Hebrews has been to go “South.” Go straight to Jesus! Hebrews was sent to some men and women who were disappointed, discouraged, and disillusioned with Jesus because of their suffering. We are no different than they were. It is easy to lose perspective when the pain of suffering is strong. So God explained the reason why they were suffering and called them to endure their trials. God was working so that they might “share in” His holiness (Hebrews 12:10). They needed to be willing to suffer, to not seek to escape, and if they were not Christians to come all the way and to believe or depend on only Jesus.

Coming to Jesus would not be a mistake. But going back to Judaism would be a huge mistake. So the Holy Spirit encourages them with.

For you have not come to a mountain that may be touched and to a blazing fire, and to darkness and gloom and whirlwind, and to the blast of a trumpet and the sound of words which sound was such that those who heard begged that no further word should be spoken to them. For they could not bear the command, “IF EVEN A BEAST TOUCHES THE MOUNTAIN, IT WILL BE STONED.” And so terrible was the sight, that Moses said, “I AM FULL OF FEAR AND TREMBLING.” Hebrews 12:18-21 (NASB)

These verses are reminders to them of the time Moses was given the Ten Commandments. As we have seen many times already in Hebrews, this would have had special meaning to a Jew in Jesus’ time. Their ancestors were fearful of Mt. Sinai for several reasons, including having been warned not to touch it. They had the choice to touch the mountain and die or not to touch it and live – to go North or South. The Greek word for “touch” means “to grope after” or ‘feeling for.” The mountain was so dark they would have had to grope for it in order to touch it. God is reminding them of this fearful time. Here is the event in Moses’ words.

No hand shall touch him, but he shall surely be stoned or shot through; whether beast or man, he shall not live . . . So it came about on the third day, when it was morning, that there were thunder and lightning flashes and a thick cloud upon the mountain and a very loud trumpet sound, so that all the people who were in the camp trembled . . . Now Mount Sinai was all in smoke because the LORD descended upon it in fire; and its smoke ascended like the smoke of a furnace, and the whole mountain quaked violently. When the sound of the trumpet grew louder and louder, Moses spoke and God answered him with thunder. Exodus 19:13, 16, 18-19 (NASB)

As sinners each one of us was afraid of God before our sins were forgiven. But Jesus changed that. With Jesus we do not need to be afraid. With Jesus we can touch Mt. Zion and live in heaven some day. We can come to God and not be afraid. That is the message He now sends to the readers.

But you have come to Mount Zion and to the city of the living God, the heavenly Jerusalem, and to myriads of angels, to the general assembly and church of the first-born who are enrolled in heaven, and to God, the Judge of all, and to the spirits of righteous men made perfect, and to Jesus, the mediator of a new covenant, and to the sprinkled blood, which speaks better than the blood of Abel. Hebrews 12:22-24 (NASB)

When the Ten Commandments were given at Mt. Sinai, 3,000 Jews died because of sin. But when the Holy Spirit came on Pentecost, God rescued 3,000 souls from the penalty of being sinners. The Law brought death, but God’s love has brought life – eternal life! Eternal life is given to us when our sins are forgiven. That happens if we believe or trust Jesus to forgive our sins.

Those who do believe have chosen to “go South” and they receive seven things: 1) the heavenly city – Jerusalem, 2) myriads of angels, 3) assembly of the first-born, 4) God, 5) spirits of righteous men, 6) Jesus and 7) Jesus’ blood.

Even as a young adult I thought eternal life was life that lasted forever as opposed to life that stopped at death. But then I discovered that everyone lives eternally (Matt. 25:46) either in hell or heaven. Eternal life is life with God that begins at the point of salvation and goes on forever and ever. Every Christian will live with Him forever in the heavenly city called Jerusalem. We will see angels, the patriarchs (first-born enrolled in heaven), other Christians, God and our Lord Jesus.

Do Not Make An Excuse

I wonder how many excuses General Francisco Pizarro heard from his men? I am sure some of his men chose the North. But God is not calling us to go South but to be at peace with Him and to live in a heavenly city. Yet, there is reason to fear Him if we make excuses!

See to it that you do not refuse Him who is speaking. For if those did not escape when they refused him who warned them on earth, much less shall we escape who turn away from Him who warns from heaven. Hebrews 12:25 (NASB)

The Greek word for “refuse” means “to refuse by begging-off,” or “excusing one’s self.” He is warning us against walking away from Him! If there was any doubt in our minds that God was talking to some who were not Christians, this passage makes it clear. Some were not Christians! Even today there are non-Christians who act, look and speak as Christians but are not. They will not deceive God. There is coming a time when God will destroy the universe and build a new city.

And His voice shook the earth then, but now He has promised, saying, “YET ONCE MORE I WILL SHAKE NOT ONLY THE EARTH, BUT ALSO THE HEAVEN.” And this expression, “Yet once more,” denotes the removing of those things which can be shaken, as of created things, in order that those things which cannot be shaken may remain.  Hebrews 12:26-27(NASB)

Every city will be destroyed and only His city will be left. What a picture! There is only one city left. A priest was preaching to his congregation concerning heaven and hell. To emphasize the difference between the two, he asked that all who wanted to go to heaven stand up with him. All the congregation rose. The congregation then sat down. He then asked that all who wanted to go to hell stand up with him. No one rose. For full dramatic impact, he waited for several seconds before continuing. The silence was broken by a small boy who slowly rose to his feet. The astonished priest spoke to the boy, “Surely son, you do not want to go hell.” The boy answered, “Maybe not sir, but I just couldn’t stand the sight of you standing there all alone.” Will you go South or will you go North?

A story is told of a woman who said, “My husband and I have a very happy marriage. There’s nothing I wouldn’t do for him, there’s nothing he wouldn’t do for me – and that’s the way we go through life – doing nothing for each other.” But that is not true of God. He sent Jesus to die for us, to die so that He could forgive our sins. There is nothing we have to do but to honestly, seriously believe that Jesus is God, He died to forgive our sins, and He returned to life. That is all!

God is calling each of us to be at peace with Him! There is nothing to do, but once we are saved then He asks us to be willing to serve Him.

Therefore, since we receive a kingdom which cannot be shaken, let us show gratitude, by which we may offer to God an acceptable service with reverence and awe; for our God is a consuming fire. Hebrews 12:28-29 (NASB)

Once we have turned and gone South, He then calls us to action – gratefully serving Him in holiness and awe.