Life! In a “Peanuts” comic strip, there was a conversation between Lucy and Charlie Brown. Lucy said that life is like a chair on a cruise ship. Some place the chair so they can see where they are going, some place it so they can see where they have been. Some place it so they can see where they are at present. To which Charlie Brown replied, “I can’t even get mine unfolded.” We can laugh at his mistake, but yet it is true that many of us are so busy just unfolding the present life. The psychologist William Moulton Marston asked three thousand people the question, “What do you live for?” He discovered that 94 percent were simply enduring the present and looking for a better future – the first job, birth of a child, waiting for the child to grow up, for the child to leave home, for retirement, for a vacation, to get well, and waiting for something else. They were all looking forward because the present life felt like a folded chair – useless, weary and without rest.

The Promise of Rest

Abraham had a bright future. God had made several promises to him: he would receive blessing, have a great name, be the father of a multitude of nations, have all the nations of the earth blessed through his seed, Christ, and inherit the land of Canaan – the promised land (Genesis 12:1-3; 17:1-8; 22:17). Abraham’s future was wonderful. But God also revealed that his children would suffer in the land of Egypt (Genesis 15:13) for 400 years.

Exodus tells us the Israelites did in fact suffer. They were slaves who were forced to build pyramids and other Egyptian wonders. As God had promised Abraham, God raised up Moses, the deliverer of the Jewish people. God performed miracles through him and Aaron and beat the Egyptians into a temporary submission. After the Israelites had left, the Egyptian army pursued them in one last, miserable, unsuccessful attempt. The Israelites were headed to the land promised to Abraham – the Promised Land – the land of Canaan. There they would find rest from their oppressors – a land of their own. 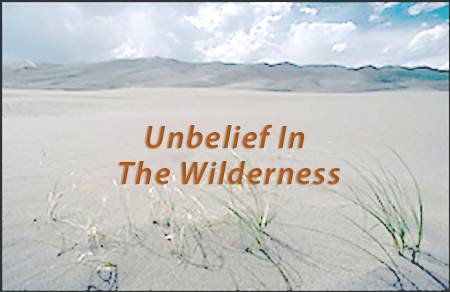 The Israelites saw God’s miracles, one miracle after another miracle. Yet, they complained about no water, no food, being ignored by God, giants in the land, and who would be the leader. They never did unfold their “chair,” but yet they had their eyes fixed on the future. But if we could have asked them why they were wandering in the wilderness, they would have said, “the Promised Land.” Does it sound like us? We become so occupied with our present, everyday problems that we forget why we are still walking in this wilderness called earth. We seldom remember we are going to be with Jesus.

The Israelites considered the Promised Land to be a place of rest. This desire for rest occurs again and again in Deuteronomy. Listen to Moses speaking,

Other passages such as Deuteronomy 3:18-28 and Deuteronomy 25:19 send the same message. They considered the Promised Land a place of rest. Yet, many failed to enter the Promised Land, the place of rest, because they did not believe or trust in God. God told them they would die because they did not believe in Him. Their hopes and dreams were gone! What a disappointment! They died in the wilderness. Moses and Aaron died, too, but for other reasons. It was those who were under twenty years of age (Numbers 32:11-12) with their hopes and dreams who entered the Promised Land. Joshua led them in, and here is what they found.

And now the LORD your God has given rest to your brothers, as He spoke to them . . . which Moses the servant of the LORD gave you beyond the Jordan. Joshua 22:4 (NASB)

The Israelites found their earthly rest.

We found in Hebrews 3:7-19 that the Holy Spirit used Psalm 95:7-11 to warn the readers to believe in Jesus. He reminded the readers that the Israelites in the wilderness did not enter the Promised Land because of unbelief. That was true. Unbelief was disobedience and resulted in death.

Therefore, let us fear lest, while a promise remains of entering His rest, any one of you should seem to have come short of it. For indeed we have had good news preached to us, just as they also; but the word they heard did not profit them, because it was not united by faith in those who heard. For we who have believed enter that rest, just as He has said, “AS I SWORE IN MY WRATH, THEY SHALL NOT ENTER MY REST” . . .” Hebrews 4:1-3 (NASB) 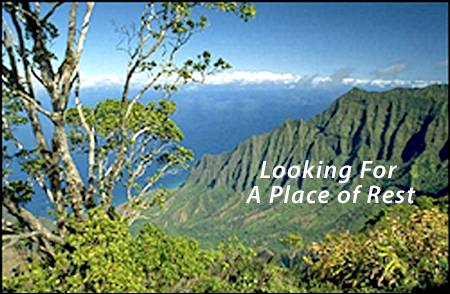 The Holy Spirit is making a strong point. We need to do more than listen; we need to believe Jesus in order to enter rest. The unbelieving, unfaithful Israelites were looking for rest. Are you? They did not enter rest.

. . . although His works were finished from the foundation of the world. For He has thus said somewhere concerning the seventh day, “AND GOD RESTED ON THE SEVENTH DAY FROM ALL HIS WORKS”; and again in this passage, “THEY SHALL NOT ENTER MY REST.” Hebrews 4:3-5 (NASB)

Since therefore it remains for some to enter it, and those who formerly had good news preached to them failed to enter because of disobedience, He again fixes a certain day, “Today,” saying through David after so long a time just as has been said before, “TODAY IF YOU HEAR HIS VOICE, DO NOT HARDEN YOUR HEARTS.” Hebrews 4:6-7 (NASB)

The Holy Spirit does it again. He talks about those who did not believe as being unable to enter rest and then implies they can enter rest “Today.” How can that be since they are dead? Again, He is shifting from earthly to spiritual truth. The shocking statement is the next verse.

For if Joshua had given them rest, He would not have spoken of another day after that. Hebrews 4:8 (NASB)

Upon reading this verse if we were Jews, we would probably respond with, “But the Israelites did enter their rest, the Promised Land, and Joshua did give them rest! The book of Joshua says so.” But that is the clue to the real message. Did you notice what kind of rest the Holy Spirit has been talking about? “My Rest!” He did not say “their rest” but “My Rest” and “His Rest.” The unbelieving Israelites who died in the wilderness symbolize those who do not enter heaven but hell. Those who entered the Promised Land symbolize those who enter heaven because they believe. That is why King David hundreds of years later called us to enter God’s rest. We have a choice – the wilderness or the Promised Land. We can enter heaven by believing or we can stay in the wilderness or hell because of our unbelief.

The Old Testament saints were waiting for Jesus, but those who did not believe in the wilderness would never get to the heaven. For us who have finally believed or trusted in Jesus Christ to forgive our sins, we can now rest!

There remains therefore a Sabbath rest for the people of God. For the one who has entered His rest has himself also rested from his works, as God did from His. Hebrews 4:9-10 (NASB)

Notice, we can rest as God did! The Sabbath was a day of doing nothing. God uses a unique Greek word here: “Sabbath rest.” It only occurs in Hebrews. It means once we believe, we have entered into rest and there is nothing more to do. In fact, we are to rest – to stop! We are to stop trying to gain His favor. We are not to work to gain His favor. Just believe! Just trust Him!

If we do not enter rest but keep trying to unfold our “chair,” we will face judgment and punishment.

Let us therefore be diligent to enter that rest, lest anyone fall through following the same example of disobedience. For the word of God is living and active and sharper than any two-edged sword, and piercing as far as the division of soul and spirit, of both joints and marrow, and able to judge the thoughts and intentions of the heart. And there is no creature hidden from His sight, but all things are open and laid bare to the eyes of Him with whom we have to do. Hebrews 4:11-13 (NASB)

God will know what we really believe. We cannot escape His eyes. He knows your thoughts, motives and attitude – the real you!

And there is salvation in no one else; for there is no other name under heaven that has been given among men, by which we must be saved. Acts 4:12 (NASB)

Are you trying to gain His favor in order to enter heaven? If so, stop! God calls you to trust in Jesus today and to rest from your efforts.

There is a fictitious story told about a time when Satan held a strategy session for stopping men and women from believing in Jesus. “What shall we do?” asked Satan. A daring demon stood and shouted, “I have it! I know what we can do! We can tell men that there is no life after death, that they die like animals.” Satan’s face fell as he answered, “It will never work. Man is not ignorant; even atheists admit at times they sense there is a tomorrow after death.”

Another demon spoke, “What about saying there is no God or if there ever was He is dead – even if He did create the universe.” Satan replied in dismay, “That won’t work either; most of them know that there is a God, even though they don’t seek Him.”

Other ideas were suggested and then finally one demon burst out, “I have it! I have it! I’ve got it now! Go tell them that God is real and the Bible is God’s Word. Tell them that Jesus Christ is God who forgives their sins when they believe in Him.” The crowd of demons were surprised and immediately thought it was a bad idea. Then the demon added, “Then tell them that this is not the best time to believe in Jesus. They can do it later. Help them make excuses for waiting like burying their father, making more money, it will be embarrassing, or maybe they are sick.” The demons danced in delight. They did have a plan!

TODAY IF YOU HEAR HIS VOICE, DO NOT HARDEN YOUR HEARTS. Hebrews 4:7 (NASB)