One Sunday an evangelist came to our church when I was a teenager. He came to challenge us about our relationship to Jesus – our souls and our commitment. Our pastor had evangelists come to the church almost every year. The Holy Spirit had used one of them to draw me to Jesus. As a teenager most messages seemed boring, but this one had my attention. The Holy Spirit was using his words in my life. The speaker was calling us to serve the Lord in ministry as an adult. It was near the end of the service when he asked us to express our feelings about Jesus. A number of people shared how special Jesus was to them and after awhile a young man raised his hand and said, “Jesus is faithful.” The evangelists stopped. He looked at him and said, “Now that is the mark of a pastor.” Faithfulness is the mark of believing men and women whom God has greatly used. Men and women who believe in Jesus and who are faithful to Jesus!

What Kind of Faith

Faith is the mark of those who are involved in effective ministry for Jesus. But we must not forget that faith is how we start as a Christian, and it is the mark of one who continues to live the God-Man Christian life. Many view Christianity as a social club. Membership on the church rolls is all that is required. Getting people involved in doing something in the church is all that is required to keep them. That is the new mark of faithfulness for some – involvement in the church!

In Hebrews 3:7 the Holy Spirit quotes Psalm 95:7-11 to make the point that true Christians are those who have a pattern of life that is marked by belief, trust, and dependence in God.

For He is our God, And we are the people of His pasture, and the sheep of His hand. Today, if you would hear His voice, do not harden your hearts, as at Meribah, As in the day of Massah in the wilderness; “When your fathers tested Me, They tried Me, though they had seen My work. “For forty years I loathed that generation, And said they are a people who err in their heart, And they do not know My ways. “Therefore I swore in My anger, Truly they shall not enter into My rest.” Psalm 95:7-11 (NASB)

This passage is talking about the Israelites’ continued pattern of sinning during the wilderness journey from Egypt to the Promised Land. They had seen God’s miracles – plagues on Egypt, the crossing of the Red Sea, drowning of the Egyptian army, manna from heaven, water from rocks, clouds of smoke and fire, and so forth. Yet they did not believe. They had seen God’s miracles – “My works” – for forty years. God says they always went astray. They did not know God; yet they had seen God’s wonders. Should we be surprised when men and women do not believe? Miracles and wonders may cause people to believe, but there is no guarantee. Jesus said,

Woe to you, Chorazin! Woe to you, Bethsaida! For if the miracles had occurred in Tyre and Sidon which occurred in you, they would have repented long ago in sackcloth and ashes. Matthew 11:21 (NASB)

Most of Israel did not believe. The pattern of life for most of them was unbelief.

Take care, brethren, lest there should be in any one of you an evil, unbelieving heart, in falling away from the living God. But encourage one another day after day, as long as it is still called “Today,” lest any one of you be hardened by the deceitfulness of sin. Hebrews 3:12-13 (NASB)

They saw God’s wonders. They “tasted” God’s grace and goodness. God was good to them, but they still did not believe. 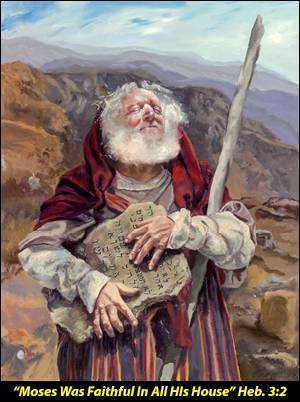 So God sends these Hebrew readers a warning,

For we have become partakers of Christ, if we hold fast the beginning of our assurance firm until the end; while it is said, “TODAY IF YOU HEAR HIS VOICE, DO NOT HARDEN YOUR HEARTS, AS WHEN THEY PROVOKED ME.” For who provoked Him when they had heard? Indeed, did not all those who came out of Egypt led by Moses? And with whom was He angry for forty years? Was it not with those who sinned, whose bodies fell in the wilderness? Hebrews 3:14-17 (NASB)

The message is clear. Some of the readers of this letter had never believed. So the Holy Spirit reminds them of the example of the Israelites. They never did believe – forty years of unbelief. For forty years they saw miracles and they still did not believe. They died in the wilderness as unbelievers.

It is revealing that the Holy Spirit did not mention Moses’ unfaithfulness. He focused on the unbelief of the people for whom Moses was a shepherd. At the start of this chapter, God used Moses as an example of faithfulness. Later he will remind us that by faith Moses left all that Egypt could offer him to live for Christ (Hebrews 11:24-26). Moses was faithful to God in his care for Israel (Numbers 12:7).

But scripture also reveals that Moses did fail God. At one point, as a shepherd over Israel, he was unfaithful. In Numbers 20:1-13 we read that the Israelites had come to the wilderness of Zin. They were in Meribah. This was their second visit to this place (the first visit is recorded in Exodus 17:1-7). Again there was no water. So they complained. This made Moses angry (Psalm 106:32-33). Moses and Aaron went to the Lord and He told Moses to speak to the rock this time (Numbers 20:8), but Moses was angry and struck the rock twice. How did God respond? God decided that neither Moses nor Aaron would enter the Promised Land for which they had waited almost 40 years. Their hopes and dreams of entering the Promised Land were over.

But the LORD said to Moses and Aaron, “Because you have not believed Me, to treat Me as holy in the sight of the sons of Israel, therefore you shall not bring this assembly into the land which I have given them.” Numbers 20:12 (NASB)

What was Moses’ sin against God? Deuteronomy 32:48-52 says that he “broke faith” with God. The Hebrew word for “broke faith” was often used to speak of a wife being unfaithful to her husband. Moses had sinned by being unfaithful, so he was not able to enter the Promised Land. His ministry came to an end while he was still active and alive without health problems (Deuteronomy 35:5-7). God ended his ministry because he was unfaithful.

And to whom did He swear that they should not enter His rest, but to those who were disobedient? And so we see that they were not able to enter because of unbelief. Heb. 3:18-19 (NASB)

This is the second warning in the book of Hebrews. It is a serious one. God is warning us to believe. The Israelites did not believe in God and they did not escape. They thought they were okay, but most of them died in the wilderness. They will live in eternal torment the rest of their lives because they never believed. God says, “Today is the day to believe.” If you are struggling with believing that Jesus is God and that Jesus died to forgive your sins, then talk to God. Ask Him to help you believe that the man Jesus Christ is God and that only Jesus can and will forgive your sins. Today is the day to believe. Do not wait!

The evangelist that Sunday morning said the mark of a pastor was faithfulness. He was right! The mark of a real Christian is belief in Jesus – a supernatural being – our God, Creator and Savior. He was man and God. He died to forgive our sins.

History records that Bishop Hopper was condemned to be burned for his faith in Gloucester during Queen Mary’s reign. A man approached the bishop to encourage him to recant. The man is reported to have said, “Life is sweeter, and death is bitter.” But Hooper replied, “The death to come is more bitter, and the life to come more sweet. I am come here to end this life, and suffer death, because I will not deny the truth I have formerly taught you.” When he was brought to the stake, a box with a pardon from the queen was set before him. The determined martyr cried out, “If you love my soul, away with it! If you love my soul, away with it!”

Jesus calls us to believe in Him and then He calls us to remain faithful like Moses and like Himself!