Marks of a Mature Christian

What is your definition of maturity? One magazine has defined maturity as being “able to carry money without spending it; to be able to bear an injustice without retaliating; to be able to keep on the job until it is finished; to be able to do one’s duty even when one is not watched; and to be able to accept criticism without letting it whip you up” (The Uplift). Someone else has said it this way, “Smart people speak from experience – smarter people from experience, don’t speak.” While there is wisdom in these quotes, they do not define Christian maturity. Our study looks at the indicators, measures or marks of a mature Christian. 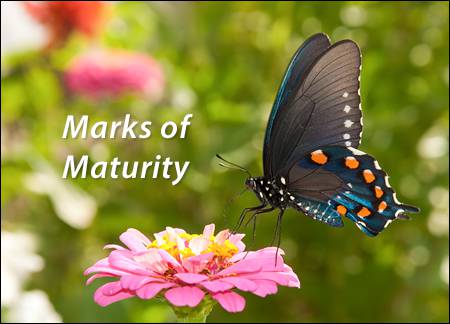 But whoever has the world’s goods, and beholds his brother in need and closes his heart against him, how does the love of God abide in him? Little children, let us not love with word or with tongue, but in deed and truth. 1 John 3:17-19 (NASB)

Mature Christians also live by faith (Hebrews 10:38) with their eyes fixed on Jesus. The best way to pick up this mark is by carefully selecting an older Christian to mimic (Hebrews 13:7). This is not just any person. Hebrews tells us that this person must be one who has taught the Word of Truth and who is worthy of being followed. This requires careful evaluation over time. This is not a quick decision. It must be obvious that this person has trusted God, obeyed God, and endured suffering for Jesus. This person cannot be a young person since Hebrews 13:7 implies that the person is an older man or woman, and may even be dead. At this point someone may say, “But times are different now. Younger people have different needs and we need to minister to them accordingly.” But that is not the message of this verse nor is it the message of the next verse.

Jesus Christ is the same yesterday and today, yes and forever. Hebrews 13:8 (NASB)

Recently, I heard a teacher refer to that “old fashioned teaching” and say that it should be thrown out. Then he gave his own insights, rejected the truth taught in the scriptures, and ended up slandering God. Yes, he had a new teaching, but it was not biblical.

Do you think the old fashioned faith needs to be updated to modern times? If so, you are running towards trouble. It appears from the next verse that some of the readers of Hebrews were struggling with the same issue.

Do not be carried away by varied and strange teachings; for it is good for the heart to be strengthened by grace, not by foods, through which those who were thus occupied were not benefited. Hebrews 13:9 (NASB)

A few years ago I read a book in which the author said that the apostle Paul was not completely honest about God’s view of the role of husbands and wives. He claimed that God “hid some truth” because He feared the Jews and Greeks would reject Christianity if the complete truth were revealed. This person went on to say that now we know the truth and the old view of the roles of men and women can be rejected. The question we must ask is, “How did he discover that God was not completely truthful,” if it is not revealed in scripture? We are not free to find new truth in the white spaces in the Bible. His conclusion was wrong. Biblical truth does not change with time. The mark of a spiritually mature Christian is that of one who has an unchanging faith and holds on to God’s unchanging truth.

The next mark of a mature Christian is the same mark of the great men and women of faith in Hebrews 11 – a willingness to suffer for Jesus.

We have an altar, from which those who serve the tabernacle have no right to eat. For the bodies of those animals whose blood is brought into the holy place by the high priest as an offering for sin, are burned outside the camp. Therefore Jesus also, that He might sanctify the people through His own blood, suffered outside the gate. Hence, let us go out to Him outside the camp, bearing His reproach. For here we do not have a lasting city, but we are seeking the city which is to come. Hebrews 13:10-14 (NASB)

The altar on which animals were sacrificed by the Jewish priests was located in the tabernacle during Israel’s wandering in the desert, and then later in the temple in Jerusalem. Usually the priests could eat what was left of the animal sacrifice, but on the Day of Atonement the sin offering had to be taken outside and burned.

When Jesus died on the cross, He died outside the walls of the city of Jerusalem. When Jesus died, He suffered outside as our sin offering. Yes, we have an altar. It is the cross on which Jesus died. Therefore, the Holy Spirit calls us to go outside to Jesus. He also asks us to be willing to suffer public humiliation, rebuke, and insults because we follow Jesus. Another mark of a mature Christian is a willingness to suffer for Jesus just like the saints in Hebrews 11.

The Holy Spirit gives us another mark of a mature Christian. It is a willingness to sacrifice ourselves.

Through Him then, let us continually offer up a sacrifice of praise to God, that is, the fruit of lips that give thanks to His name. And do not neglect doing good and sharing; for with such sacrifices God is pleased. Hebrews 13:15-16 (NASB)

Do you find it difficult to thank God for what He has done for you? The answer is yes if you find that you forget to thank Him or find it hard to admit that only He can provide for you. To thank Him that you are nothing and that He provides everything is sacrifice. A mature Christian understands that everything is a gift from God.

Unless the LORD builds the house, They labor in vain who build it; Unless the LORD guards the city, The watchman keeps awake in vain. Psalm 127:1 (NASB)

There is no room here for “rights” but only for “thankfulness.”

The Holy Spirit’s next mark of a mature Christian is willingness to submit to leadership.

Obey your leaders, and submit to them; for they keep watch over your souls, as those who will give an account. Let them do this with joy and not with grief, for this would be unprofitable for you. Hebrews 13:17 (NASB)

This one is often misunderstood and abused. There are two key words we need to look at”obey” and “submit.” The Greek word for “obey” is peitho which means “to be persuaded.” It is the opposite of being forced. The Greek word for “submit” is hpeiko which means “to yield” or “to give way.” When we put it all together, the passage is talking about being persuaded of the truth and yielding to leaders. The passage has the idea of not fighting with our leaders but submitting to their teaching and their spiritual guidance. This is necessary for the health of the local church.

But there are times when we should not be cooperative. This is explained by the word, “watch,” which comes from the Greek word agrupeno. It is a combination of two Greek words which mean “to search” and “sleep.” Taken together they mean ‘to search for sleep,” “to be sleepless,” or “to be so constantly on guard.” Did you notice that the Holy Spirit has assumed that the leadership team is sleeplessly watching out for you? When the Holy Spirit calls you to obey and submit, He assumes that the leaders are sacrificing themselves for you. A pastor once told me that when he started work in the morning he “put on his pastoral hat.” Now I reacted to the phrase “put on his pastoral hat.” He was not a sleepless leader eagerly watching over souls. A mature Christian submits to sleepless spiritual oversight.

The final mark of a mature Christian is one who prays for others.

Pray for us, for we are sure that we have a good conscience, desiring to conduct ourselves honorably in all things. And I urge you all the more to do this, that I may be restored to you the sooner. Hebrews 13:18-19 (NASB)

We are called to a life of prayer not just for ourselves but for others, as well. Prayer is a wonderful time to offer the sacrifice of praise to God and to lovingly support others. Prayer is an expression of love for others.

Now the God of peace, who brought up from the dead the great Shepherd of the sheep through the blood of the eternal covenant, even Jesus our Lord, equip you in every good thing to do His will, working in us that which is pleasing in His sight, through Jesus Christ, to whom be the glory forever and ever. Amen. Hebrews 13:20-21 (NASB)

Dr. J. Vernon McGee summarizes the purpose of the book of Hebrews with,

We have been told, “Let us go on to perfection.” He means for us to go on to maturation, to being full-grown children of God. It is marvelous to admire a little baby in the crib, but if you come back in twenty years and he/she is still lying there saying, “Da-da-da,” something is radically wrong. There are many saints who need to come to maturation, to grow up, and the Epistle of Hebrews will help them to do that.