Every day we get ready to do something before we actually do it. Each morning we wake-up, for example, and get ready for the day. Some of us brush our hair (if we have hair). Some of us may clean our teeth (if we have teeth). We decide what clothes to wear. We go through the preparation process every day. If we take a trip somewhere, we make plans in advance. We decide where we will stay. We pack our bags and we plan how we are going to get there. When a house is built, the foundation of the house is prepared before the house is actually built. This process is repeated day after day. We prepare and then do it. We lay the foundation and then build. That is what the author of Hebrews has been doing. He has been laying the foundation for his main point through the first six chapters of Hebrews. He has been laying the foundation in preparation for his message in chapters seven and eight. This study finishes the foundation.

The Holy Spirit has warned the readers of Hebrews to listen to Jesus (Hebrews 2:1-4), to believe in Jesus (Hebrews 3:7-4:13), and to not go back to Judaism (Hebrews 5:11-6:20). Between these warnings, he has explained that Jesus is better than the angels, whom they highly respected. He has also explained that Jesus is more faithful – dependable and trustworthy – than Moses. He interrupted His explanation that Jesus is greater than any earthly priest to give His last and third warning. Now in chapter seven, the Spirit returns to Melchizedek in order to show us that Jesus is like Melchizedek. This is the last piece of the foundation before He starts building the walls – His conclusions. We are about to see the first of several major reasons for the book of Hebrews.

For this Melchizedek, king of Salem, priest of the Most High God, who met Abraham as he was returning from the slaughter of the kings and blessed him, to whom also Abraham apportioned a tenth part of all the spoils, was first of all, by the translation of his name, king of righteousness, and then also king of Salem, which is king of peace. Hebrews 7:1-2 (NASB)

The Holy Spirit has come back to Melchizedek. He had started to explain in Hebrews 5 that Jesus was a high priest just like Melchizedek. In order to do this, He now shares some information about Melchizedek. But first we need to travel back to Genesis and see the first time that Melchizedek shows up on the pages of scripture. Abram (later called Abraham) has just defeated the army of King Chedorlaomer and his alliance of kings in order to rescue his nephew, Lot.

Then after his return from the defeat of Chedorlaomer and the kings who were with him, the king of Sodom went out to meet him at the valley of Shaveh (that is, the King’s Valley). And Melchizedek king of Salem brought out bread and wine; now he was a priest of God Most High. And he blessed him and said, “Blessed be Abram of God Most High, Possessor of heaven and earth; And blessed be God Most High, Who has delivered your enemies into your hand.” And he gave him a tenth of all. Genesis 14:17-20 (NASB)

Upon his return, Melchizedek brings some food for Abram and his men (Genesis 14:18) and then blesses Abram. Abram responds by giving him ten percent of the spoils of the battle.

Why did Melchizedek come out to Abram? Why did he bless Abram? Scripture does not say, but it appears that God must have directed Melchizedek to meet Abram and bless him. Who is Melchizedek? Genesis tells us that he is the king of a city. He is a priest of God Most High – the true and living God. It is the book of Hebrews that tells us the name Melchizedek means “righteousness” and that Salem means “peace.” He was the righteous king of a peaceful city. Since the Jews gave names to cities and to people which described them, Melchizedek must have been a godly man. The next time we see Melchizedek is in the Psalms,

The LORD has sworn and will not change His mind, “Thou art a priest forever According to the order of Melchizedek.” Psalm 110:4 (NASB)

That is all the Old Testament says about Melchizedek. 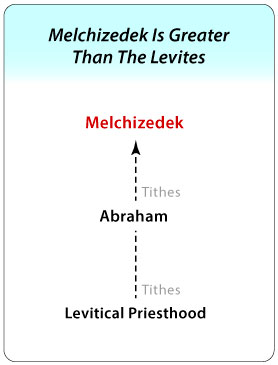 Without father, without mother, without genealogy, having neither beginning of days nor end of life, but made like the Son of God, he abides a priest perpetually. Hebrews 7:3 (NASB)

Was Melchizedek a man or Jesus? The Greek helps us answer the question. First, the word for “without father” is apator which refers to a person whose father is unknown, has died, or there is no record of his male parent. It was used for orphans (without father), foundlings, children born out of wedlock, outcasts, and outlaws. There is another Greek word for father. It is pter and it refers to one’s biological or adoptive male parent. So the emphasis of Hebrews 7:3 is that Melchizedek’s father is unknown. The same meaning is true for the phrase “without mother” and so the conclusion is reached, “without genealogy.” The Greek word means that Melchizedek has no traceable genealogy.

Was Melchizedek a man or an Old Testament appearance of Jesus Christ – a theophany? For several reasons the answer appears to be that Melchizedek was a man. First, the emphasis of Hebrews is that Melchizedek had no traceable genealogy in scripture. He has no recorded father or mother.

Hebrews also says that Melchizedek abides as a priest perpetually, dievekes. History records that Julius Caesar after just finishing a military campaign against the Gauls returned to Rome only to discover that Pompey had taken over. After Julius Caesar defeated Pompey, he was declared to be Caesar “perpetually” even though he was not Caesar before he lived, after he died or while he had been briefly deposed. He was Caesar dievekes. To describe Caesar as dievekes was to give him an honor. It does not mean he reigned as Caesar forever. How does Jesus compare to Melchizedek ? Later in Hebrews 7:24 the Spirit says that Jesus’ priesthood is permanent, aparabatos.

This is a stronger Greek word than dievekes. It means that Jesus’ priesthood cannot be transferred. Julius Caesar’s reign was interrupted and briefly transferred to Pompey. Jesus is not the same as Melchizedek.

Melchizedek is not Jesus for another reason. The Greek simply says that Melchizedek lives (v. 8). The NIV translates it correctly as “living.” But the Greek says Jesus “always lives” and He “abides or lives forever.” (Is anyone looking for proof that Jesus is God or lives forever? Here it is. He lives forever). Every time Melchizedek and Jesus are compared, stronger Greek words are used for Jesus. Melchizedek’s priesthood can be temporarily transferred, but Jesus’ priesthood cannot be transferred. Melchizedek lives, but Jesus always lives – He lives forever! Also, in Hebrews 7:4 Melchizedek is called a man. Finally, if Melchizedek is Jesus Christ, he would be Jesus’ first advent or first coming to this planet. It is clear that Melchizedek was recognized as a king of an actual city. He did not just show up and then disappear. He was a real king of a real city. This would be a clear violation of the teaching of scripture that Christ has two advents – or comes to earth two times – to die, return to life and to set up His kingdom. It does not appear that Melchizedek was an Old Testament appearance of Jesus.

The Holy Spirit is now ready to finish the foundation.

Now observe how great this man was to whom Abraham, the patriarch, gave a tenth of the choicest spoils And those indeed of the sons of Levi who receive the priest’s office have commandment in the Law to collect a tenth from the people, that is, from their brethren, although these are descended from Abraham. But the one whose genealogy is not traced from them collected a tenth from Abraham, and blessed the one who had the promises. But without any dispute the lesser is blessed by the greater. And in this case mortal men receive tithes, but in that case one receives them, of whom it is witnessed that he lives on. And, so to speak, through Abraham even Levi, who received tithes, paid tithes, for he was still in the loins of his father when Melchizedek met him. Hebrews 7:4-10 (NASB)

Melchizedek was instantly accepted by Abraham as being greater than himself, and he allowed Melchizedek to give him a blessing. Abraham in return gave Melchizedek a tithe or ten percent of the spoils of the battle. In that act of giving, Abraham’s distant offspring, the sons of Levi, also gave tithes to Melchizedek though they were not yet born but were in the loins of Abraham.

Melchizedek is greater than any levitical priest and he is recognized by God as being a priest. There is no scriptural record of his birth, his parents, his genealogy, or his death, so his priesthood has never ended. When the Word of God recognizes Jesus as a high priest in the succession of Melchizedek, Jesus’ priesthood is legal, unbroken and nontransferable, since He always lives. What a wonderful comfort for sinners like us. He is our Savior and One who will always be present to cover our sins with His blood and to ensure that we reach heaven. The foundation is laid, and the Spirit is now ready to give us the first of several major and wonderful spiritual conclusions. That is our next study.