Introduction to the Life of Christ

The Life of Christ will weave together all four of the sacred gospels: Matthew, Mark, Luke, and John. We will see Jesus in ways we never could by reading just one of the gospels or by reading them one at a time. If we were to study Matthew first, followed by Mark, then Luke, and finally the gospel of John, we would spend at least two years per gospel or about 8-10 years to see everything that they wrote about Jesus. We would also miss statements that are recorded in one gospel about an event that is included in another gospel. If we studied only one gospel, such as Matthew, we would miss some significant facts about Jesus. For example, 7% of the gospel of Mark is unique to Mark and does not appear in Matthew, Luke, or John. Forty-two percent of Matthew is unique to Matthew, 59% of Luke is unique to Luke, and 92% percent of John is unique to John. That means a study of only one of the books will miss a whole lot of insight into the life and passion of Jesus that is contained in the other three. But if we study all of the gospels together in chronological order, we will see everything that the sacred books record about each event; we will see all of the events in order. We will find details that one writer left out but another included. The ancient historian Tatian was the first person to weave all of the gospels together into one study, in A.D. 150. He was the first to venture into this journey. This will be a great study. We want to see Jesus . . . 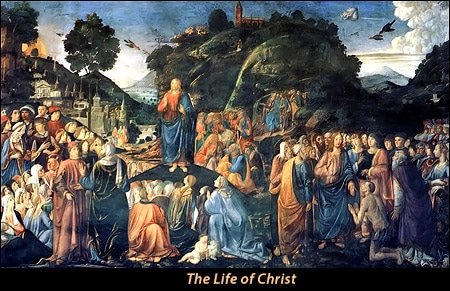 Each of the four gospels was written by two authors. The main author is God Himself, who by the Holy Spirit, influenced what Matthew, Mark, Luke, and John wrote (2 Peter 1:20-21). What they wrote were the sacred scriptures – God’s own words.

The human authors were Matthew, Mark, Luke, and John. The title of each gospel reads as “According to . . . ” That is, each gospel was according to the name that followed: Matthew, Mark, Luke, and John. Both Matthew and John were disciples of Jesus, or apostles. They lived with Jesus, heard Him teach, encouraged others, watched Him heal, and talked with Him one-on-one. They knew Jesus personally. The gospel of Matthew was written only 25-35 years after Jesus’ death.

Mark was a disciple of the Apostle Peter; he who wrote for Peter. Luke was a medical doctor (Colossians 4:14) who had a passion for accuracy and detail. He was a companion of the Apostle Paul (2 Timothy 4:11; Philemon 1:24).

These are the men that the Holy Spirit used to write the historical records about Jesus Christ our God.

The opening verses of the gospel by Luke capture one of the reasons why all of the four gospels were written.

Inasmuch as many have undertaken to compile an account of the things accomplished among us, Luke 1:1 (NASB)

They understood what happened with Jesus and had a desire to record what really occurred for all of us. Other accounts about Jesus had also been written, but they were not accurate.

A group known as the Jesus Seminar has claimed that the Gospel of Thomas is a good source for information about Jesus. In fact, they have focused on that gospel and almost completely ignored Matthew, Mark, Luke, and John. Other gospels were also written. Some of them are the Gospel of Nicodemus, the Gospel of the nativity of Mary, the Gospel of Pseudo-Matthew, and the Arabic Gospel of the Infancy of Jesus. But all of these gospels were rejected by the apostles and subsequently by the early church.

How do we know this? The answer starts to unfold when we discover that the Apostle Peter informed those of his time that the Apostle Paul was writing scripture in 2 Peter 3:15-16. Then in 1 Timothy 5:18, the Apostle Paul quotes the statement, “The laborer is worthy of his wages”, as being scripture. Now this is wonderful because this passage occurs only in Luke 10:7. This means that Paul says that Luke wrote scripture. Therefore, Peter endorsed Paul, who endorsed Luke. These three men wrote the majority of the New Testament: Luke wrote the Gospel of Luke and Acts; Paul wrote a large portion of the New Testament; and Peter wrote 1 and 2 Peter. This is wonderful. But the most important discovery is that the apostles were already determining who was and who was not writing scripture.

Some have taught that the early church spent years attempting to determine what books belonged in the Bible. But that is not true. We have evidence from the early church fathers and a document called the Muratorian Fragment that the books of the New Testament were well established very early.

The earliest list of all of the New Testament books is found in the Muratorian fragment (A.D. 170). It is damaged in multiple places. That is why it is called a fragment. The beginning has been torn off, and references to some books are missing. The author of the document gave a running account of the books of the New Testament. In the document all of the New Testament books are listed except for Matthew, Mark, Hebrews, James, 1-2 Peter and 3 John. Matthew and Mark are missing due to a tear, since the author of the Muratorian refers to the “third book of the gospel.” So only Hebrews, James, 1-2 Peter and 3 John are missing from the list. Were they part of the torn piece too? We do not know. But as early as A.D. 70-130, Hebrews and 1 and 2 Peter were already quoted as being part of the New Testament in Pseudo-Barnabas and Clement of Rome. The Muratorian Fragment includes other books but clearly states that they were not considered to be scripture.

The third book of the Gospel: according to Luke . . . The fourth of the Gospels is by John, one of the disciples . . . The Acts of all the apostles have been written in one book. Addressing the most excellent Theophilus, Luke includes one by one the things which were done in his own presence, as he shows plainly by omitting the passion of Peter and also Paul’s departure when he was setting from the city for Spain. As for the letters of Paul . . . First of all [he wrote] to the Corinthians, . . . then to the Galatians [forbidding] circumcision; to the Romans he wrote at greater length about the order of the scriptures and also insisting that Christ was their primary theme. It is necessary for us to give an argued account of all these, since the blessed apostle Paul himself, following the order of his predecessor John, but not naming him, writes to seven churches in the following order: first to the Corinthians, second to the Ephesians, third to the Philippians, fourth to the Colossians, fifth to the Galatians, sixth to the Thessalonians, seventh to the Romans. But although [the message] is repeated to the Corinthians and Thessalonians by way of reproof . . . John also, while he writes to seven churches in the Apocalypse, yet speaks to all. Moreover, [Paul writes] one [letter] to Philemon, one to Titus, and two to Timothy in love and affection . . . But the letter of Jude and the two superscribed with the name of John are accepted . . . The Apocalypse of John we also receive . . .[1]

The apostles had already determined what was scripture. The books of the New Testament were recognized very early by the apostles. The Apostle John died about A.D. 100 and only 50-70 years later this fragment existed. The New Testament books were not being discovered, but were being defended by the early church in the years that followed.

“For the apostles, in the memoirs composed by them, which are called Gospels, have thus delivered unto us what was enjoined upon them . . .” [2]

“And on the day called Sunday, all who live in cities or in the country gather together to one place, and the memoirs of the apostles or the writings of the prophets are read, as long as time permits; then, when the reader has ceased, the president verbally instructs, and exhorts to the imitation of these good things.” [3]

The gospels were called the memoirs of the apostles and they were being read in the churches on Sunday. The early church had already identified the gospels as being scripture.

The gospel writers were either eyewitnesses of Jesus or they knew people who were.

. . . just as they were handed down to us by those who from the beginning were eyewitnesses and servants of the word, it seemed fitting for me as well, having investigated everything carefully from the beginning, to write it out for you in consecutive order, most excellent Theophilus . . . Luke 1:2-3 (NASB)

Luke had many opportunities to speak with the apostles and others about Jesus. We know that the Jewish rabbis required that their students memorize their teachings. Since Jesus was a rabbi, Jesus’ disciples probably memorized His teachings too! Since most teachers repeat and repeat their sayings, it would not be hard to memorize long speeches and sayings. At that time in history, oratory was preferred and highly respected.

But Luke was not alone in writing his gospel. The Holy Spirit guided and influenced him as he wrote (2 Peter 1:20-21). That is why the Apostle Paul says that he wrote scripture. Jesus also made this promise in John 14:26,

But the Helper, the Holy Spirit, whom the Father will send in My name, He will teach you all things, and bring to your remembrance all that I said to you. John 14:26 (NASB)

Luke had a reason for writing. He wanted to be accurate, but he also wanted to put everything in chronological order. We will see during our study that Luke’s gospel is in chronological order. But Luke had a more important reason for writing. He was writing for Theophilus. He was writing for someone who appears to have had some doubts about Jesus.

. . . so that you may know the exact truth about the things you have been taught. Luke 1:4 (NASB)

He wanted to help Theophilus know the “exact truth.” The Greek phrase has the idea of “a firm step” or “stability with a sense of security and safety.” Luke wanted Theophilus to be secure in what he believed to be true.

That is the reason all of the gospels were written. God wants us to know the truth. Jesus Christ is our God and our savior. The four gospels were not written for academic reasons. The apostles did not write them to make money. They were not seeking fame. The gospels were written so that we might know the truth. Why were they written? The answer is illustrated in a magazine cartoon. Years ago there was a cartoon in a magazine about a thief who was wearing a “Lone Ranger” mask to hide his face. His gun was pointed toward a frightened victim and he yelled, “Give me all your valuables.” In the last panel of the cartoon, the victim started stuffing all of his friends into the thief’s sack. Our friends are our valuables.

Luke wrote his gospel for his friend Theophilus. All of the gospels were written by God through Matthew, Mark, Luke, and John to their friends – to all of the saints. It is our desire to search these memoirs, written by men who loved Jesus as a friend. Together we will search and seek to see Jesus’ life and know His heart. We want to know Him in ways we have never known Him. We long for a personal encounter with Jesus. We want to see Jesus . . .