Would Jesus cuss, lie and deceive to be an undercover agent?

Would Jesus cuss, lie, deceive and pretend to be a criminal and have the job as an undercover agent?

A knowledge of God answers almost every question we have about God and humanity and statements in Scripture. We will discover the answer to the question, “Would Jesus cuss, lie and deceive to be an undercover agent?” by learning about God’s character. 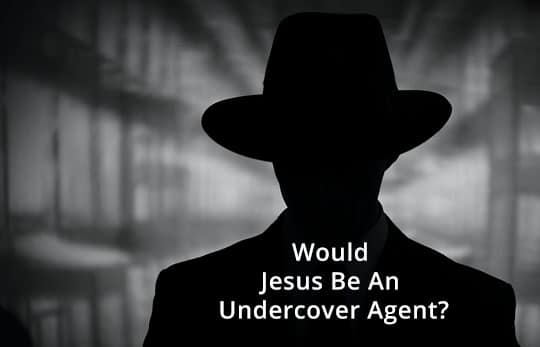 God Does Not Lie

The first character trait of God that will help us answer the question, “Would Jesus cuss, lie and deceive to be an undercover agent?” is that God does not lie. Numbers 23:19 states,

In the same way God, desiring even more to show to the heirs of the promise the unchangeableness of His purpose, interposed with an oath, so that by two unchangeable things in which it is impossible for God to lie, we who have taken refuge would have strong encouragement to take hold of the hope set before us. Hebrews 6:17-18 (NASB)

Hebrews 6:18 says that there are “two unchangeable things”or two unchangeable characteristics about God. The first is that God makes promises which will not change (Malachi 3:6; Hebrews 12:8) and the second is that God cannot lie. The Greek word that is translated as “lie” is pseudomai, which mean”to lie,” “to speak falsehoods” or “to deceive by falsehood.”

Therefore, would Jesus be an undercover agent, if He had to lie? The answer is no!

God Does Not Deceive

The next attribute or character trait of God is that God does not deceive. That is the message of Titus 1:2.

The Greek word that is translated as “lie” in Titus 1:2 is apseudes, which means “not speaking falsehood or “without deceit.” Therefore, God does not deceive us either. God does not tell us everything that is true or will happen but that is not deception. When Scripture reveals certain truths, that is called mystery or revelation (Romans 11:25; 16:25; 1 Corinthians 2:7; 15:51; Ephesians 1:9; 3:3, 9).

God Does Not Sin

The Bible also reveals that God cannot sin. In fact, He cannot be tempted to sin. That is, God is not motivated from within to sin, but we are!

Let no one say when he is tempted, “I am being tempted by God”; for God cannot be tempted by evil, and He Himself does not tempt anyone. James 1:13 (NASB)

But He  knew  what they were thinking, and He said to the man with the withered hand, “Get up and  come forward!” And he got up and  came forward. Luke 6:8 (NASB)

The message is that Jesus knows everything. That is another character trait of God.