Why is God able to forgive all of our sins? — The Work of Christ

The New Testament uses the word sin as a singular word (i.e. 1 sin) only in reference to saved persons. Conversely, Scripture only uses the word sins when non-Christians are referenced. This indicates that once a person is saved, God views ALL of our sins, past, present and future as one sin (singular). When Jesus said it is finished while being crucified, was this the point when the law was slathered with grace and all our sins, by salvation, became sin? If true, this demonstrates the depth we reach God at and how our confession and proclamation provide God the legitimacy of forgiving all our sins.

Some believe that God’s ability to forgive our sins actually depends upon us. They say that God is able to forgive us if we perform some positive, sacrificial action(s) such as: penance, baptism, service to the poor or maybe confession of their sin to a priest. The question presented in this article is:  is it possible that our confession and proclamation about Jesus is what actually provides God the legitimacy to forgive all our sins? Or, we could ask, “Why is God able to forgive all of our sins?” 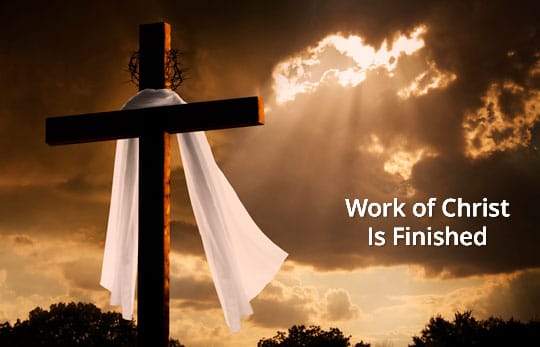 Why is God able to forgive all of a Christian’s sins? The answer is given in Romans 3:22-25 which reads,

. . . even the righteousness of God through faith in Jesus Christ for all those who believe . . . being justified as a gift by His grace through the redemption which is in Christ Jesus; whom God displayed publicly as a propitiation in His blood through faith. Romans 3:22-25

Here the Holy Spirit tells us that all who believe in Jesus Christ are justified and God justifies them by grace. That is, justification is a gift from God as a result of His grace. We must not forget that Ephesians 2:8-9 says that we are saved by grace through faith and that faith is a gift from God. It is grace that gives the gift of faith to a person so that they become a Christian. Romans 5:1 says that Christians are justified by faith.

Therefore, having been justified by faith, we have peace with God through our Lord Jesus Christ . . . Romans 5:1 (NASB)

Next, we are told that God the Father is able to do this because Jesus Christ satisfied the Father’s wrath by His blood or death on the cross. The word propitiation means to “satisfy or please.” This verse teaches us that Christ satisfied the offended holiness and wrath of our God against the sins of those who are saved. In summary, these three verses teach us that the Father is able to declare us to be righteous or without sin because of what Jesus did on the cross. Christ’s death satisfied the Father’s anger against the sins of the elect. Jesus did all the work of salvation. There is nothing left for a believer to do! Our salvation is guaranteed and Christians are going to heaven (John 3:16). That is why God can legitimately forgive all our sins and justify Christians.

But what does it mean that someone is justified? The Greek word for “justified” is the verb dikaioo. In the papyri this word is used in a legal sense: “to make righteous.” It literally means “to judge to be good.” Therefore, it has the sense that God judicially declares those who have faith in Christ to be righteous, that is, to have the righteousness of God. Notice 2 Corinthians 5:21 states,

He made Him who knew no sin to be sin on our behalf, so that we might become the righteousness of God in Him. 2 Corinthians 5:21 (NASB)

1 Peter 2:24 also teaches that when Jesus died for our sins, He literally took our sins in His body. He died the death that we deserved to have died. Jesus did all the work to save those who believe Him from their sins.

. . . and He Himself bore our sins in His body on the cross, so that we might die to sin and live to righteousness; for by His wounds you were healed. 1 Peter 2:24 (NASB)

In Galatians 1:3-4  we are told that the reason our sins can be forgiven is that Jesus gave Himself for our sins so that we can be rescued from our sins. This was according the will of the Father.

Grace to you and peace from God our Father and the Lord Jesus Christ, who gave Himself for our sins so that He might rescue us from this present evil age, according to the will of our God and Father . . . Galatians 1:3-4 (NASB)

Also, Jesus told us that He willingly laid down His life for us and He had the authority to resurrect Himself (John 10:17-18).

For Christ also died for sins once for all, the just for the unjust, so that He might bring us to God, having been put to death in the flesh, but made alive in the spirit . . . 1 Peter 3:18 (NASB)

When we are told that Christ died once for all, this means that His sacrifice on the cross was more than sufficient to forgive all of our sins for all time. The following three passages teach us the same truth. Jesus offered Himself for our sins at one time. As a result, believers are  declared to be righteous for all time. Christ only needed to do this once! That is, a believer’s past, present and future sins are forgiven. He does not need to repeatedly die for each one of our sins as they are committed.  Hebrews 10:17-18 adds that God will not remember a believer’s sins any longer. Why? Believers have been legally declared to be righteous or sinless at the moment they believed in Christ.

For by one offering He has perfected for all time those who are sanctified. Hebrews 10:14 (NASB)

AND THEIR SINS AND THEIR LAWLESS DEEDS
I WILL REMEMBER NO MORE.” Now where there is forgiveness of these things, there is no longer any offering for sin. Hebrews 10:17-18 (NASB)

The idea that the Scriptures teach us that all of a believer’s past, present and future sins are forgiven because the word “sin” and not “sins” occurs only in reference to Christians is wrong. Why is the idea wrong? The answer is that the word “sins” is used in the New Testament to refer to any sin a person commits whether they are a Christian or a non-Christian. Here are some examples.

First, 1 John 1:9 is an example of “sins” being used in reference to Christians after they have believed in Christ, after their new birth.

If we confess our sins, He is faithful and righteous to forgive us our sins and to cleanse us from all unrighteousness.  1 John 1:9 (NASB)

In 1 John 1:6-9, the apostle John describes three kinds of people. He starts by explaining that those who claim to be Christians but continue to “not practice the truth” reveal that they are liars. The sign or indication that a person is a Christian is that they will sin less and less with time. Then in 1 John 1:8, the apostle says that those who claim to be without sin or sinless have deceived themselves. That is, no one is without sin. Finally, in 1 John 1:9 we are told that true Christians still sin. So the apostle says, “If we confess our sins . . .” Notice that the plural form of sins is used of Christians. It happens again in 1 John 2:1. Notice the the apostle refers to the Christians as “little children” and then says, “If anyone sins . . .” He refers to a Christian sinning. James 5:15 is another verse that refers to “sins” and is used in reference to Christians. One example of “sin” being used in reference to a Christian can be found in Romans 6:12. Therefore, we have examined enough Scriptures to demonstrated that both “sins” and “sin” are used in reference to Christians.

Why is God able to forgive all of our sins? Why can God legitimately forgive all our sins? The answer is because Jesus Christ died on the cross in order to forgive our sins. Notice the message of 1 Corinthians 15:1-4,

Now I make known to you, brethren, the gospel which I preached to you, which also you received, in which also you stand, by which also you are saved, if you hold fast the word which I preached to you, unless you believed in vain. For I delivered to you as of first importance what I also received, that Christ died for our sins according to the Scriptures, and that He was buried, and that He was raised on the third day according to the Scriptures . . . 1 Corinthians 15:1-4 (NASB)

The Bible also teaches that while a Christian’s past, present and future sins are all forgiven, Christians will still sin because we live in this fleshly body which wants to sin. For more information the reader is encouraged to visit, “Am I still a Christian if I continue sinning?”

What is Lordship salvation? What does the Bible teach?
He Humbled Himself to Help Us
What is the difference between holy and righteous in the Bible?
What does redemption mean in the Bible? – Redemption In Salvation
Are a Christian’s future sins already forgiven?
Is there a sin that God will not forgive? When does He forgive?
Am I still a Christian if I continue sinning?