Why did God allow the KJV to be corrupted with I John 5:7? – Comma Johanneum

Why did God allow the KJV to be corrupted with I John 5:7?

For there are three that bear record in heaven, the Father, the Word, and the Holy Ghost: and these three are one. 1  John 5:7 (KJV)

Our purpose is not to discuss whether the Comma should be included in our Bibles or not. The article “Is The King James Bible The Best Bible?” includes a discussion of the Comma and concludes that it does not belong in our Bibles. The purpose of this article is to answer the question, “Why did God allow the KJV to contain false information, e.g., I John 5:7?” 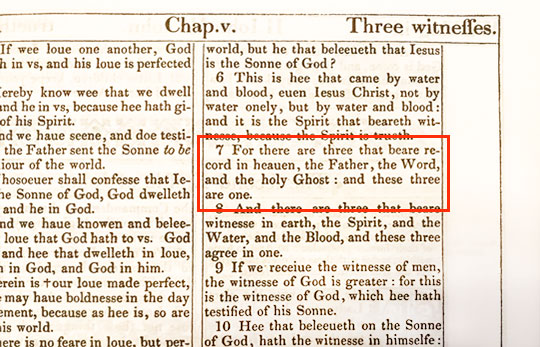 God Promised To Preserve The Word of God

Do not think that I came to abolish the Law or the Prophets; I did not come to abolish but to fulfill. Matthew 5:17 (NASB)

There are three other passages that promise the Scriptures are forever. That is, the Scriptures will continue while this heaven and earth exist. But some day God will destroy this universe (Isaiah 34:4; 65:17; 2 Peter 3:10-13; Revelation 20:11; 22:1). Here are the three passages.

Of old I have known from Your testimonies
That You have founded them forever.
Psalm 119:152  (NASB)

For,
“ALL FLESH IS LIKE GRASS,
AND ALL ITS GLORY LIKE THE FLOWER OF GRASS.
THE GRASS WITHERS,
AND THE FLOWER FALLS OFF,
BUT THE WORD OF THE LORD ENDURES FOREVER.”
1 Peter 1:24-25 (NASB)

Therefore, did the Comma or 1 John 5:7 corrupt the Word of God? The answer is no, since the Word of God cannot be corrupted by miscopying, torn papyri, parchments, broken tablets, torn pages in a Bible, miscopying or a faulty translation. Copies have been made of the autographs down though time and some of those copies contain copyist errors, but those errors did not change the Word of God.

The inclusion of 1 John 5:7 in the KJV Bible was a serious error by Erasmus as explained in “Is The King James Bible The Best Bible?” The following quote comes from this document,

“When the existing manuscripts of 1 John are evaluated, the Comma occurs only in a very few of them. James White quotes John William Burgon,

If so few manuscripts are sufficient to establish such illegitimate readings, [then] one can oppose so many and weighty things (both of evidence and of argument), that obviously nothing will be left in the serious matter of a true and a false standard, and the text of the New Testament in general will be entirely uncertain and doubtful.

1 John 5:7 is a faulty translation. Most modern translations have corrected that error. That is, there is no credible manuscript evidence that 1 John 5:7 should have ever been included in the KJV. It was never part of the Word of God.

Why did God allow sinful men to make a mistake and include 1 John 5:7 in the KJV? The answer is that God allows men to sin and make mistakes all the time! But even in their mistake, 1 John 5:7 does not deny any doctrine in the Word of God. Nor does the verse create any new doctrine. It was included by Erasmus in order to have a single verse in the Bible that would simply and clearly state the doctrine of the trinity. But that was completely unnecessary since scripture more than adequately teaches that God is a trinity. The study series “Jesus Is God” presents the biblical doctrine of the trinity in both the Old Testament and New Testament, and it does not include 1 John 5:7.

The inclusion of 1 John 5:7 does not change any doctrine in the Bible. Its inclusion or exclusion does not affect anything that is taught in the Word of God. The inclusion of the verse was an error. The goal and purpose of every Bible translation must be to accurately provide us the word of the original autographs. Another important article that demonstrates that our Bibles are incredibly precise and doctrinally completely trustworthy and accurate is “How Accurate Is The Bible?” It should be noted “Mr. Whiston’s Primitive New Testament” published in 1667-1752 does not contain the Comma, an example that other ancient translations avoided the error.

Is The King James Bible The Best Bible?
Are any of the English Bible translations 100% accurate?
How Accurate Is The Bible?
Jesus Is God