What is the Muratorian Fragment?

What is the Muratorian Fragment?

The Old Testament was already written by the time Jesus Christ was born. During His ministry He quoted from many Old Testament books treating them as authoritative. Luke 24:44 reveals that He endorsed all of the scriptures that had been written.

Later the apostles reviewed the writings of the other apostles and collectively determined the scriptures that should be added to the Old Testament scriptures. Today, we call them the New Testament scriptures. This becomes clear when we read 2 Pet. 3:15-16 and discover that the Apostle Peter gave approval to Paul’s writings. We also discover that Paul endorsed Luke in 1 Tim 5:17-18 when he quoted Luke 10:7. It is clear from Luke 1:1-4; Col. 4:16 and 1 Thess 5:27 that the writings of the apostles were distributed and read by the various churches. In short, the New Testament books were approved by the apostles. By the end of the first century, the canon or the Bible was complete (John writing the book of Revelation in A.D. 95-96). By the end of the second century, the early church fathers had quoted from all of the New Testament books. The Muratorian Fragment (A.D. 150-170) listed all the New Testament books, except for Matthew, Mark, Hebrews, James, 1-2 Peter and 3 John. The document is called a fragment because portions of the document have been torn off. The well known biblical scholar Westcott states that the missing books were probably included initially because the document is torn where they should have been listed. The Bible had already been established. In the years that followed, the authority of certain books was challenged. Church councils were convened to review and verify the contents of our Bible. The Council of Carthage (A.D. 397) is usually pointed to as the council which finally put the debates to rest. But unfortunately there will always be men who will challenge the authority of various books in the Bible. 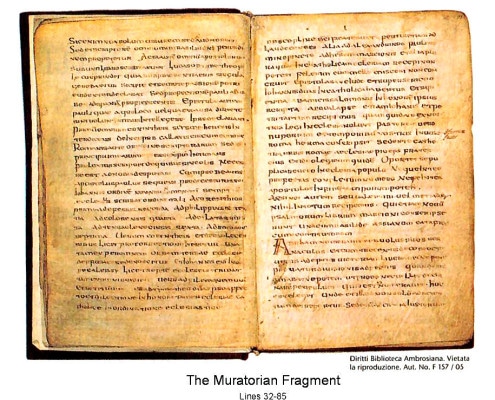 The third book of the gospel: according to Luke.

After the ascension of Christ, Luke the physician, whom Paul had taken along with him as a legal expert, wrote [the record] down in his own name in accordance with [Paul’s] opinion. He himself, however, never saw the Lord in the flesh and therefore, as far as he could follow {the course of events}, began to tell it from the nativity of John.

The fourth gospel is by John, one of the disciples.

When his fellow-disciples and bishops encouraged him, John said, “Fast along with me three days from today, and whatever may be revealed to each, let us relate it one to another.” The same night it was revealed to Andrew, one of the apostles, that John in his own name should write down everything and that they should all revise it. Therefore, although different beginnings are taught for the various books of the gospel, it makes no difference to the faith of believers, since in all of them everything has been declared by one primary Spirit, concerning his nativity, passion and resurrection, his association with his disciples, and his twofold advent – his first in humility, when he was despised, which is past; his second resplendent in royal power, his coming again. It is no wonder, then, that John should so constantly present the separate details in his letters also, saying of himself: “What we have seen with our eyes and heard with our ears and our hands have handled, these things have we written.” For in this way he claims to be not only a spectator but a hearer, and also a writer in order of the wonderful facts about our Lord.

The Acts of all the apostles have been written in one book. Addressing the most excellent Theophilus, Luke includes one by one the things which were done in his own presence, as he shows plainly by omitting the passion of Peter and also Paul’s departure when he was setting out from the City for Spain.

As for the letters of Paul, they themselves show those who wish to understand from which place and for which cause they were directed. First of all [he wrote] to the Corinthians forbidding schisms and heresies; then to the Galatians [forbidding] circumcision; to the Romans he wrote at greater length about the order of the scriptures and also insisting that Christ was their primary theme. It is necessary for us to give an argued account of all these, since the blessed apostle Paul himself, following the order of his predecessor John, but not naming him, writes to seven churches in the following order: first to the Corinthians, second to the Ephesians, third to the Philippians, fourth to the Colossians, fifth to the Galatians, sixth to the Thessalonians, seventh to the Romans. But although [the message] is repeated to the Corinthians and Thessalonians by way of reproof, yet one church is recognized as diffused throughout the whole world. For John also, while he writes to seven churches in the Apocalypse, yet speaks to all. Moreover [Paul writes] one [letter] to Philemon, one to Titus and two to Timothy in love and affection; but they have been hallowed for the honor of the catholic church in the regulation of ecclesiastical discipline.

There is said to be another letter in Paul’s name to the Laodiceans, and another to the Alexandrines, [both] forged in accordance with Marcion’s heresy, and many others which cannot be received into the catholic church, since it is not fitting that poison should be mixed with honey.

But the letter of Jude and the two superscribed with the name of John are accepted in the catholic [church]; Wisdom also, written by Solomon’s friends in his honour. The Apocalypse of John we also receive, and that of Peter, which some of our people will not have to be read in church. But the Shepherd was written by Hermas in the city of Rome quite recently, in our own times, when his brother Pius occupied the bishop’s chair in the church of the city of Rome; and therefore it may be read indeed, but cannot be given out to the people in church either among the prophets, since their number is complete, or among the apostles at the end of the times.

But none of the writings of Arsinuous or Valentinus or Miltiades do we receive at all. They have also composed a new book of psalms for Marcion; [these we reject] together with Basilides [and] the Asian founder of the Cataphrygians . . . [2]

The table below is a quick summary of the books listed in this document.

The document demonstrates that the New Testament was recognized early in the second century by the early church fathers. They also recognized the authors of the books. It was not until years later that doubts about some of the books occurred.

The Rescue -Salvation
What Is The Bible?