What is the message of the book of Job?

What is the message of the book of Job?

The author of the book of Job is unknown. If Job wrote the book, then he knew about the events that occurred in heaven (Job 1-2) after God rebuked him in chapters 38-42. Some believe that Elihu, Moses, Solomon, Isaiah, Jeremiah, Baruch or even Ezra wrote the book. One Rabbinic tradition states that Moses wrote the book. This is possible since Job lived in the land of Uz (Job 1:1) which was next to Midian, where Moses lived for forty years. 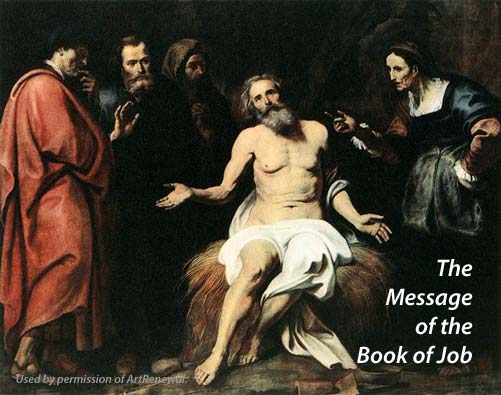 Date of the Book of Job

Message of the Book of Job

The message of the book of Job is that righteous people can suffer even though they have not done anything wrong. Then in chapter 2 Job asks, “Shall we indeed accept good  from God and not accept adversity?”  The underlying theme of the book is “Why does Job serve God?” The answer is because He is God and we are but men.

The account of the events that occurred start in chapter 1 when we are told that Satan visited God and God informed Satan that Job was a righteous man. Satan objected declaring that Job only served God because He protected Job and blessed him. In response, a contest follows. God allows Satan to cause Job to suffer. Job loses his children and all of his wealth. Only he and his wife remain and then Job became sick. The events described in Job become a lesson for us. We discover that we can suffer even though we have done nothing wrong. We will suffer for unrepentant sin and we can suffer even though we are righteous.

Throughout the book we discover that Job’s three friends gave him bad counsel (Job 3-37). They repeatedly tried to help Job discover the root cause of his suffering. They did not know about the discussion and agreement in heaven so they faulted Job for his suffering. In Job 38-41 God speaks to Job  and gives him magnificent insight into His character and power. Job responds with humility. In Job 42:7-9 God rebuked Job’s three friends. Finally, God doubled Job’s wealth and family.

The message of the book is that the righteous can suffer even though they have not sinned. God will do as He desires and we must respond as Job did,

Shall we indeed accept good from God and not accept adversity?”In all this Job did not sin with his lips. Job 2:10 (NASB)

The next time we suffer we should not immediately assume we have sinned and realize that a contest may be in process. Let’s give God glory!