What is the meaning of Christ in the Bible?

What is the meaning of Christ in the Bible?

In the Bible “Christ” is not a swear word nor is it the first name or the last name of the One called “Jesus.” What follows is a brief explanation of the meaning of “Christ” in the Old and New Testaments. 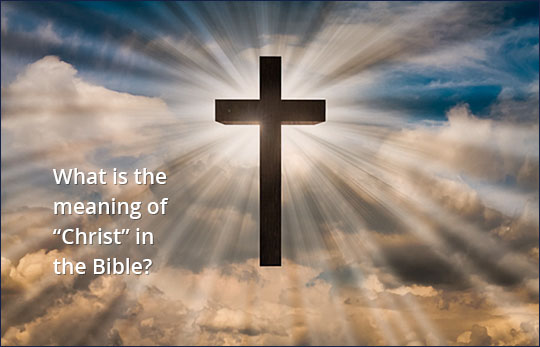 Meaning of Christ In The Bible

The Greek word for “Christ” is Christos and the Hebrew word is meshiakh and both mean “anointed one.” Sometimes “Christ” appears before “Jesus” such as “Christ Jesus” and other times if follows the name “Jesus,” such as “Jesus Christ.”

He found first his own brother Simon and said to him, “We have found the Messiah” (which translated means Christ). John 1:41 (NASB)

The woman said to Him, “I know that Messiah is coming ( He who is called Christ); when that One comes, He will declare all things to us.” John 4:25 (NASB)

Where Does Christ Appear In The Bible?

The first time Christ appears in the New Testament is in Matthew 1:18 at the announcement of the birth of Jesus Christ to Joseph, the future husband of Mary.

Now the birth of Jesus Christ was as follows: when His mother Mary had been betrothed to Joseph, before they came together she was found to be with child by the Holy Spirit. Matthew 1:18 (NASB)

The last time “Christ” appears is in Revelation 20:6 when the Holy Spirit reminds us that Christ will reign as king as for one thousand years.

Blessed and holy is the one who has a part in the first resurrection; over these the second death has no power, but they will be priests of God and of Christ and will reign with Him for a thousand years. Revelation 20:6 (NASB)

The Hebrew name that corresponds to “Christ” is used as a title only three times in the Old Testament in Psalms 2:2 and Daniel 9:25-26.

The kings of the earth take their stand
And the rulers take counsel together
Against the LORD and against His Anointed . . . Psalm 2:2 (NASB)

So you are to know and discern that from the issuing of a decree to restore and rebuild Jerusalem until Messiah the Prince there will be seven weeks and sixty-two weeks; it will be built again, with plaza and moat, even in times of distress. Then after the sixty-two weeks the Messiah will be cut off and have nothing, and the people of the prince who is to come will destroy the city and the sanctuary. And its end will come with a flood; even to the end there will be war; desolations are determined. Daniel 9:25-26 (NASB)

Christ is the official title of the second person of the Godhead. Some day in the future He will rule as king over a kingdom that will last forever. It will start on earth and then transition to the eternal state.

What is the meaning of Jesus in the Bible?
What is the difference in meaning between Jesus Christ and Christ Jesus?
What are the names of God?
What does the name El Shaddai mean?
Jesus Is the Great I Am