What happened to Pontius Pilate after the death of Christ?

What happened to Pontius Pilate after the death of the Lord Jesus Christ?

Let’s discover what happened to Pontius Pilate after the death of Christ? We will start by discovering what history tells us about this leader. We do not know where Pontius Pilate was born. One tradition says that he was a member of the Pontii tribe and of Samnite nobility.[1] The Samnites lived in the southern region of Italy. Another tradition states that Pontius Pilate was born in Germany and was a bastard son of Tyrus, king of Mayence. Reportedly, his father sent him to Rome as a hostage. While there he was charged with murdering someone and was sent to Pontus, which is on the southeastern border of the Black Sea.[2] In short, the traditions are in conflict and we do not really know where Pilate was born or his life as a teenager or young adult. 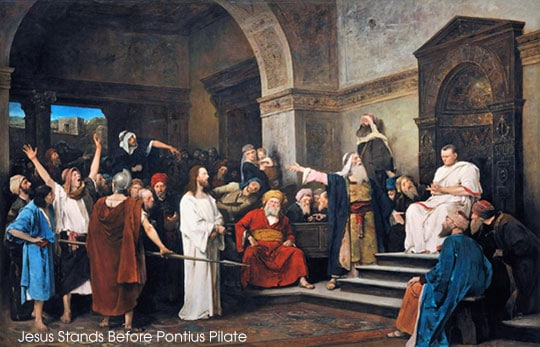 Supposedly, his name was changed in Pontus to Pontius Pilate and he was eventually appointed the sixth governor or procurator of Judea by Sejanus, a favorite of the Roman emperor Tiberius. Pilate was unpopular with the Jewish population because he hung worship images of the emperor throughout Jerusalem and minted coins with the image of pagan symbols.[3]

But now Pilate, the procurator of Judea, removed the army from Cesarea to Jerusalem, to take their winter quarters there, in order to abolish the Jewish laws. So he introduced Caesar’s effigies, which were upon the ensigns, and brought them into the city; whereas our law forbids us the very making of images; on which account the former procurators were wont to make their entry into the city with such ensigns as had not those ornaments. Pilate was the first who brought those images to Jerusalem, and set them up there; which was done without the knowledge of the people, because it was done in the nighttime; but as soon as they knew it, they came in multitudes to Cesarea, and interceded with Pilate many days, that he would remove the images; and when he would not grant their requests, because it would tend to the injury of Caesar, while yet they persevered in their request, on the sixth day he ordered his soldiers to have their weapons privately, while he came and sat upon his judgment seat, which seat was so prepared in the open place of the city, that it concealed the army that lay ready to oppress them: and when the Jews petitioned him again, he gave a signal to the soldiers to encompass them round, and threatened that their punishment should be no less than immediate death, unless they would leave off disturbing him, and go their ways home. (59) But they threw themselves upon the ground, and laid their necks bare, and said they would take their death very willingly, rather than the wisdom of their laws should be transgressed; upon which Pilate was deeply affected with their firm resolution to keep their laws inviolable, and presently commanded the images to be carried back from Jerusalem to Cesarea.[4]

The New Testament gospel of Luke records that Pilate had heard about Jesus and His miracles before He was brought before Pilate.

Now Herod was very glad when he saw Jesus; for he had wanted to see Him for a long time, because he had been hearing about Him and was hoping to see some sign performed by Him.  Luke 23:8 (NASB)

Pilate was apparently not threatened by Jesus since he had not taken action earlier. But the Jewish leaders did care. They wanted Jesus dead. As a result, pressure was applied by the Jewish Sanhedrin (Luke 23:2-7) upon Pilate. It appears that Pilate attempted to avoid a direct conflict with the Jewish leaders by hoping that King Herod might release Jesus (Luke 23:7-11). Pressure was also applied by his wife to have nothing to do with Jesus. Tradition states that her name was Claudia Procula.[5]

While he was sitting on the judgment seat, his wife sent him a message, saying, “Have nothing to do with that righteous Man; for last night I suffered greatly in a dream because of Him.” Matthew 27:19 (NASB)

History records that Pilate avoided her counsel and crucified Jesus Christ. His decision may have also been made to avoid a bad report to Rome.

After Jesus died on the cross, the gospels record that Pilate allowed several members of the Sanhedrin, Joseph of Arimathea and Nicodemus, to bury Jesus (Mark 15:43; John 3:1; 19:38-40). Pilate also stationed a guard of Roman solders at the tomb after a large stone was rolled into place at the opening to prevent anyone from taking the body (Matt. 27:65-66). Yet, Jesus returned from death to life and left the tomb anyway (Matt. 28:1-6).

Now after the Sabbath, as it began to dawn toward the first day of the week . . . And behold, a severe earthquake had occurred, for an angel of the Lord descended from heaven and came and rolled away the stone and sat upon it. And his appearance was like lightning, and his clothing as white as snow. The guards shook for fear of him and became like dead men. The angel said to the women, “Do not be afraid; for I know that you are looking for Jesus who has been crucified. He is not here, for He has risen, just as He said. Come, see the place where He was lying.” Matthew 28:1-6 (NASB)

The Jewish historian Flavius Josephus records these words about Pilate,

Now, there was about this time Jesus, a wise man, if it be lawful to call him a man. For he was a doer of surprising feats – a teacher of such men as receive the truth with pleasure. He drew over to him both many of the Jews and many of the Gentiles. He was [the] Christ; and when Pilate, at the suggestion of the principal men amongst us, had condemned him to the cross, those that loved him at the first did not forsake him, for he appeared to them alive again the third day, as the divine prophets had foretold these and ten thousand other wonderful things concerning him; and the tribe of Christians, so named from him, are not extinct to this day.[6]

From the Acts of Pontius Pilate

Later, Pilate in his own words stated that Jesus was crucified in his official record, Acts of Pilate, which was sent to Rome and archived there for others to read.

And that it was predicted that our Christ should heal all diseases and raise the dead, hear what was said. There are these words: “At His coming the lame shall leap as an hart, and the tongue of the stammerer shall be clear speaking: the blind shall see, and the lepers shall be cleansed; and the dead shall rise, and walk about.” And that He did those things, you can learn from the Acts of Pontius Pilate.[7]

And the expression, “They pierced my hands and my feet,” was used in reference to the nails of the cross which were fixed in His hands and feet. And after He was crucified they cast lots upon His vesture, and they that crucified Him parted it among them. And that these things did happen, you can ascertain from the Acts of Pontius Pilate.[8]

Pontius Pilate should have listened to his wife. For more information about the Acts of Pilate, visit “Pontius Pilate – refers to Christ in official records.”

According to Flavius Josephus, Pilate’s supporter, Sejanus, was murdered later. Without his protector in power, Pilate made a major error and suppressed a small uprising in Samaria. The leader of the Samaritan group had promised that “He would show them those sacred vessels which were laid under that place, because Moses put them there.”[9] But Pilate sent his troops and defeated them before they arrived at Mt. Gerizim. However, trouble followed as indicated in Josephus’ following statement,

But when this tumult was appeased, the Samaritan senate sent an embassy to Vitellius, a man that had been consul, and who was now president of Syria, and accused Pilate of the murder of those that were killed . . . So Vitellius sent Marcellus, a friend of his, to take care of the affairs of Judea, and ordered Pilate to go to Rome, to answer before the emperor to the accusation of the Jews. So Pilate, when he had tarried ten years in Judea, made haste to Rome, and this in obedience to the orders of Vitellius, which he dare not contradict; but before he could get to Rome, Tiberius was dead.[10]

Eusebius reported that Pontius Pilate committed suicide during the reign of Caius or Emperor Caligula. Eusebius records the following for us,

It is worthy of note that Pilate himself, who was governor in the time of our Savior, is reported to have fallen into such misfortunes under Caius, whose times we are recording, that he was forced to become his own murderer and executioner; and thus divine vengeance, as it seems, was not long in overtaking him. This is stated by those Greek historians who have recorded the Olympiads, together with the respective events which have taken place in each period.[11]

The quote reveals that many Greeks considered Pilate’s misfortunes to be divine justice for the death of Jesus Christ. Tradition adds that Pilate died in Vienne, France on the Rhone or on Mount Pilatus, Switzerland.[12] The Eastern Orthodox church believes that Pilate and his wife eventually became Christians. That would be wonderful if true.

Pontius Pilate - refers to Christ in official records
Did the people who crucified Christ go to hell or the Lake of Fire?
Was Jesus resurrected on the same day Noah's ark rested on Mt. Ararat?
Is there more information on Pontius Pilate's wife?
During what years was Pontius Pilate governor of Judea?