What do the messages from the Lady of Medjugorje mean?

Praying to Holy Mary and praying the rosary are not mentioned in the Bible. But what do the messages of the Lady of Mejugorje mean? Why does Mary appear in the sky of Medjugorje?

It has been reported that beginning on June 24, 1981, the first appearance of the Virgin Mary in the city of Medjugorje occurred in the afternoon on Crnica Hill. This city is  in Bosnia – Herzegovina.[1] The second appearance of the Virgin Mary to six Croatian teenagers, often referred to as seers, occurred on Thursday, June 25, 1981.[2] As of June 2019, it is claimed that over 500 messages have been given collectively to the same six individuals.[3] Many have wondered about the meaning of these messages. It is claimed that the messages are for the entire world. Therefore, the question we will answer is, “What do the messages of the Lady of Medjugorje mean?” What is their significance? 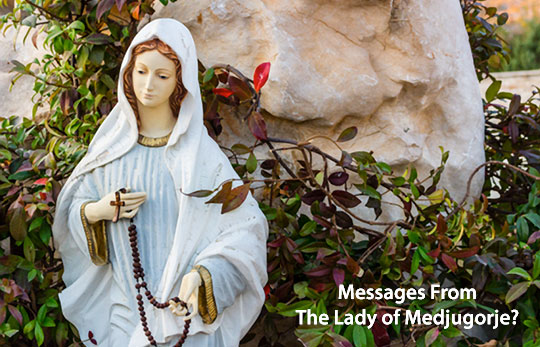 Messages of the Lady of Medjugorje

The Madonna always stresses that there is but one God and that people have enforced unnatural separation. One cannot truly believe, be a true Christian, if he does not respect other religions as well.[4]

Janice T. Connell in her book The Apparitions of the Blessed Mother at Medjugorje reports the following message.

This message is of great concern because it claims that “all religions are dear” to Christ.

Another message recorded by Janice Connell states that Mirjana, one of the teenage seers, says that she saw Mary holding the baby Jesus in her arms from 1,000 feet (300 m) away while Mary covered and uncovered Him. When Mirjana was asked how she could see and identify the tiny baby as being Jesus from that distance, the equivalent of three football fields, she replied, “I never thought about that. Probably not.”[7, 8] The reply alone reveals that the “visions” are false. They are fabricated.

Apparitions At Medjugorje Are Not From God

These three messages reveal that they are not from God or anyone else in heaven. Notice that all three messages contradict the inspired Word of God. Consequently, they are deceptive statements. For example, the first message says,

One cannot truly believe, be a true Christian, if he does not respect other religions as well.

This is a false message. Why is this message a lie? The answer is that the first and second commandments warn us to “have no other gods” and to “not worship them or serve them.” That eliminates all other religions since they have replaced the true God in their worship of another god.  It is not God’s will that we “respect other religions.” Here are the first and second of the Ten Commandments of the Decalogue.

You shall have no other gods before Me. You shall not make for yourself an idol, or any likeness of what is in heaven above or on the earth beneath or in the water under the earth. You shall not worship them or serve them; for I, the LORD your God, am a jealous God, visiting the iniquity of the fathers on the children, on the third and the fourth generations of those who hate Me . . . Exodus 20:3-5 (NASB)

. . . the people of all religions are accepted by her Son.

But the Holy Spirit says in 1 Corinthians 10:18-21 that demons are the power behind the other religions or faiths. Revelation 9:20 reveals that if people are not worshipping the one true God, they are worshipping the demons behind every false religion or idols. That is, even atheists worship something.

The rest of mankind, who were not killed by these plagues, did not repent of the works of their hands, so as not to worship demons, and the idols of gold and of silver and of brass and of stone and of wood, which can neither see nor hear nor walk . . . Revelation 9:20 (NASB)

Therefore, does Christ accept into heaven  the people of all other religions? The answer is no. They are going to hell. Listen to John 3:18,

He who believes in Him is not judged; he who does not believe has been judged already, because he has not believed in the name of the only begotten Son of God. This is the judgment, that the Light has come into the world, and men loved the darkness rather than the Light, for their deeds were evil. John 3:18-19 (NASB)

That is, anyone who participates in another religion or worships another god has been judged and all their deeds are evil. They are going to hell forever.

The third message from the Lady of Medjugorje states that,

This cannot be a message from anyone in heaven since Jesus says in Matthew 7:21-23 that only those who do the will of the Father will go to heaven.

“Not everyone who says to Me, ‘Lord, Lord,’ will enter the kingdom of heaven, but he who does the will of My Father who is in heaven will enter. Many will say to Me on that day, ‘Lord, Lord, did we not prophesy in Your name, and in Your name cast out demons, and in Your name perform many miracles?’ And then I will declare to them, ‘I never knew you; DEPART FROM ME, YOU WHO PRACTICE LAWLESSNESS.’” Matthew 7:21-23 (NASB)

Jesus stated in John 3:16 that those who believe in Him will escape everlasting punishment and gain eternal life.

Since the Lord’s Prayer reveals that the will of God the Father is done in heaven, then no saint in heaven, including Mary, and no angel would do anything that is contrary to the Father’s will. It is important to note that in Deuteronomy 18:20, God warns that those who claim to speak a “word presumptuously in My name” will die. It is only a matter of time. Then in verse 22 we are encouraged to not fear them or what they say.

Further, notice this disturbing question and answer which occurred during a question asked of Mirjana in which she says that the Blessed Mary informed her that Jesus redeemed all of the people of the world and gave them to Mary.

This sequence of questions and answers is contrary to Scripture since it states, “Jesus, her Son, redeemed all people on earth by His passion and death on the cross. Jesus gave all people on earth to His mother before He died on Calvary.” Romans 3:22-25 clearly states that those who believe in Christ have been redeemed. That is, redemption is received by faith.

. . . the righteousness of God through faith in Jesus Christ for all who believe. For there is no distinction: for all have sinned and fall short of the glory of God, and are justified by his grace as a gift, through the redemption that is in Christ Jesus, whom God put forward as a propitiation by his blood, to be received by faith . . . Romans 3:22-25 (ESV)

Redemption has not been automatically given to everyone! Therefore, Jesus has not redeemed everyone and He could not have given them to Mary. Another extremely disturbing fact is that the Bible never states that Mary is involved in the salvation in anyway for anyone. Mary appears in the Bible only prior to and at Jesus’ birth, when Jesus was twelve at the Temple, at the wedding of Cana of Galilee, at the cross and in Acts 1. No where does the authoritative Scriptures state that all people are given to Mary. No where in Scripture are we told a person’s salvation is dependent upon accepting or choosing Mary and not Jesus. Remember that Mirjana said that “Jesus gave Mary to all people on earth as the mother of their eternal life, if they choose her.” This is contradictory to John 3:16 and a vast number of other New Testament statements about eternal life. Eternal life is only available by faith through Jesus Christ. Mary has no role in the salvation plan for mankind. These visions are false and heretical. The only authority we have is the Word of God. We cannot trust apparitions and seers to communicate to us.

A careful reading of the source materials reveals that the teenagers, when questioned about their experiences, side-step many specific questions, ignore others, generalize most and make seriously heretical statements, statements that contradict the Bible. The evidence shows these so-called visions are the product of demons.

Apparitions At Medjugorje Are Demonic

Finally in Galatians 1:6-9, the Holy Spirit warns us that those who preach a gospel contrary to what Christ and the apostles preached is to be cursed, even if the message comes from an angel. We can add that includes this alleged “Mary.” We can rest assured that the true Mary, the mother of Jesus, has nothing to do with these apparitions.

I am amazed that you are so quickly deserting Him who called you by the grace of Christ, for a different gospel; which is really not another; only there are some who are disturbing you and want to distort the gospel of Christ. But even if we, or an angel from heaven, should preach to you a gospel contrary to what we have preached to you, he is to be accursed! As we have said before, so I say again now, if any man is preaching to you a gospel contrary to what you received, he is to be accursed! Galatians 1:6-9 (NASB)

John 3:36 and Acts 4:12 say that a person can be saved only in Christ and not through some other religion or god.

He who believes in the Son has eternal life; but he who does not obey the Son will not see life, but the wrath of God abides on him. John 3:36 (NASB)

Finally, Jesus states in John 14:6 that no one can come to God the Father, except through Him.

The messages provided by the six teenagers are demonic in origin. The messages attributed to the Lady of Medjugorje are deceptive and false. They are not from Mary, the mother of Jesus.